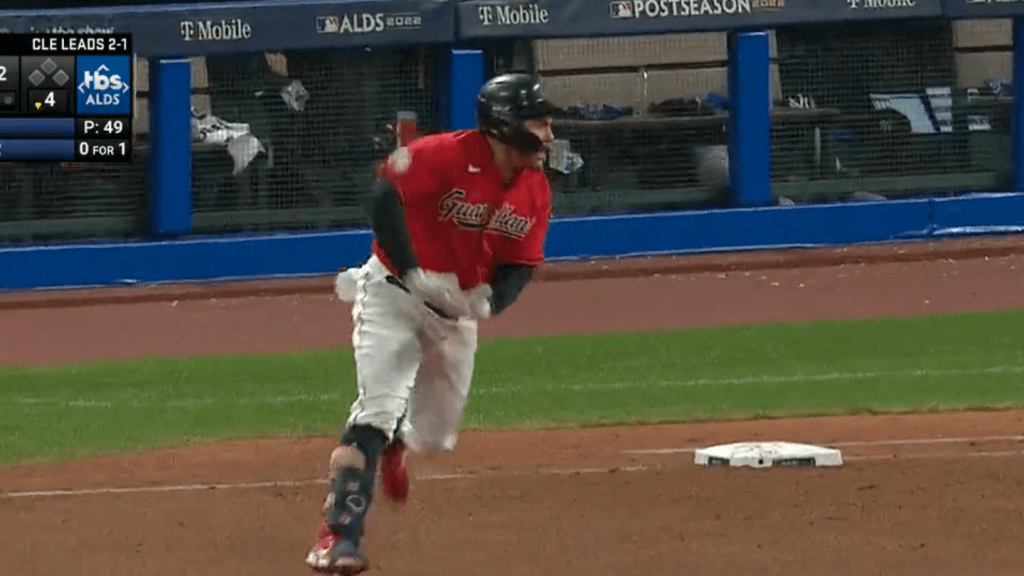 On Sunday, with the Cleveland Guardians down 3-1 in Game 4 of the ALDS against the New York Yankees — but leading the series 2-1 — Naylor blasted a solo shot off of Cole to cut the lead to one in the bottom of the fourth. It was quite the shot to right field as the Guardians looked to shock the Yankees and oust them from the playoffs.

Naylor, however, threw some spice on the home run with this celebration, where he broke out a “rock the baby” move at Cole as he trotted around the bases.

Not only that, it seemed as if Naylor said “that’s my little [expletive] son” about Cole as he was heading towards home plate.

What a wild celebration, but it’s one Naylor has used before this season when he hit home runs!

Triston McKenzie talked about Josh Naylor’s rocking the baby celebration earlier this month: “Nayls, when he hits homers off people, he calls them his son. Hence the rocking the baby as he runs around the bases.”

Sure, the Guardians were still down a run by that point, but what a weekend for home run celebrations. MLB fans approved of Naylor rocking Cole to sleep.

Josh Naylor is a psychopath. I love him. #ForTheLand

IS JOSH NAYLOR OUT OF HIS SKULL

Biden to launch plan to bring solar to low-income...

Americans Are Showing Inflation Fatigue, and Some Companies See...

Finland’s Sanna Marin says Europe would be in trouble...

The upper house of Russian parliament has ratified treaties...

These 5 companies bootstrapped their way to big businesses...

Scotland v Republic of Ireland: Who did you pick...

Microsoft Probes Outages After Teams and Outlook Go Down...

Jets at crossroads with Zach Wilson; Travis Kelce the...

Can Inflation be Curbed by Increasing Supply? (Podcast)

Brazil’s Lula sworn in as president while predecessor Bolsonaro...

EU Threatens to Walk Away From COP27 Climate Talks...

EU says it will ‘hold the Kremlin accountable’ for...

Lee Jae-yong: Why did South Korea pardon the Samsung...

US jobs growth stronger than expected as economy shrugs...

Virgil helps you buy bigger apartments in exchange for...

Gmail now learns from your behaviour, but there’s a...

Rishi Sunak and Nicola Sturgeon to hold talks in...