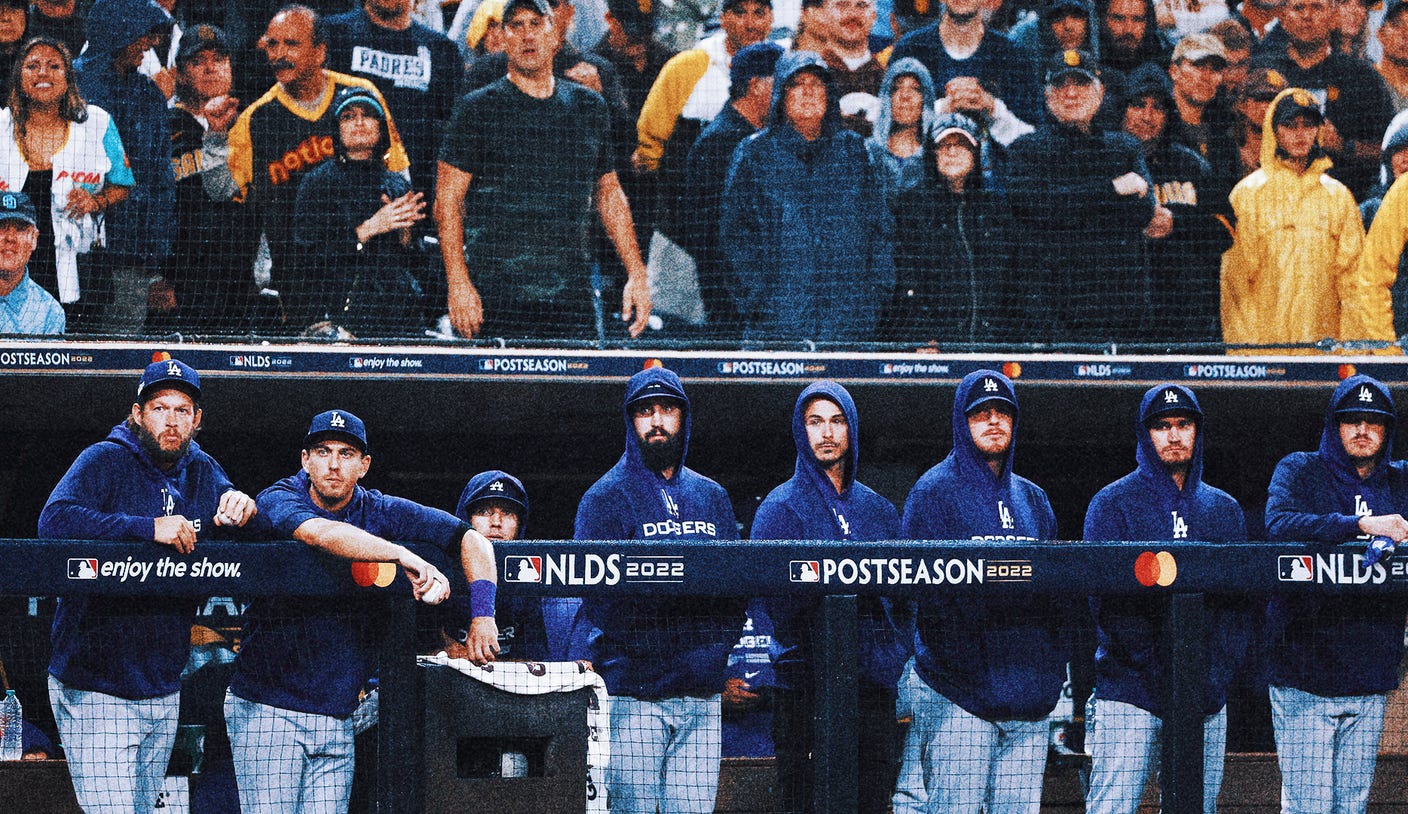 SAN DIEGO The rain began pouring. San Diego’s fans didn’t budge. They stayed in their seats, soaked, twisting their rally towels, dancing and singing to Blink-182 as the grounds crew repaired the mound at Petco Park before the bottom of the eighth inning in Game 4 of the National League Division Series.

By then, the Padres’ explosive comeback against the top-seeded, 111-win Dodgers was already complete.

“Nothing I can say is going to make it feel any better,” Dodgers manager Dave Roberts said Saturday after the Dodgers’ season came to a shocking end in a 5-3 defeat. “Obviously, we didn’t expect to be in this position.”

And after a stunning five-run Padres blitz in the seventh inning, they finished off what they couldn’t before: They finally slayed the dragon up the freeway.

The Dodgers had just wrapped up a franchise-best season. Their offense was as stacked as any during their 10 straight playoff runs. Even without a defined closer this October, they felt as capable as ever of matching up enough high-quality arms to make a championship run.

Their first test would come against a Padres team they bested 14 times in 19 regular-season matchups this season, one they swept in the NLDS en route to their 2020 World Series championship, one they had not dropped a series to all year until the one that mattered most.

Though it ended that way, that’s not how it began Saturday night for the Dodgers. They looked primed to break out of their offensive funk after entering Game 4 hitless in their last 19 at-bats with runners in scoring position.

Roberts didn’t think his offense was exhibiting its usual patience. The skid stretched to an 0-for-20 mark with a flyout in the first inning, but Freeman the NL hits leader who helped turn a formidable Dodgers lineup into the best in baseball ended the drought with a two-run double in the third.

That, plus Tyler Anderson’s five shutout innings, had zapped the energy from Petco Park.

Presented the chance he craved, Anderson delivered. The veteran lefty went to the Dodgers for the opportunity to win, to pitch in the postseason, something he hadn’t done since 2018. He was a different player now than the one who arrived to the Dodgers at Spring Training. He had completed his transformation from long reliever to starter to All-Star, vaulting to heights unseen previously in his seven-year career.

On Saturday, the Dodgers put their season in his hands. He did everything asked of him.

“I would’ve thrown 150 pitches if they would’ve let me,” Anderson said.

He would get 86 instead, his night ending after retiring 10 of the last 11 batters he faced.

Soon after his departure, pandemonium ensued.

“You never second-guess that situation,” Anderson said. “We have an unbelievable bullpen. They’ve been so good all year, and they’ve helped us win so many games this year. You understand, try to piece this thing together until the end and get us to tomorrow.”

The Padres had other thoughts.

Every Dodgers reliever who entered in the seventh and eighth innings fell victim to San Diego’s persistent fusillade. Freeman had seen that kind of underdog ascension before. Just last year, his 88-win Braves team shocked the world on their route to the World Series, topping the Dodgers on the way.

“You always seem to get those double plays when you need them, that hit that gets through,” Freeman said.

This time, they were happening on the other side.

After mustering just two hits in five innings against Anderson, the Padres recorded two hits off reliever Chris Martin in the sixth inning, though he escaped unscathed. The Dodgers wouldn’t be so lucky in the seventh, when each of the first five Padres batters reached base. They recorded two hits against Tommy Kahnle and another two against Yency Almonte. Surprisingly, Evan Phillips, the man the Dodgers turned to in leverage more than any reliever this year, was not part of the equation as the season slipped away.

But Almonte seemed to settle in, retiring two straight batters to keep the game tied when something strange happened. He threw one pitch, a ball to Jake Cronenworth, before being pulled. Catcher Will Smith and Roberts both said there was a miscommunication as Alex Vesia warmed up in the bullpen getting ready for the lefty-lefty matchup.

“We missed a throw-over to buy a little bit of time, so Alex inherited a 1-0 count,” Roberts said. “I still liked the matchup right there. Cronenworth put a good swing on the 2-2 pitch.”

The swing, a two-run single up the middle off Vesia, provided the dagger.

By the time Phillips entered in the eighth inning, striking out all three batters he faced, the damage was done. The party had begun. For the first time since 2006, Padres fans were witnessing a home playoff series in person. And for the first time since the Padres went to the World Series in 1998, their playoff ride will now continue past the National League Division Series.

“It’s just disappointment,” Freeman said. “We had a really good team. We just didn’t get it done.”

The Dodgers would get one last chance.

In the ninth inning, it was Mookie Betts, Trea Turner and Freeman against Josh Hader. The vaunted trio, the one that guided the best offense in baseball all season, went down in order.

“You play the game to win a World Series,” Betts said. “To come up short, it’s a sudden end. It sucks. But there’s nothing else we can do now.”

Roberts said nobody on the Dodgers would consider it a wasted season, but the disappointment was palpable in the visiting clubhouse as hugs were handed out and goodbyes were said.

The five-seed Padres will move on to face the six-seed Phillies in the National League Championship Series. The Dodgers, meanwhile, will have the offseason to consider the worth of a 111-win season that included one playoff win.

“They played better than us,” Clayton Kershaw said. “It’s hard to admit sometimes, but that’s the truth of it. They just beat us.” Rolex, Gucci and more: The best luxury watches you...

I spoke with Mead about diversity comments – Wright

Oral-B’s latest electric toothbrush has an ‘AI companion’ to...

Democrat in one of nation’s most competitive races has...

‘All Quiet on the Western Front’ Director on Netflix...

Street Fighter 6’s modern controls made me OK at...

Carolyn Hax: A mom struggles to understand her trans...

Endangered gray wolves are being poisoned in Washington State,...

Telemedicine startups can survive and thrive under renewed regulation...

Marines halt use of new amphibious vehicle at sea...

Covid in Wales: Exam help to continue for GCSEs,...

Fact check: Arrests were made inside Capitol building on...

A big bash for both sides of the aisle

Meta hit with antitrust breach order in Turkey for...

Husband Dragged After Confronting Wife for Not Cleaning His...

Zoom signs up its fastest partner yet with Oracle...

Rivian recalling nearly all its vehicles over loose fastener

Koop launches with $5 million in funding to capitalize...

Hitting the Books: The decades-long fight to bring live...

The Crown: Cast defend criticism of Netflix show at...

This Google Docs update wants to solve your most...

Creative’s new noise-canceling earbuds give you a reason to...