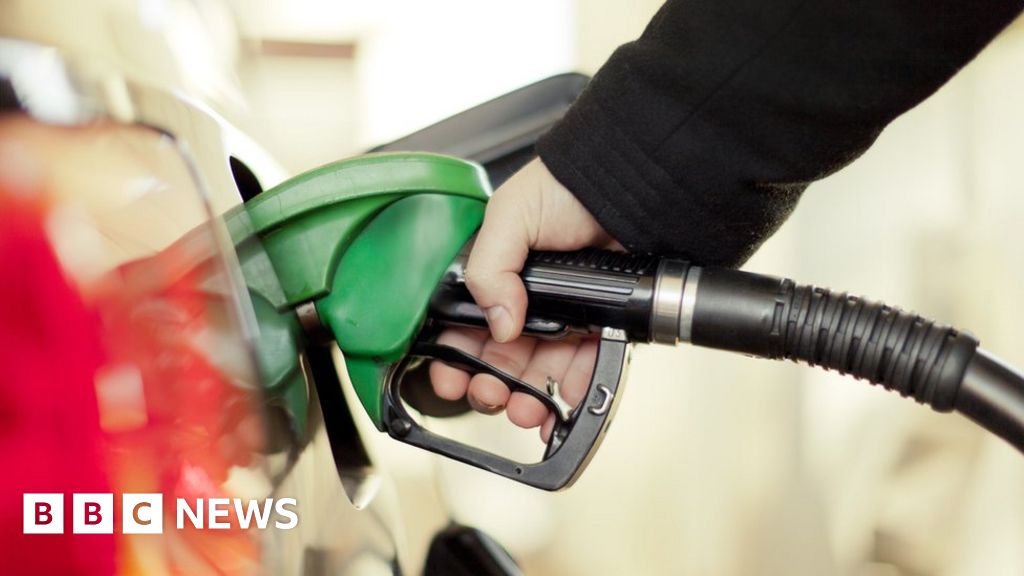 A litre of petrol sold at UK forecourts has reached its highest level since September 2012, at 140.22p on average, according to RAC data.

Drivers are paying on average 22% more to fill up their petrol tanks than this time last year, the RAC said.

Diesel prices are also surging and are now just 4p off their April 2012 highs.

The bad news for drivers follows the temporary closures of many UK forecourts after they ran out of fuel.

But it’s global oil prices, rather than supply chain disruption, that the RAC thinks is the main driver of higher prices at the pump. A barrel of crude oil has doubled in the past year.

Average petrol prices are just 2p off their record high from April 2012 of 142p per litre, says the RAC.

Gabby Petito: What do we know about the case...

Three Ways to Get Into Elected Office

Bloomberg Quicktake's Scalet Fu sits down with Elaine Chao to talk politics, money and how newcomers get into elected office.
Read more

Chris Diamantopoulos builds a hot career, on screen and...

If you get a sense of déjà vu when you see actor Chris Diamantopoulos on screen, but can't place his name, he's OK with that
Read more

Ben Simmons could be on the move.
Read more

Best power banks in the UAE: the best portable...

Whether you're after a slim power bank for phones or a large bank to juice up your tablet, here are the top portable chargers.
Read more

Two unions representing party workers say they would be prepared to take action if cuts are enforced.
Read more

The IMF has upgraded both its UK and global forecasts compared with what it projected in January.
Read more

Many employees are returning to the office after more than a year away during the coronavirus pandemic. Companies are weighing keeping remote work and requiring employees to be vaccinated. Mola Lenghi takes a look.
Read more

For all that the jury in the Elizabeth Holmes trial has heard about the startup’s blood tests being unreliable, the Theranos Inc. founder says customers liked her product because it was cheap.
Read more

Boris Johnson says a "mob" was "intent on violence" at a Kill the Bill protest in Bristol.
Read more

The Latest: US health officials warn of false positives

U.S. health officials are warning health professionals about the risk of false positive results with a widely used laboratory test for COVID-19 and flu
Read more

Biden to Require Nursing Homes to Vaccinate Staff to...

President Joe Biden plans to announce Wednesday that his administration will require nursing homes to vaccinate their staff against the coronavirus in order to receive federal funding, a person familiar with the matter said.
Read more

The Netherlands suffered a shock Euro 2020 exit to the Czech Republic but one man took the blame.
Read more

Registered voters are split in their opinions of President Biden's health and mental fitness, according to a new poll. The Politico/Morning Consult ...
Read more

Nearly 11,000 U.S. facilities discharged pollutants into local waters beyond the levels allowed under the law, according to a report from an Environmental Protection...
Read more

How today’s primaries will shape the election

Some Indonesian students return to schools, at a distance

LeBron James was fined $15,000 for an obscene gesture Friday by the NBA, which also warned the Lakers superstar about using profane language.
Read more

Rep. Elise Stefanik, R-N.Y., was elected to be the No. 3 House Republican during a party conference Friday.
Read more

Germanys Greens narrowed the gap to Chancellor Angela Merkels conservative alliance to one percentage point in the latest Insa poll for Bild am...
Read more

NHS England call for pregnant women to get Covid...

NHS England says the number of pregnant women seriously ill in critical care with the virus has grown.
Read more

The largest nonprofit hospital system in Texas will require that employees get vaccinated against the coronavirus. Baylor Scott & White Health will...
Read more

The U.S. economy grew at a robust annual rate of 6.4% in the first three months of this year, unchanged from the government’s initial estimate
Read more

"I walk a tightrope every day on this, but we've got to fight for it," the BBC director general says.
Read more

The Biden administration is sharing 55 million doses of COVID-19 vaccine globally by the end of the month with Latin American, Caribbean, Asian and African countries, the White House announced Monday.
Read more

The COVID-19 death of a popular comedian has prompted an outpouring of grief across all sectors of society in Brazil, a nation otherwise deeply divided over how to cope with the disease
Read more

UK government admits it was wrong over lawmaker lobbying

Wales' first minister has said tourism could start to reopen from 27 March if case rates stay down.
Read more

Covid: Difficult winter in Wales if cases continue to...

Redditors Are Right About the Unfairness of the Market

It’s been a bad week for capitalism, with corporate insiders, judges and policy makers all playing fast and loose with the rules about personal investments.
Read more

There were zero protesters arrested the night before in Brooklyn Center.
Read more

Biden told allies in June US would ensure Kabul’s...

President Biden told allies in the Group of Seven back in June the U.S. would ensure Kabul’s stability after withdrawing from Afghanistan, a British diplomatic memo obtained by Bloomberg showed.
Read more

With Subtropical Storm Wanda, meteorologists run out of names

As Subtropical Storm Wanda forms over the Atlantic Ocean, meteorologists have exhausted the list of names used for storms during Atlantic hurricane season.This marks the second time in two years and the third time...
Read more

Kyle Coetzer will captain an experienced Scotland side for next month's T20 World Cup in the UAE and Oman.
Read more

White House press secretary Jen Psaki said on CBS that the videos were inconsistent with the value of the administration, and vowed to pursue an investigation.
Read more

The editorial board of St. Louis Post-Dispatch called for the disbarment of Rudy Giuliani and other lawyers who claimed, along with former President Trump, that the 2020 election was "stolen."...
Read more

15-year-old Tariq Abu Khdier, who was arrested in a protest over his cousin's murder, returned home to Florida with injuries and a new understanding of freedom. Charlie Rose reports.
Read more

Attorney General Merrick Garland announced the Justice Department is suing Georgia over its new voting law for allegedly "denying or abridging the right of Black Georgians to vote on account of their race." He also had a warning for other states considering s…
Read more

England are keen to give a "better showing" of themselves in their five-Test series against India, says James Anderson.
Read more

The 21-year-old posted a video on YouTube addressing the recent accusations, saying he believed they were 18.
Read more

New Vatican law criminalizes abuse of adults, even by...

Afghanistan: The pledge binding al-Qaeda to the Taliban

The history of the complex relationship between the two groups.
Read more

Two major vaccine mandates one by the state, requiring the shot for all health care workers, and one by the city, making it...
Read more

Will Cain: Ben Crump is ‘the most dangerous man...

Restaurant chains including McDonald's and KFC are paring back $5- and-under "value" items in favor of more expensive $10- to- $30 combination meals.
Read more

Thailand to Reopen Phuket to Vaccinated Tourists From July...

Thailand will waive quarantine requirements for vaccinated visitors arriving on the resort island of Phuket from July 1, the first key reopening for the tourism-reliant nation.
Read more

Many casualties are feared after an explosion hits a Shia mosque during Friday prayers in the Afghan city of Kandahar.
Read more

ENERGY BILL FIZZLES (FOR NOW) — NEXT UP: SCHOOL...

Presented by Facebook Happy Wednesday, Illinois. Lots to celebrate this month. Along with Juneteenth coming up (Illinois Playbook won't publish this Friday to honor...
Read more

Unusually low temperatures mark the arrival of winter for much of eastern Australia as cool air travels up from Antartica.
Read more

Asian shares mostly decline ahead of watched US jobs...

Asian shares are mostly lower as investors await a much watched U.S. jobs for indications of how the recovery from the pandemic is faring
Read more

Former Ivory Coast President Laurent Gbagbo vowed on Sunday to continue in politics "until my death" as he launched a new party following his acquittal by the International Criminal Court and return from a decade abroad.
Read more

You Can Measure This Fundamental Quantum Constant Using LEDs

Planck’s constant helps us understand atomic-sized things. One of the best ways to grok it is through this experiment involving different colors of light.
Read more

A group of businesses and political organizations in Oregon are suing the state's governor over her extension of a state of emergency declared in response to the COVID-19 pandemic....
Read more

South Korea will relax social distancing rules and allow private gatherings of up to six people in the greater Seoul area from the current four starting July 1, the government said on Sunday.
Read more

EXPLAINER: How months of tensions led to Sudan’s coup

The military coup in Sudan threatens to wreck the country’s fragile transition to democracy, more than two years after a popular uprising forced the removal of longtime autocrat Omar al-Bashir
Read more

Trump reemerges on the trail and plays the hits...

In North Carolina, the former president took aim at Biden and Fauci and — falsely — claimed the 2020 race was stolen.
Read more

‘Levelling up’ must be more targeted, say peers

Critics of Brazil’s president being targeted by security law

Police in Brazil are starting to employ a dictatorship-era national security law against critics of President Jair Bolsonaro, while lawyers and activists rally to provide them with legal help and accuse the government of trying to silence dissent
Read more