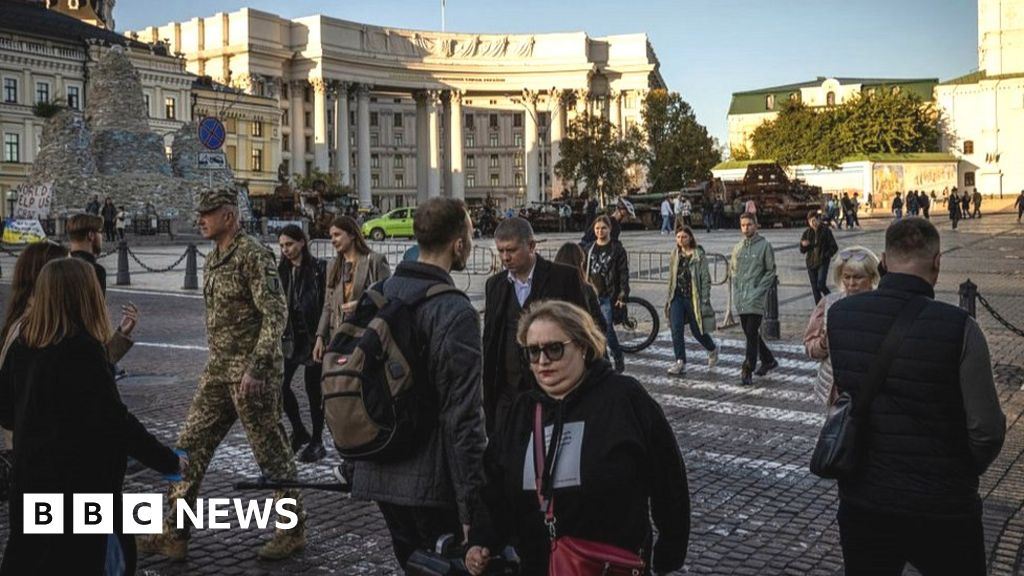 Ukraine’s state energy operator has urged Kyiv residents to cut down on electricity use in the evenings, after a Russian missile strike disabled a power installation near the capital.

The request was not confined to Kyiv.

The deputy head of Ukraine’s presidential administration, Kyrylo Tymoshenko, said the populations of Zhytomyr, Cherkasy and Chernihiv should also save electricity.

“If this advice is ignored, we will have difficulties and it will be necessary to take out the candles,” he warned on Telegram.

Ukrenergo has urged residents to save electricity in the evening by not using energy-guzzling appliances, switching off unnecessary lighting and doing their washing at night.

However, the BBC’s Paul Adams reports that Kyiv streets are already darker than usual at night, but “life very much goes on”.

Kirill Stremousov, a Russian-appointed leader in the southern region, said Ukrainian shelling was coming from the Dudchany area, on the west bank of the Dnieper river (called Dnipro by Ukrainians).

Advancing Ukrainian forces have repeatedly bombarded bridges over the river, aiming to cut off Russian troops in Kherson city.

Russian-installed officials in the city have urged Moscow to help transfer Kherson families to Russian cities as Ukrainian shelling intensifies.

President Vladimir Putin has declared Kherson and three other Ukrainian regions to be part of Russia – a move condemned internationally, after hastily-organised so-called referendums in the regions.

Meanwhile, Ukrainian prosecutors have accused Russian “military” of shooting and killing the conductor of Kherson Regional Philharmonic Orchestra, Yuri Kerpatenko, in his home. It is widely reported on Ukrainian media, but there are few details. He is said to have refused to co-operate with the occupation authorities

On Friday President Putin said he saw no need for further massive missile strikes against Ukraine “for now”, on the scale of last Monday’s, which hit Kyiv and other cities, killing at least 20 civilians. Mr Putin said those strikes were retaliation for the attack that damaged Russia’s huge Kerch bridge – a key strategic link to annexed Crimea.

Another focus of fighting in the south is Zaporizhzhia – Ukrainian officials in the city say it was hit by more Russian missiles and Iranian-made Shahed “kamikaze” drones overnight. There was damage to energy facilities and industrial infrastructure there.

The Zaporizhzhia nuclear power plant – Europe’s largest – lies just south of the city, under Russian control, and repeated shelling in the area has raised fears of a nuclear disaster.

The US has announced $725m (£649m) of further military aid for Ukraine, including ammunition for Himars rocket systems, artillery rounds, anti-tank weapons and Humvee armoured vehicles. The US has provided more than $17bn of military aid since Russia’s 24 February invasion – by far the largest contribution among Ukraine’s Western allies.

On Ukraine’s northern border, Belarus says a new Russian military contingent has arrived – part of what it describes as a regional border protection force. Belarus has hosted Russian forces involved in the war in Ukraine, including those who launched an abortive assault on Kyiv. But so far it has not sent its own troops across the border.

Adidas Is a Short Walk for New CEO, But...

Ukraine launched ‘successful’ counteroffensive in Kharkiv, could push to...

Trump’s hope for a U.K. summer swing are scrambled...

The best Apple deals ahead of Amazon Prime Day...

Scottish Premiership clubs to discuss VAR, with vote before...

On trip to Iran, Vladimir Putin wants to show...

Microsoft helps speed up work on AI for autonomous...

Cost of living: Calls for targeted help to cut...

Ford will reopen F-150 Lightning orders this week at...

Estonian PM tells nation to prepare for blackouts if...

After a year, omicron still driving COVID surges and...

Germany to Sell $458 Million Stake in Lufthansa After...

Dear Sophie: What can we do to help employees...

How digital health startups are navigating the post-Roe legal...

Grubhub and Gopuff team up for grocery and alcohol...

White House clash with Pelosi over Taiwan spills into...

Opinion | With Roe Gone, the War Over Abortion...

The Minnesota Vikings hosted a tryout and a visit...

Texas power use to break records again this week...

Snap sues US Patent Office to claim a trademark...

Putin Building Anti-West Global Alliance as He Tries to...