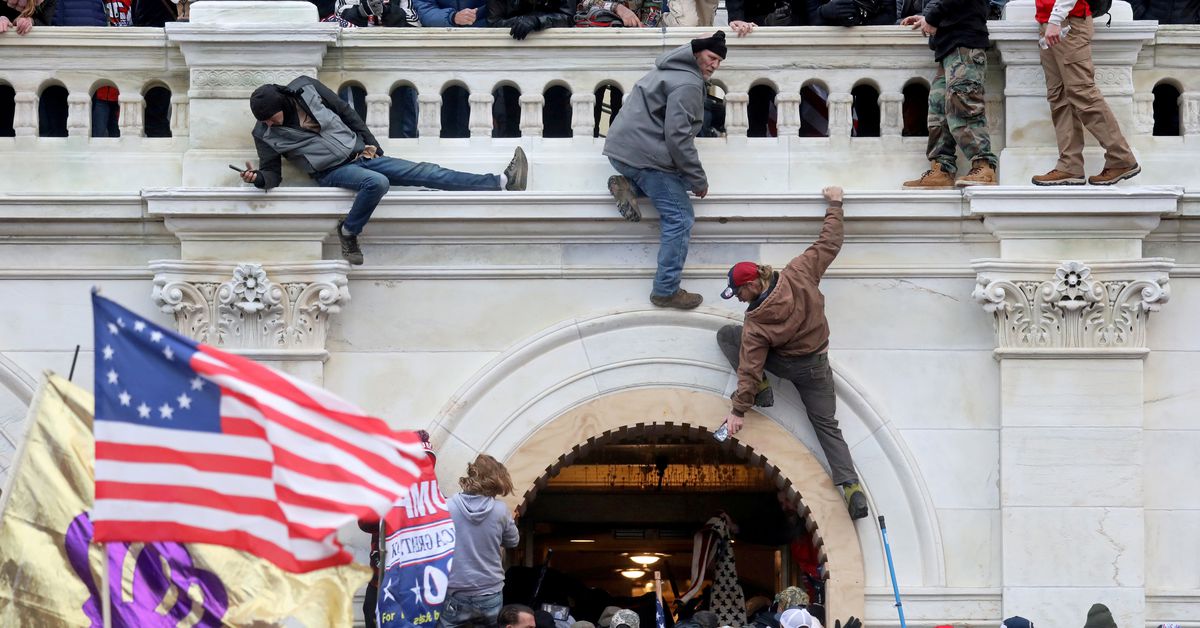 WASHINGTON, Oct 15 (Reuters) – Federal prosecutors on Friday accused a U.S. Capitol Police officer of urging a participant in the Jan. 6 attack on the government building to destroy Facebook posts showing him inside, warning that he could be prosecuted.

In a six-page indictment, prosecutors said that Michael Riley, a Capitol Police officer for more than 25 years, had become a Facebook friend with the suspect identified as “Person 1” on Jan. 1 and then direct messaged the individual on Jan. 7.

“Hey (Person 1), im a capitol police officer who agrees with your political stance,” Riley said in the message. “Take down the part about being in the building they are currently investigating and everyone who was in the building is going to be charged.”

Hundreds of supporters of former Republican President Donald Trump stormed the Capitol building on Jan. 6 in a failed attempt to overturn his election defeat. Four people died in the violence, more than 100 police officers were injured and four officers in the crowd that day later died of suicide.

Prosecutors say Riley exchanged “dozens more” direct messages with the riot suspect on Jan. 7, including one in which he wrote his Facebook friend “Im glad you got out of there unscathed. We had over 50 officers hurt, some pretty bad.”

Riley could not be reached for immediate comment, he was due in court later on Friday.

The reports come as Facebook's WhatsApp starts to roll out a disappearing photos and videos feature.
Read more

North Korea's defense chief was publicly executed for allegedly talking back to Supreme Leader Kim Jong-un and falling asleep during an meeting, according to South Korea's spy agency.
Read more

Large sets of patient health records can be useful to medical researchers. But preserving the privacy of the individuals involved is a problem. Techniques for making the data anonymous have been called into question by data scientists. Now, algorithms can cra…
Read more

Meet the donors at the heart of the latest...

Rep. Jeff Fortenberry faces charges of lying to the FBI. Even after the DOJ stepped in, the middleman continued to give.
Read more

Bam Adebayo's buzzer-beater clinches a 109-107 victory for the Miami Heat over the Brooklyn Nets, who lose Kevin Durant to injury.
Read more

Covid: Vaccine target for 16 and 17-year-olds and lockdown...

GPs say more time is needed to warn patients about the transfer of their medical information to a database.
Read more

Unilever, the owner of Dove, Vaseline and Axe, is dumping the word "normal."
Read more

Student who stood up to Hitler and inspires Germany

Germany marks the 100th anniversary of the birth of Sophie Scholl, who was killed defying the Nazis.
Read more

Nykaa is adding a shimmer to Indian tech listings. Former investment banker Falguni Nayar’s mostly online beauty store is growing fast by selling lipstick, epilators and sneakers to a loyal band of millennials in far-flung cities where it can often be tricky …
Read more

Arizona Republican Who Called for New Election Says She...

The state senator appeared to be responding to the Cleveland Indians' decision to rename the team Cleveland Guardians.
Read more

Throughout your voyage, you’ll see, feel and live Star Wars, which includes the possibility of meeting heroes of the Resistance like Rey and Chewbacca, or encountering the malevolent Kylo Ren of the First Order. But the starcruiser also brings with it a host …
Read more

Bipartisan infrastructure talks in dire state ahead of pivotal...

The talks are in acute danger of collapsing after a weekend of fruitless discussions.
Read more

Tyler Barriss said he is willing to accept punishment for a fake 911 call that led to a deadly police shooting. Jacob Albracht of CBS affiliate KWCH-TV reports from Wichita, Kansas.
Read more

England break India's resistance to surge to victory by an innings and 76 runs in the third Test at Headingley and level the series at 1-1.
Read more

In a statement published hours after Pfizer signaled its intention to file for emergency use authorization for a COVID-19 booster shot, the FDA and Centers for Disease Control and Prevention (CDC) said fully vaccinated Americans “do not need” an extra dose at…
Read more

Australia Central Bank to Keep Stimulus Even as Economy...

Australia’s central bank will maintain its highly supportive policy settings despite surging growth and falling unemployment, as it faces up to the even bigger challenge of lifting wages and inflation from record lows.
Read more

Stacey Abrams on Monday did not directly respond to a question about a potential presidential bid, instead saying that she is focused on getting voting rights legislation passed.During an appearance on CNN, host Er...
Read more

Earlier this year, a section of cliff and some homes' gardens were lost to a beach below.
Read more

'He's someone I look up to as a young person,' said one of the visitors paying their respects to HRH Prince Philip.
Read more

Another violent weekend in Atlanta area leaves at least...

At least 24 people were shot and four people died in separate shootings over a bloody weekend in the Atlanta area amid an ongoing string of violence.
Read more

California man arrested over theft of 42,000lbs of pistachios

Police have cracked the case of 42,000lbs of pistachios that went missing from a plant this month.
Read more

COP26 climate summit president says progress made, but not...

Altice could be set to increase its stake in...

Altice UK is free from its pledge not to launch takeover bid in less than a month.
Read more

Biden to vaccine mandate legal challengers: ‘Have at it’

I was watching in awe – Konta on Raducanu’s...

The move comes as the contagious Delta variant of the coronavirus grips the nation.
Read more

Vice President Harris said Monday that the Biden administration is "singularly focused" on evacuating American citizens, Afghan allies and at-risk Afghans and that questions about the chaotic withdrawal from Afghanistan w...
Read more

How Long Will Boosters Last?

In this week's edition of the Covid Q&A, we look at boosters. In hopes of making this very confusing time just a little less so, each week Bloomberg Prognosis is picking one question sent in by readers and putting it to experts in the field. This week's quest…
Read more

Elder’s ex-fiancee said he brandished a gun at her

Alexandra Datig, who broke off her engagement with the California gubernatorial candidate in 2015, describes a series of troubling encounters with him.
Read more

Canada’s main stock index rose above 20,000 for the first time, aided by a gain in energy shares, a rotation to value stocks and global economies emerging from the depths of Covid-19 lockdowns.
Read more

Asian stocks look set to rise following record highs in the U.S. after the Federal Reserve unveiled an expected tapering of stimulus and said it will be patient on raising interest rates. The Treasury yield curve steepened.
Read more

Lord Bethell to be investigated by standards watchdog

China's military said on Monday it had carried out beach landing and assault drills in the province directly across the sea from Taiwan, though it did not link the exercises to current tensions with Taipei.
Read more

CDC: Vaccinated Americans can go maskless outdoors in many...

CDC Director Rochelle Walensky announced the guidelines, saying the agency had made the changes after studying how likely vaccinated people are to transmit the virus.
Read more

A judge has ruled that there was a real prospect the Real IRA attack could have been stopped.
Read more

Elon Musk sold Tesla Inc. stock for a seventh consecutive trading day, bringing him almost halfway to his promise to unload 10% of his stake in the electric car-maker.
Read more

Your Roku smart TV may lose the YouTube app...

A spat between Roku and Google means that the YouTube and YouTube TV streaming apps could be banished from the Roku platform.
Read more

Afghan interpreter who helped rescue Biden: ‘If they find...

An Afghan interpreter who helped President Biden when he was a U.S. senator on a visit to Afghanistan again pleaded for help from the White House, saying if the Taliban find him "they will kill me."Appearing on ...
Read more

Happy Thursday, Illinois. Anyone else following CDC Twitter updates like you check the weather? PROGRAMMING NOTE: I'm taking time off next week, so email...
Read more

‘Watch out for the cicadas’: Biden takes a hit...

Norwich's resistance against relegation continues as they more than match Wolves in a goalless draw at Carrow Road.
Read more

Two railway operators say disruption will continue into Sunday after cracks were found in some trains.
Read more

Derrica Wilson, co-founder of Black and Missing Foundation, joins “CBS Mornings.” She discusses the importance of giving just as much attention to cases of missing people of color as cases of missing White people.
Read more

Welcome to Bloomberg Green’s special newsletter on the latest from COP26 in Glasgow, Scotland. All climate coverage is free to read during the summit.
Read more

Early Prime Day TV deals have arrived and you can score a cheap 4K Fire TV with prices starting at just $99.
Read more

CBS News poll: How often do you remember your...

Officials in Italy battled wildfires that raged across the country, including in the Dannunziana forest near Pescara, where at least 100 people were evacuated.
Read more

What next for Ole Gunnar Solskjaer after his Manchester United side suffered one of their worst defeats in the Premier League at home to Liverpool on Sunday.
Read more

Adrian Beltre going into Rangers Hall of Fame with...

Much of what Adrian Beltre now hears about his Hall of Fame-caliber career comes from his son, a baseball fanatic who grew up in the Texas Rangers clubhouse during his father's last eight big league seasons.
Read more

Percentage of Americans who have tried marijuana rises to...

Nearly half of U.S. adults say in a new poll that they have tried marijuana, as more states move to green-light legislation leg...
Read more

Jeanine Pirro slammed Joe Biden Saturday on “Justice with Judge Jeanine” for being a “puppet” in the White House, asking who was really “pulling the strings.”
Read more

00:00Copyright (c) 2013 Microsoft Corporation. All rights reserved. Do you think that if we do see this these the output has been raised? It looks like...
Read more

The public wants a government that "that sticks to the rules" over gatherings after a party was held in Downing Street in lockdown, says Labour.
Read more

More than one million COVID-19 vaccine doses have been administered in the past 24 hours, according to the White House, including more than 550,000 first doses. Thursday marks the first time ther...
Read more

Virgin Galactic gets FAA nod to send passengers into...

Biden congratulates US Olympians: ‘You made me so damn...

President Biden on Saturday congratulated the Olympic athletes who represented the United States in Tokyo this summer, telling them "you made me so damn proud." ...
Read more