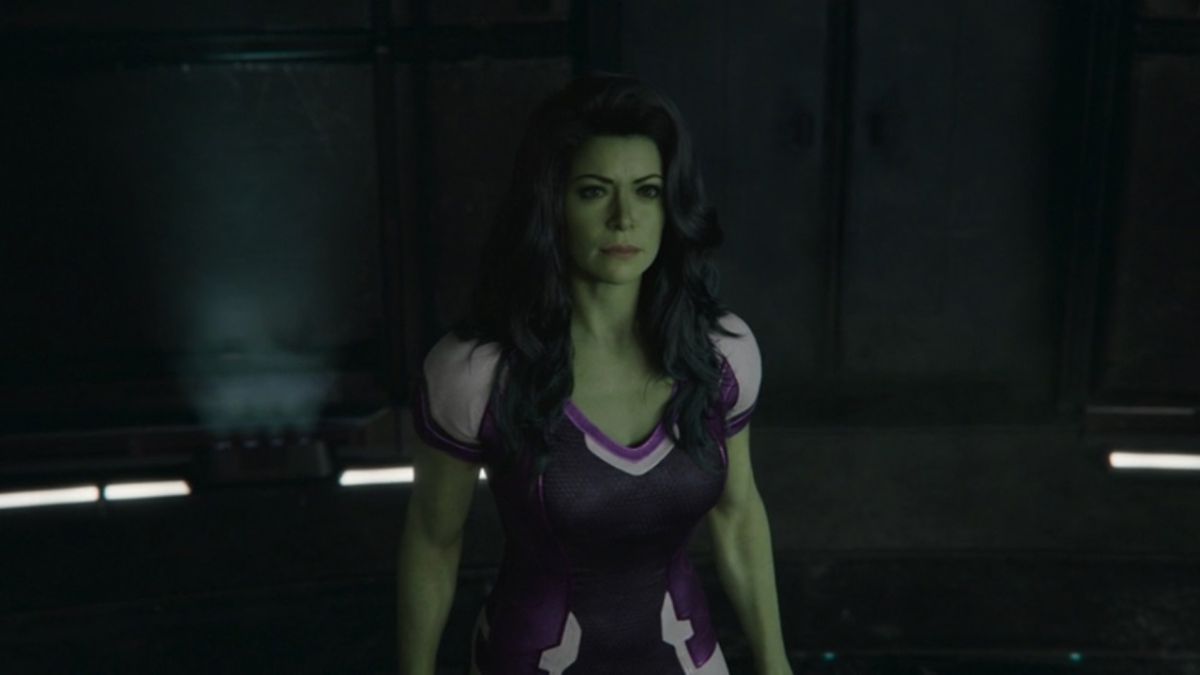 She-Hulk: Attorney at Law’s final episode has smashed its way onto Disney Plus – and there’s a lot to unpack from the 30-minute long season finale.

The latest MCU Disney Plus show seemed like it’d follow the usual Marvel project formula by ending things with an over-the-top, CGI-laced battle. However, for a subversive, fourth wall breaking show like this, we should’ve expected anything but. It’s delightful, then, that She-Hulk episode 9 – titled Whose Show is This? – throws out large parts of the MCU rulebook in favor of one of the best MCU TV show endings in a long time.

Below, we’ll walk you through the biggest talking points from She-Hulk’s final episode. That includes who that new Hulk character is, when we’ll see Jennifer Walters again, and the show’s first post-credits scene since episode 4.

Hulk has a son! (Image credit: Marvel Studios/Disney Plus)

She-Hulk episode 9 is full of important, humor-filled talking points, but let’s get the biggest one out of the way first. Who is Skaar, the alleged son of Hulk?

For that, we need to dig into Marvel comics. Created by Greg Pak and John Romita Jr, Skaar made his comic book debut in What If? Planet Hulk #1 in December 2007. He’s comparatively new to the Marvel universe when it comes to the comic giant’s extensive gallery of superheroes and villains, then.

In the comics, Skaar is the progeny of Hulk and an extraterrestrial being called Caiera the Oldstrong. The pair conceive Skaar during Hulk’s time on Sakaar, aka the planet we saw in Thor: Ragnarok, which just so happens to be Caiera’s home. That conception takes place during the Planet Hulk storyline, which ran from 2006 to 2007.

After Hulk leaves Sakaar, Skaar emerges from a cocoon – but, rather than emerging as a child, he’s already a pre-teen. Over the next 12 months, Skaar matures rapidly, developing the skills, intelligence, and emotions (for a Hulk anyway) of a fully formed adult. Later in the comics – for reasons we won’t spoil – Skaar is forced to leave Sakaar and heads to Earth, where he hopes to track his father down and kill him for abandoning Skaar and his family.

From a superpower perspective, Skaar possesses all the abilities you’d expect a Hulk to have. That includes the power to transform into a human, superhuman strength, endurance, durability, stamina, senses, and accelerated healing factor. He’s also a great swordsman, skills which he developed while fending for himself against Sakaar’s deadly fauna.

What sets Skaar apart from other Hulks, though, is his tectonic energy powers. Through an item known as the Old Stone, as well as the genes Caiera passed down to him, Skaar can manipulate lava and stone by drawing energy from Sakaar.

It’s unclear if Skaar will have all of these abilities in the MCU. He’s only briefly introduced in She-Hulk’s final minutes, with Hulk crashing a Walters family barbeque – complete with an appearance from Matt Murdock – to introduce Skaar to his extended family. Visually, the MCU’s version of Skaar looks different to his comic book counterpart, so it’ll be interesting to see if his powers carry over from Marvel’s source material.

Interestingly, the arrival of Skaar – who is played by Stargirl’s Wil Deusner – in the MCU sets up a number of possible Hulk-starring storylines. Currently, Marvel doesn’t own the rights to Hulk – those belong to Universal, which is why we haven’t seen another solo Hulk movie since 2008’s The Incredible Hulk. However, the rights to the Hulk reportedly revert back to Marvel in 2023, which means we could finally see another Hulk-centric Marvel movie in the near future.

So, what’s the most likely storyline that could be adapted for a new Hulk superhero film? World War Hulk would be the most obvious, but there’s always the potential that Marvel could pick something more out there, such as Fall of the Hulks or Incredible Hulks.

There had been rumors that Marvel Studios president Kevin Feige would make an unexpected cameo in She-Hulk’s finale. And, while this turned out to be true, it’s the nature of his brief appearance that makes for such compelling and amusing viewing.

With Jennifer Walters unhappy at how the final episode of her standalone TV show is going, she literally breaks the fourth wall, escaping through the Disney Plus homepage and into what we think is the real world.

After a couple of brief run-ins with She-Hulk’s writers’ room and security forces guarding Kevin Feige’s office, She-Hulk finally comes face to face with Marvel’s head honcho – except it’s not the Kevin Feige that we know.

Heavily inspired by The Matrix’s Architect, GLaDOS from the Portal videogame series, and 2001: A Space Odyssey’s HAL, the MCU’s version of Kevin Feige is revealed to be a sentient robot who oversees every Marvel Studios project. Dubbed K.E.V.I.N – Knowledge Enhanced Visual Interconnectivity Nexus – this advanced, algorithm-driven A.I. is said to come up with the storylines for every Marvel film and TV show.

It’s all very meta, but it’s highly entertaining nonetheless. K.E.V.I.N even comes equipped with a baseball cap-style visor over its three eyes – a funny nod to Feige’s penchant for wearing this type of hat wherever he goes.

Speaking to Marvel.com (opens in new tab) post-season finale, head writer Jessica Gao said: “It’s funny because I’ve seen a lot of online chatter of people speculating that [Marvel Studios president] Kevin Feige is going to make a cameo in the show. But I can’t imagine this is how they thought that the cameo would happen!

“I think I probably wrote like, 20 versions of a finale that went all over the place and I started feeling like, ‘Well, this is a Marvel show, I better give them the classic Marvel ending’. Big villain fight, big finale. But it never felt right because I was trying to fit a square peg in a round hole.

“[Kevin] really opened my mind to the idea that it’s OK to not do that because I was trying to do what I thought was the Marvel expectation of what the show had to be. He was like, ‘Why? No one’s telling you to do that, you don’t have to do that, you can do something completely different, we should be doing something completely different because this show is so different from anything that Marvel has done.’ It was getting that permission from him that really made me think, ‘Oh.’ It just changed everything.”

So there you have it: Kevin Feige is canon in the MCU. Just not in the way we all expected.

Wong’s back to break Blonsky out of jail. Again. (Image credit: Marvel Studios/Disney Plus)

After weeks without one, we got a fifth and final post-credits scene in this MCU Phase 4 project.

The scene opens with Emil Blonsky back in prison after he broke his parole ruling and turned back into Abomination. Blonsky’s reasoning was that he only transformed into his Hulk-like alter-ago for seminars and public appearances to earn money. Given this violates his release from prison, though, he’s sent back to jail for another 10 years.

Or so we think. Just like he did in Shang-Chi, Wong – everyone’s favorite supporting character – appears via a portal and breaks Blonsky out of his cell. A relieved Blonsky says Wong “took his time” and asks if the delay was down to Wong making yet another cameo in a different MCU project. It’s another delightful, self-aware reference among many others in this show.

Anyway, Blonsky leaves his cell through the portal and joins Wong in Kamar-Taj, but not before he makes a call back to Doctor Strange by asking if there’s Wi-Fi on campus. Oh, Blonsky, never change.

She-Hulk ending explained: will there be a season 2?

During her interactions with K.E.V.I.N, Jennifer Walters makes a passing reference to a second season of her show, as well as other potential MCU projects, such as the long overdue arrival of the X-Men.

However, Marvel hasn’t announced whether it’s developing She-Hulk season 2. Some MCU insiders claim to have heard murmurings that a second season could be greenlit. Meanwhile, director Kat Coiro told The Wrap (opens in new tab) that she’d “let Kevin Feige answer that” when asked if She-Hulk season 2 would be a thing.

She-Hulk ending explained: when will we see Jennifer Walters again?

Marvel keeps a tight lid on these things nowadays so, until it confirms where a character will appear next, we can’t say for sure. But that doesn’t stop us from speculating on where She-Hulk could appear next. And there are a few Phase 5 and Phase 6 productions that seem more likely than others.

The first is Captain America: New World Order. Tim Blake Nelson’s The Leader, who was last seen in 2008’s The Incredible Hulk, is set to be the main antagonist in Sam Wilson’s first MCU film as the new Cap. We expected The Leader to be the, well, leader of Intelligencia, who were the bad guys in She-Hulk’s TV show. That didn’t turn out to be the case. However, given The Leader’s obvious ties to Hulk – he’s a Hulk villain the comics – it isn’t a stretch to suggest that Hulk, She-Hulk, and Skaar could all cameo in Captain America 4.

If She-Hulk doesn’t feature in Cap 4, what about Daredevil: Born Again? Charlie Cox’s Matt Murdock is getting his own MCU TV series in 2024, with filming set to begin in early 2023. With Murdock and Walters getting along very well in She-Hulk’s TV series, we’d be amazed if she didn’t return the favor and cameo in Daredevil’s standalone show.

How about Deadpool 3, too? Like She-Hulk, The Merc with a Mouth has a penchant for breaking the fourth wall, so it would be fun to see the pair interact on the screen and with the audience in Deadpool’s third live-action film. File this one under “unlikely”, though. Deadpool 3 will see the return of Hugh Jackman as Wolverine, plus it’s supposedly positioned as a multiverse-traversing flick. There’s already too much going on in that film, then, to justify a She-Hulk cameo.

Lastly, we’d be extremely surprised if She-Hulk doesn’t team up with Earth’s Mightiest Heroes and feature prominently in Avengers 5 and 6. The multiverse will need all the help it can get to defeat Kang the Conqueror, so She-Hulk is sure to be part of the new Avengers line-up.

Man Dragged for Leaving Family With $100 for Christmas...

Scenes of a Winter Wonderland Photos

Nvidia reigns supreme in discrete GPUs – but is...

Mississippi State vs. Illinois best bet, odds and how...

Anne Hathaway reflects on the ‘hate’ she endured after...

Euphoria renewed for season 3 by HBO after doubling...

Elden Ring’s map has been secretly changing without anyone...

From Washington: The Search For A New Supreme Court...

Robb Armstrong and Sparky: How the ‘JumpStart’ Creator Met...

Twitter suspends journalists who cover the social network and...

Chelsea’s Harder out for ‘significant period’

Afghanistan’s Karzai calls on Biden to reverse decision to...

Paying down debt vs. investing: How to decide

Watch Andy Murray in the Surbiton Trophy live on...

Nearly half of employees admit to risky online behavior...

The Morning After: Amazon buys the company behind Roomba...