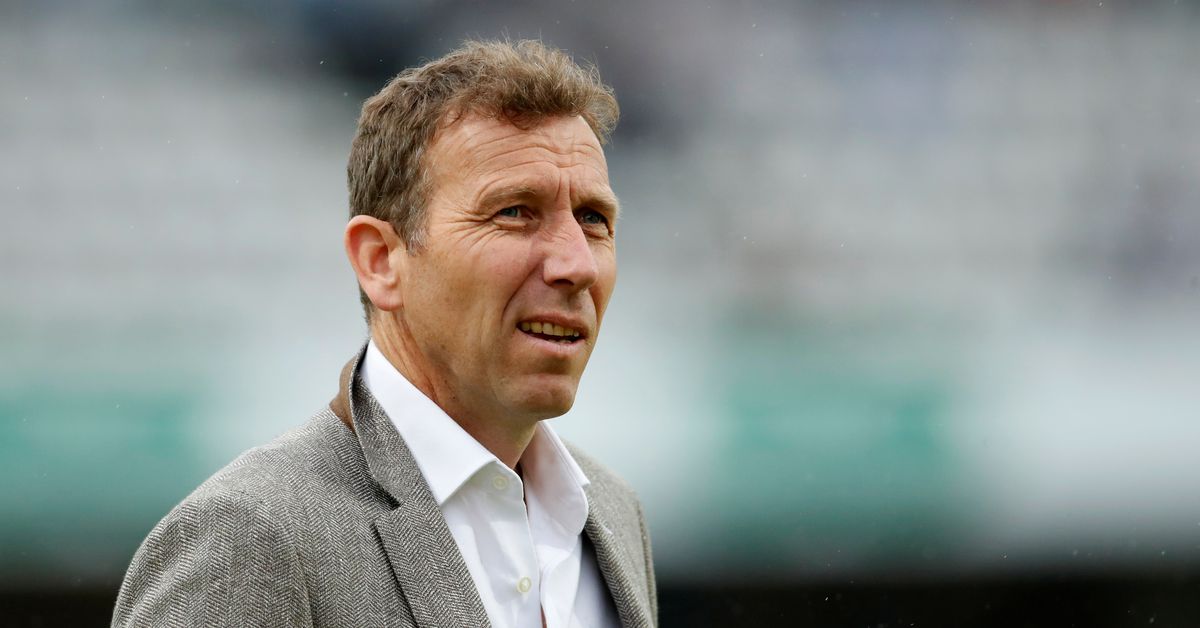 England on Sunday named their best available squad, with all-rounders Ben Stokes and Sam Curran missing out, although paceman Stuart Broad was included despite a calf injury. read more

Stokes was unavailable as he continues his indefinite break from cricket to focus on his mental health, while also recovering from a second operation on a broken finger. Curran was left out due to a stress fracture in his lower back.

Fast bowler Jofra Archer was unavailable after he suffered a recurrence of a stress fracture in his elbow.

“It’s not the strongest squad England have taken to Australia – nor is it the weakest,” Atherton wrote in his column for The Times. “Australia might be so described as well, strong as they are in bowling but less so in batting.

“Any doubts over England’s prospects are tempered to some extent by doubts in Australia’s camp, where much rests on the form of Steve Smith and Marnus Labuschagne, and the fitness of the main three fast bowlers: Josh Hazlewood, Pat Cummins and Mitchell Starc.”

The opening match of the series begins in Brisbane on Dec. 8, with Australia playing their first test since losing to India in January.

“Quite what degree of readiness Australia’s players will be in is anyone’s guess, because they have played no test cricket since being beaten at home by a second-string India team nine months ago,” Atherton said.

“There have been rumblings about the coach, Justin Langer, since then and David Warner’s place will come under scrutiny if he starts badly. Beyond the main bowlers, the threat recedes.”

Reporting by Shrivathsa Sridhar in Bengaluru; editing by Richard Pullin Covid in Wales: Fans to return to stadiums as rules ease

Charlie Bit Me NFT sale: Brothers to pay for...

The viral brothers talk to Newsbeat after an NFT of their viral video from 2007 sells for £538,000.
Read more

Archaeologists uncover three wooden railways, each one laid immediately on top of the last, on the Tranent Waggonway.
Read more

Arsene Wenger says he is prepared to take a "gamble" with his proposals for a new international match calendar.
Read more

You may have your heart set on the Sony WF-1000XM4, but you should consider their predecessors instead.
Read more

COP26: Greta Thunberg has no plans to attend Glasgow...

The climate campaigner is concerned about the impact of Covid on attendance at the Glasgow summit.
Read more

Coroner confirms identify of man eaten by alligator amid...

The St. Tammany Parish's coroner has confirmed the remains of the man who was eaten by an alligator in the floodwaters after Hurricane Ida. Dr. Charles Preston was able to confirm the man who was...
Read more

Take a look at what’s happening tomorrow morning on...

Vladimir Duthiers talks to CBS This Morning senior producer Diana Miller about highlights of what will be on the show for Friday, January 30, 2015.
Read more

Sen. Bernie Sanders (I-Vt.) on Sunday said the drone strike in Afghanistan that resulted in the deaths of 10  civilians was "unacceptable.""I certainly hope they understand what happened and make sure that never ha...
Read more

Realme Pad release date, price and what you need...

The England manager says vaccination is a chance for them to "get your freedom back".
Read more

Gov. Christie is facing strong criticism as recreation areas, including beaches and parks, remain closed for a third day in New Jersey. The continued closures may place up to 35,000 state workers on furlough. Christie says he would only consider a budget that…
Read more

Our country has been humiliated as never before, with our military humbled by an illiterate and rag-tag army of Taliban fanatics.
Read more

An NBC News analysis of Centers for Disease Control and Prevention data shows that the number of people receiving booster shots is outpacing those getting their first or second doses and is contributing to a modest increase in Covid vaccinations in October.
Read more

The 31-year-old man was shot in the Baillieston area of Glasgow in the early hours of Saturday.
Read more

Joe Biden is scheduled to meet with European Union leaders in Brussels on Tuesday as his first presidential overseas trip continues.
Read more

In India, father of one Harishchandra Barik is having to make hard choices for his family when it comes to food. There is less meat, fish or fruit these days on the table, more eggs instead. Chickpeas and paneer, a type of local cottage cheese, have got out o…
Read more

Last week, we introduced you to the Class of 1971 — the cast members who are celebrating 50 years of service alongside the 50th anniversary of Walt Disney World Resort. Today we’d like to introduce you to one of those inspiring cast members: Forrest.  Forrest…
Read more

Perched on a corner of the stage at La Septente, an open-air club in Democratic Republic of Congo's capital Kinshasa, Manda Chante sings the lilting opening to "Independence Cha Cha", an old anthem for African anti-colonial movements.
Read more

If you've been struggling to buy a new PlayStation or Xbox, this might be the reason why.
Read more

The XGIMI Horizon Pro is an exemplary 4K projector, with an incredibly sleek design and capable long-throw projection. But there are some caveats.
Read more

Sevilla reject Chelsea's "unsatisfactory" offer for France defender Jules Kounde, insisting he will not be allowed to leave for less than 80million euros.
Read more

BBC to publish report on Bashir rehiring next week

The director general says there is "no doubt" rehiring journalist Martin Bashir was a "big mistake".
Read more

PG&E says equipment may be tied to fire, touts...

The Model 3 remains the yardstick by which other entry-level luxury EV are measured.
Read more

Scientists involved in a government-run panel of experts studying COVID-19 in India said they were ignored when they warned the government to impose COVID-19 restrictions in response to new variants of the virus thought t...
Read more

The remarks by the Delaware Democrat signal the panel is poised to make social media accountability a top priority in its oversight efforts under Democratic control.
Read more

George Clooney, Kerry Washington, Don Cheadle, Mindy Kaling and other stars are coming together to help launch a public film school in Los Angeles in an effort to increase diversity in Hollywood. CBS Los Angeles' Hermela Aregawi has the details.
Read more

Former President Donald Trump resumes his signature rallies this weekend, part of a summer revenge tour against Republicans who crossed him and an opportunity to raise money for his various political and legal activities.
Read more

The new £6.7bn bid for the supermarket from Fortress comes amid rumours of a rival offer from another US firm.
Read more

The defection of three moderate House Democrats on drug pricing legislation highlights the steep challenge the party faces in pushing their $3.5 trillion package through Congress.With thin margins in both the House...
Read more

11 hours of questioning for Cuomo in harassment inquiry

Investigators conducting an inquiry into sexual harassment allegations against New York Gov. Andrew Cuomo questioned him for eleven hours when he met with them last month, according to The New York Times
Read more

The Dutch rowing team has agreed to separate itself from other competitors after one of its athletes, a coach and a staff member all tested positive for COVID-19, the team's performance director told Reuters on Monday.
Read more

This is Your Best Chance to Get a Crazy...

You may not be ready to travel yet. But you may want to start booking.
Read more

Pfizer said it has delivered more than 170 million doses in the U.S.
Read more

Auger-Aliassime vs Medvedev live stream: how to watch US...

Can the Russian end his Flushing Meadows semi-final jinx? Here's how to watch US Open tennis online and get a Felix Auger-Aliassime vs Daniil Medvedev live stream today.
Read more

Police say they exchanged gunfire with a suspect during a shooting at a shopping mall in Boise, Idaho, that killed two people and injured four -- including an officer
Read more

From Angkor Wat to Havana, the travel destinations reopening...

Key GOP lawmaker backs Powell for another term as...

The top Republican on the House Financial Services Committee on Wednesday called on President Biden to renominate Jerome Powell as chair of the Federal Reserve board.In opening remarks during a W...
Read more

Bath prop Beno Obano is facing a long spell out after rupturing his anterior cruciate ligament in their defeat by Harlequins.
Read more

Jemaine Clement and Taika Waititi are working on new...

Clement tells EW the What We Do in the Shadows masterminds are writing an action-adventure comedy next.
Read more

A referendum breathes down council’s neck

Happy Monday, Illinois. Happy Hanukkah and chag sameach to all our Playbookers celebrating the Festival of Lights! TOP TALKER Meetings between Chicagos Black and...
Read more

Biden: Omicron ‘a cause for concern, not a cause...

The president plans to take action against omicron "not with shutdowns or lockdowns, but with more widespread vaccinations, boosters, testing and more."
Read more

The former husband of Lori Vallow, the “doomsday cult mom” charged in the death of her two children and her spouse, was shot in the chest and abdomen and sustained multiple bruises before he died, according to an autopsy report released Thursday.
Read more

"I have zero desire to be involved in politics," the 28-year-old racer previously said. "You want to appeal to everybody."
Read more

Bold, sensual and talented, Oscar- and Golden Globe-nominee Sharon Stone was one of the most talked-about actresses of the '90s, making a powerful impression in such films as "Total Recall," "Basic Instinct" and "Casino." But a brain hemorrhage in 2001 nearly…
Read more

From ‘brink of disaster’ to ‘mesmerising contenders’ – Germany...

Germany were written off after defeat by France in the opening game, but now must be considered one of the favourites to win Euro 2020.
Read more

While people are now able to travel freely in Australia’s more populated east, COVID-19-free Western Australia will maintain its tight restrictions into next year
Read more

White House Press Secretary Sean Spicer said President Trump will sign an executive order Wednesday paving the way for the construction of a wall between the United States and Mexico. Spicer reiterated that "one way or another" Mexico will pay for the wall. W…
Read more

Bitcoin rallied following a proposal from global regulators that would introduce capital requirements for banks dealing in crypto.
Read more

This week's Bop Shop features a new stunner from Adele, a cinematic collab between Rosalía and The Weeknd, a trans anthem from Cazwell, and more.
Read more

Lobbying: Call for greater transparency around access to ministers

The rules for ministers taking up business roles after leaving office must be improved, Lord Evans says.
Read more

Lewandowski says Trump has not spoken to him about...

Former President Trump's one-time campaign manager Corey Lewandowski said Sunday that Trump has not spoken to him about being reinstated, following reports the former president believes he will return to the White H...
Read more

The body of Stephen Quigley, 26, was discovered in the grounds of the Royal Alexandra Hospital in Paisley.
Read more

A powerful gas explosion in a sewage system in Pakistan’s largest city, Karachi, killed at least 12 people and injured 11 others Saturday, police and a health
Read more