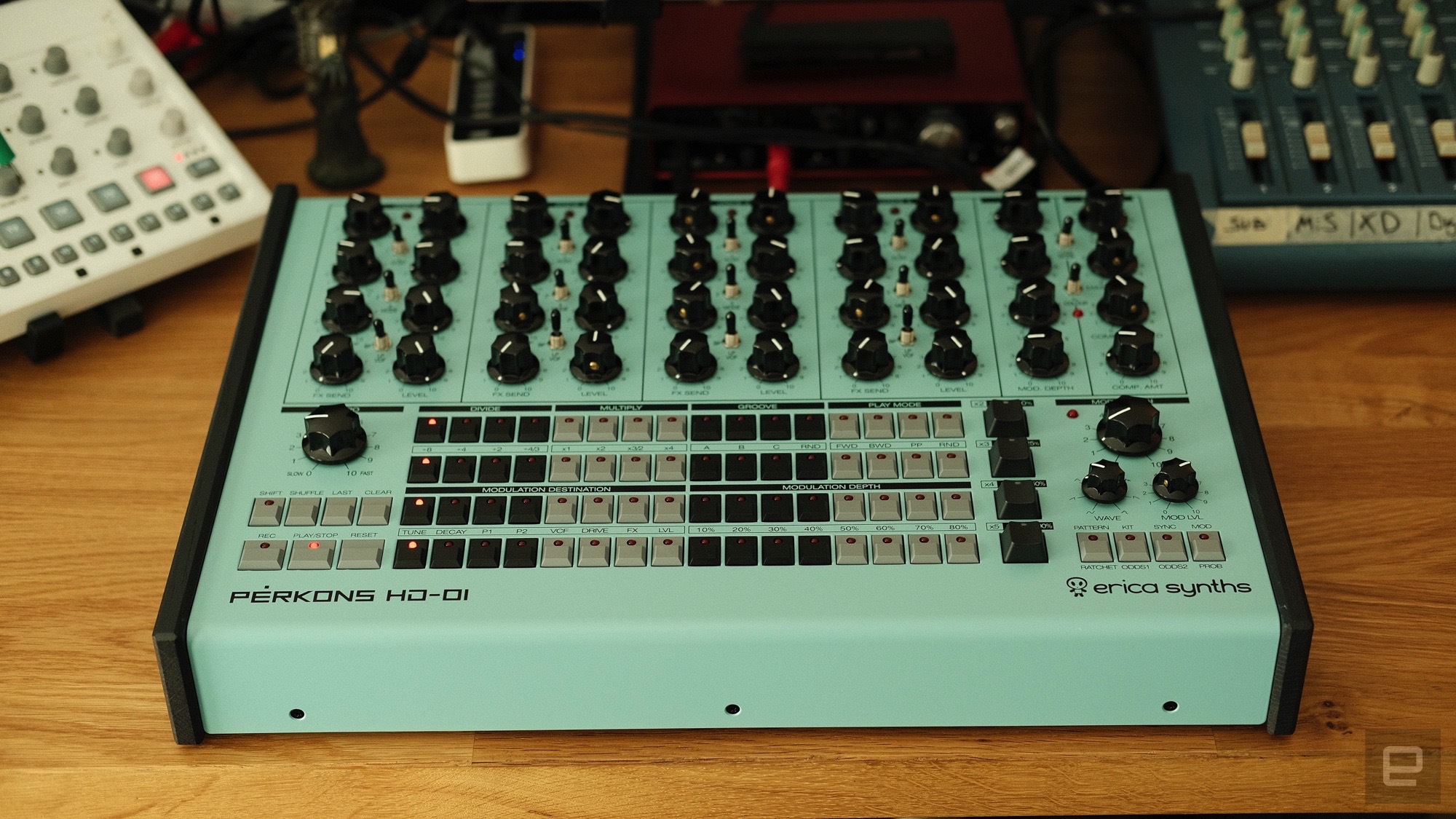 In fact, after years of mostly making more laidback and ambient styles of electronic music, I found myself dialing in harsh, blown-out guitar tones, a la Nine Inch NailsBroken to jam along with Prkons. I was transported back to my high school days of black t-shirts and long greasy hair. And I wasnt mad about it.

The one tip I have is, keep that drive knob pinned and be generous with the compressor. I think part of why I was a bit lukewarm on it at first was because I was trying to be subtle and judicious with dialing in those effects. Which, frankly, it was probably pretty stupid of me to expect subtlety from a drum machine named after the Baltic god of thunder.

Once you accept the sound palette at your disposal, you have to come to grips with the technical functions of Prkons. This is where things can get a little messy. While programming in a basic 16-step drum pattern and playing it back is relatively simple, some of the more advanced functions arent always that intuitive. At least at first, Id highly recommend keeping the manual handy. Even if just to reference what the parameter knobs are controlling for each voice mode.

The Prkons is decidedly old school in its approach to interface design. Theres no screen or menus to dive through. Instead, almost all of the machine’s functions from the sequencer playback mode, to the shuffle percentage to the LFO target, are controlled via the 64 step buttons or four trigger buttons. This means that basically anything beyond simply inputting individual drum hits requires pressing some combination of two or three buttons simultaneously.

For example, if you want to set the probability that a particular step will play you have to hold down the step you want to change, the probability key and one of the four trigger buttons to select a percentage (10, 25, 50 or 90 percent). The benefit is that, since you dont have to do any menu diving, its simple to manipulate a pattern while its playing. And once you figure out the basics of how the interface works, its pretty easy to grasp since everything is labeled. The downside is that some things have relatively limited options, like probability. If you want to have a step to have a 33 or 75 percent chance of playing, youre out of luck. Similarly, shuffle is in predetermined percentages, though those arent labeled.

You also have to be careful to hit the buttons you want in the right order. If you press the pattern / ratchet button before you start holding down a particular step, then youre not going to add a ratchet, you’re going to change patterns. And if you havent saved the one you were currently working on, it will be gone for good. Prkons can be fun, but it can also be very unforgiving.

Even though the interface is old school, Prkons does have a number of new-school features to help keep it from being too robotic. In addition to shuffle and probability, you can change the length, add accents, multiply or divide the tempo, select one of four grooves and choose one of four different playback modes: forward, backward, ping-pong or random. And each of these can be done on a per-track basis. So you can make track four only 13 steps long and ping-pong from beginning to end and back at half speed, while track one plays at double speed with a 50-percent shuffle and track two has a unique groove but is only eight steps long. Watch: Our correspondent on the front line, with Ukraine’s...

Google Photos takes another step towards solving its screenshots...

James Webb telescope takes ‘deepest ever’ view of the...

Sweden to Give Utilities $23 Billion in Credit Guarantees

He Was Given Six Months to Live. Then He...

A billionaire investor and a famous rapper agree capitalism...

CDC recommits to isolation and quarantine guidelines without tests

Iraqi PM to head to Saudi Arabia, Iran for...

Pope Francis apologizes for abuse of Indigenous children in Canadian...

Covariant, MassRobotics and The Engine discuss the road from...

Kansas Republicans punish legislators for voting with Democrats on...

Kashkari Says Fed Will Do What Is Needed to...

Figure skating-Japan’s Hanyu out to ‘complete’ himself with quad...

Space, the unseen frontier in the war in Ukraine

Recovering from Hurricane Ian could take years in Florida,...

Five years on, U.S. recognizes Rohingya as victims of...

The Razer Kishi V2 looks like an ideal Xbox...

NFT Thefts on Instagram Are on the Rise, Including...