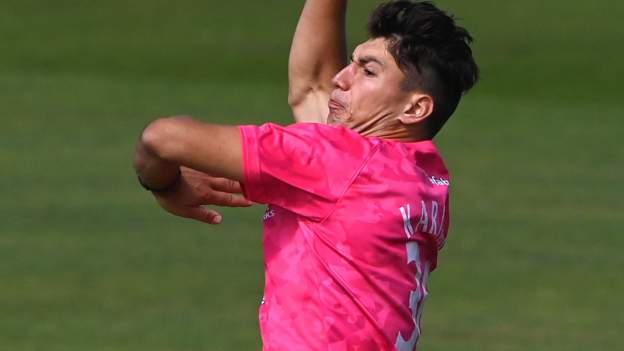 The 28-year-old South Africa-born player joined Sussex on a short-term deal in August and helped the county reach the One-Day Cup semi-finals.

He was the club’s top wicket-taker in the competition, claiming 20 wickets at an economy rate of 5.40 and best figures of 4-21 against Leicestershire.

He has previously played first-class cricket in South Africa for Gauteng and was part of the Greek side that finished bottom of their pool in the first round of European qualifying for the 2024 T20 World Cup earlier this summer.

Sussex have not disclosed the length of his contract.

“I’m really looking forward to continuing my journey with Sussex and am excited to see what the future holds,” said Karvelas. Jill Biden tests negative for Covid-19 and will return...

2 soldiers killed in fighting with militants in SW...

Google’s AI chatbot—sentient and similar to ‘a kid that...

Analysis: Japan widens FX watch to include risk of...

Pipers and silence to mark Scotland’s moment of reflection

NFT Thefts on Instagram Are on the Rise, Including...

Brazil military finds no fraud in election, but refuses...

Uttar Pradesh: The right-wing brigade in pursuit of a...

Huawei: 5G is rapidly gathering steam, but we need...

Windows 11’s new feature is good news for your...

Japan’s Eneos restarts CDUs in Sendai and Chiba after...

Mysterious “accident” at an Iranian weapons facility kills an...

Sony sends people on a code hunt for a...

Chrome for Android now lets you lock your incognito...

The death of Trayvon Martin, and the birth of...

The Amazon sales could be a great chance to upgrade your PC...