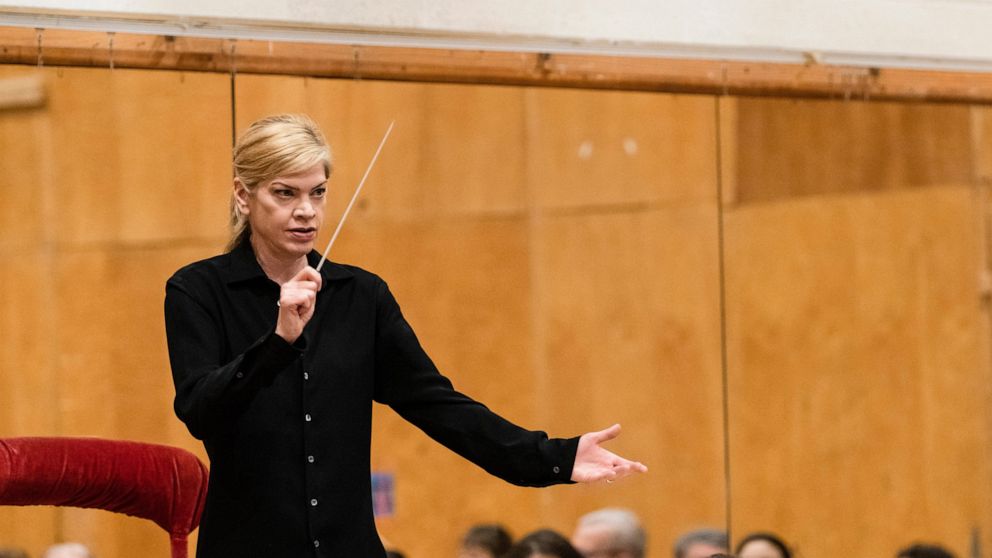 NEW YORK — Its been quite a year for conductor Keri-Lynn Wilson, forming an orchestra from scratch, leading it on a 12-city tour, and then as soon as it disbanded going straight to the Metropolitan Opera to prepare for an opening-week debut.

Hers were the guiding hands that molded the Ukrainian Freedom Orchestra, an ensemble founded as a musical statement of defiance against Vladimir Putins invasion of Ukraine.

Wilson, who traces her own Ukrainian ancestry to great-grandparents on her mothers side, recalled being in Europe when the assault began in February.

Three weeks later, I was supposed to go to Odessa to conduct, and instead I met Peter in London, she said. And I was just constantly crying and saying we have to do something, and thats when the tour was born.

Peter is Peter Gelb, Wilsons husband and the Mets general manager. He contacted the head of the Polish National Opera, and together they arranged funding and tour dates for the new orchestra.

Quickly, Wilson assembled a group of 75 Ukrainian musicians, some of them recent refugees, some members of European orchestras, and others still living in their embattled country.

It was a select group, but really quite raw, she said. And a lot of them hadnt been playing for months. They were maybe relocating, desperately trying to find homes, jobs in other countries. And coming out of COVID.

With only 10 days to rehearse together in Warsaw before launching the tour, Wilson recalled, The first day was quite rough, and we just played Dvoáks ‘New World Symphony.’ The second day, after seven hours I was astonished. And by the fourth day, the Dvoák just rocked.

The tour hit 10 European cities plus New York and Washington, gathering glowing reviews with programs that included, in addition to the Dvoák, a symphony by Ukrainian composer Valentin Silvestrov, works by Brahms and Chopin, and two operatic arias sung by Ukrainian soprano Liudmyla Monastyrska.

Because of the orchestras unique political mission, no Russian music was included in those concerts. But Wilson strongly opposes any suggestion that Russian composers are somehow tainted by Putins aggression.

There has never been any doubt in my mind that we cant hold literature or Russian culture hostage, she said.

Where she draws the line, however, is working with artists who support the current regime. Thus, when she was engaged to conduct a run of Puccinis Tosca later this fall in Buenos Aires, she noted that Russian soprano Anna Netrebko who has been barred from the Met and other houses for refusing to distance herself from Putin was listed to sing two of the performances.

I said, Im sorry, I cant perform with Ms. Netrebko, and they said, Dont worry, shes bringing her own conductor. So it was fine. Fortunately, I have all the rehearsals. Shes just stepping in in the middle.

The opera that has brought her to the Met for the first time is a 20th century Russian masterpiece, Dmitri Shostakovichs Lady Macbeth of Mtsensk. In it, the 26-year-old composer set a sordid tale of rape, murder and betrayal to a raucous, dissonant score that puts extreme demands on players and singers alike.

For me, its a perfect piece to make my debut, said Wilson, who had previously conducted the opera in Tel Aviv and Zurich. Ive had a love affair with Russia since I was a child… and this opera is just a tour de force for a conductor. Its a piece where I can really show my stuff.

Wilson praised the Met orchestra as a phenomenal vehicle to work with, and the chorus as fabulous, but said that in the first rehearsals she had to remind them that in this piece you cant have any inhibitions.

It was interesting to see how safe some of the playing was, she said. Some players go for it and some I really had to say, No that fortissimo isnt enough. Things were too beautiful. Some of the chorus was too beautiful.

Although the Met scheduled this revival and hired her three years before the invasion, Wilson said the timing couldnt have been better.

This is the opera that was banned by Stalin, she said. Just as Putin is trying to silence Russians who are retaliating or who are doing anything out of the box artistically, this is shouting out right in his face. Its extraordinary, the symbolism.

Wilson, who grew up in Winnipeg, Canada, went to The Juilliard School in New York to study flute, but said she soon became totally, annoyingly bored” with the instrument. I enjoyed playing in the orchestra, she said, but it came to the point where I had to conduct to make music the way I wanted to.

Her career flourished and she worked at many of the worlds leading opera houses and concert halls, but never at the Met. Finally, in 2019, the Mets music director, fellow Canadian Yannick Nezet-Seguin, invited her to make her debut this season.

I thought that after conducting in London, Paris, in Russia and elsewhere in the U.S., that she should come to our house, which is the best opera house in the world, Nezet-Seguin said.

Judging from the critical response, Wilsons first appearance is unlikely to be her last.

There were some grumbles when the season was announced about a plum gig going to the boss wife, wrote Zachary Woolfe in The New York Times, reviewing the first performance on Sept. 29. But the quality of her work spoke for itself This was a very fine performance.

Lady Macbeth of Mtsensk continues at the Met through Oct. 21 with a cast that includes Russian soprano Svetlana Sozdateleva as the title character, tenor Brandon Jovanovich as her lover, and bass-baritone John Relyea as her brutish father-in-law.

For Wilson, jumping right into rehearsals at the Met after the Ukrainian Freedom Orchestras final concert eased the pain of separation.

Oh, it was awful, she recalled of watching the musicians disperse, many for an uncertain future. Thank God I had this job to come to.

The one solace was being able to assure the players that the orchestra will reunite next summer for another series of concerts.

Hopefully it will be a victory tour, she said. That would be awesome. GOP backing an aggressive policy toward Ukraine, breaking with...

UN calls for evacuation of children trapped in besieged...

Apple slapped with a $19 million fine in Brazil...

Tennessee man sentenced to life in prison for double...

Indonesia blocks Steam, PayPal and other services over missed...

Highlights: England comfortably beat France to all but secure...

There’s been a huge rise in open-source cyberattacks

President Biden looks to rally the party on voting...

A Tour of Arrival’s Microfactory

‘I aspire for Labour to be in first place’...

Saudi king admitted to hospital in Jeddah for tests...

Murder arrest after woman dies in fall from flats

Democrats see inflation as growing problem for their agenda

Apple’s second-gen AirPods are on sale for $100

Texas regulators have their eyes on one of the...

Logan Mwangi: Boy, five, could have survived for hours

Halo Infinite Season 2 will begin in May, bringing...

Why congressional Democrats should rethink their universal pre-k plan

California drought is pushing Latino farmers and workers to...

U.S. sends carrier toward Korean Peninsula as militaries step up response to...
Stadia launch title 'Gylt' is heading to other platforms next year