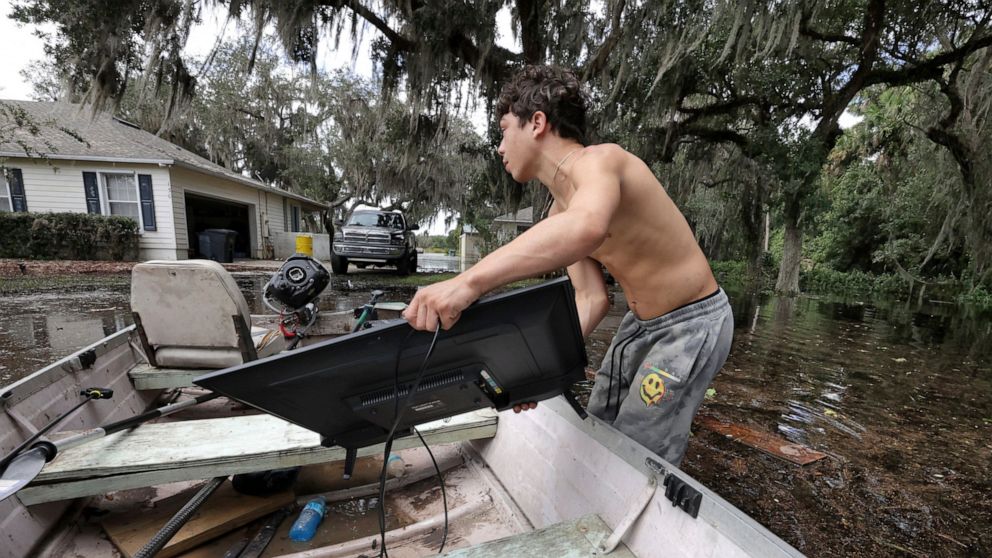 ST. JAMES CITY, Fla. — Following Hurricane Ians destruction, many residents on one Florida island have stayed put for days without electricity and other resources while hoping the lone bridge to the mainland is repaired.

Pine Island, the largest barrier island off Floridas Gulf Coast, has been largely cut off from the outside world after Ian heavily damaged its causeway and rendered its towns reachable only by boat or aircraft.

We feel as a community that if we leave the island abandon it nobody is going to take care of that problem of fixing our road in and out, Pine Island resident Leslie Arias said as small motor boats delivered water and other necessities.

A week after the Category 4 storm hit southwest Florida, the full breadth of its destruction is still coming into focus. Utility workers continued Wednesday to push ahead to restore power and crews searched for anyone still trapped inside flooded or damaged homes, while the number of storm-related deaths has risen to at least 84 in recent days.

At least 75 people were killed in Florida, five in North Carolina, three in Cuba and one in Virginia since Ian made landfall on the Caribbean island Sept. 27, a day before it reached Floridas Gulf Coast. After churning northeastward into the Atlantic, the hurricane made another landfall in South Carolina before pushing into the mid-Atlantic states.

There have been deaths in vehicle wrecks, drownings and accidents. A man drowned after becoming trapped under a vehicle. Another got trapped trying to climb through a window. And a woman died when a gust of wind knocked her off her porch while she was smoking a cigarette as the storm approached, authorities said.

In hardest-hit Lee County, Florida, all 45 people killed by the hurricane were over age 50.

President Joe Biden was scheduled Wednesday to visit Fort Myers Fishermans Wharf in an area that was especially devastated by winds and surging tides.

Boats, including huge yachts, were thrown asunder, laying capsized inland far from their usual moorings. Homes and businesses lay in ruins with shattered windows, while the the surrounding landscape is a wasteland of debris and muck.

The wharf lies on one side of the bridge that leads into Fort Myers Beach, which was brutalized by the storm.

The Biden administration said the president has made additional federal disaster assistance available to Florida, including for debris removal and emergency protective measures.

Power restoration has become job one, but vehicle access from barrier islands to the mainland is also a priority. Florida Gov. Ron DeSantis said a temporary bridge to Pine Island should be finished by the end of the week.

Officials are also planning a similar temporary bridge for nearby Sanibel Island, but it will take a little more time.

They were talking about running ferries and stuff, DeSantis said. And honestly, you may be able to do that, but I think this is an easier thing, and I think people need their vehicles anyways.”

In the meantime, small motorboats continued to provision Pine Island. Jay Pick, who has been on the island since May to help his in-laws, said the winds from Ian blew the house’s roof off.

We’re all safe, though, Pick said Tuesday afternoon. We’re blessed. Driving around seeing what some people have compared to what we have left, you get that survivor-guilt thing. I’m trying not to. I’m trying to be happy for what we do have left.

Arias, who also chose to stay on the island, said Tuesday that many who stayed are supporting each other.

We have now gathered a lot of resources, not only donations but volunteers as well, Arias said. It’s a wonderful thing to see how the community has come together. In every end of the island … there is a family member or a neighbor helping that other neighbor.

For more coverage of Hurricane Ian, go to: https://apnews.com/hub/hurricanes The rise of API-first companies, in fintech and beyond...

Man Backed for Revealing to Family That ‘Sister’ is...

Biden Looks to Raise Pressure on Putin With Xi...

Meghan Says Harry Is a ‘Feminist’ Who Had ‘Guttural’...

Black conservatives who think for themselves pose ‘greatest threat’...

WhatsApp will end support for iOS 10 and iOS...

Millions of WordPress Sites Got a Forced Update for...

Biden Says Any Saudi Visit Would Focus on More...

Capturing the heritage of the International Space Station before...

Intellidash Pro is an easy way to get CarPlay...

This portable Bluetooth speaker is powered by light

Mike Pence to campaign for Gov. Brian Kemp ahead...

Chinese officials apologize for breaking into homes of people...

Michigan man who wanted to admit to killing gets...

‘We hope that he chooses the right side of...

Fidelity says it will offer crypto in retirement accounts...

Umbrella insurance could be crucial in an emergency

Bill Maher defends Whoopi Goldberg, says she ‘should not...

That isn’t me, Kwarteng tells Mirror over wrong image

U.S. sends carrier toward Korean Peninsula as militaries step up response to...