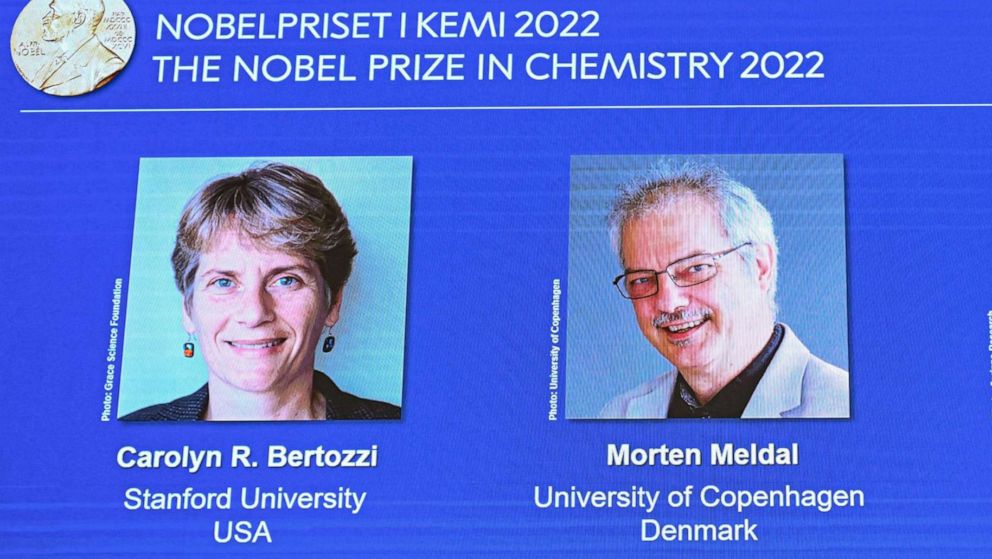 Three scientists won the Nobel Prize in Chemistry Wednesday for their work in making molecules “click.”

Sharpless and Medal — independent of each other — “laid the foundations of click chemistry,” a field in which molecular building blocks are snapped together quickly and efficiently.

Bertozzi then used this field to develop bioorthogonal chemistry, in which scientists modify molecules in cells of living organisms without disrupting the normal chemistry of the cell.

This years Prize in Chemistry deals with not overcomplicating matters, instead working with what is easy and simple. Functional molecules can be built even by taking a straightforward route, Johan Åqvist, chair of the Nobel Committee for Chemistry, said in a statement.

Sharpless previously won the Nobel Prize in Chemistry in 2001, making him only the fifth person to win two Nobel prizes and the second person ever to win the award twice, according to the committee. His first award was for developing three types of chemical reactions.

Each Nobel prize is worth 10 million kronor — the equivalent of about $900,000 — and is given to laureates with a diploma and a gold medal on Dec. 10, the date the creator of the Nobel prizes, Alfred Nobel, died in 1896. Here’s why CNET co-founder Halsey Minor is bullish on...

Is the UK getting hotter, and what causes heatwaves?

Amazon lines up dozens of launches to put thousands...

Ukraine braces for major Russian assault in the East

Nurse diversity linked to a reduced risk of maternal...

Terrence Higgins: A name that gave hope to those...

The Fallout of the FTX Collapse

US military drops appeal of Hawaii order to drain...

BMW will distract you with casual games while you...

The Hundred: BBC Sport goes behind the scenes with...

Skye to isles ferry hit by second fault in...

Nancy Pelosi blasted for quoting Gospel in support of...

US woman on vacation in Malta denied lifesaving abortion

Biden to speak with Ukrainian President Zelensky amid rising...

A rising Democratic star told his origin story. But...