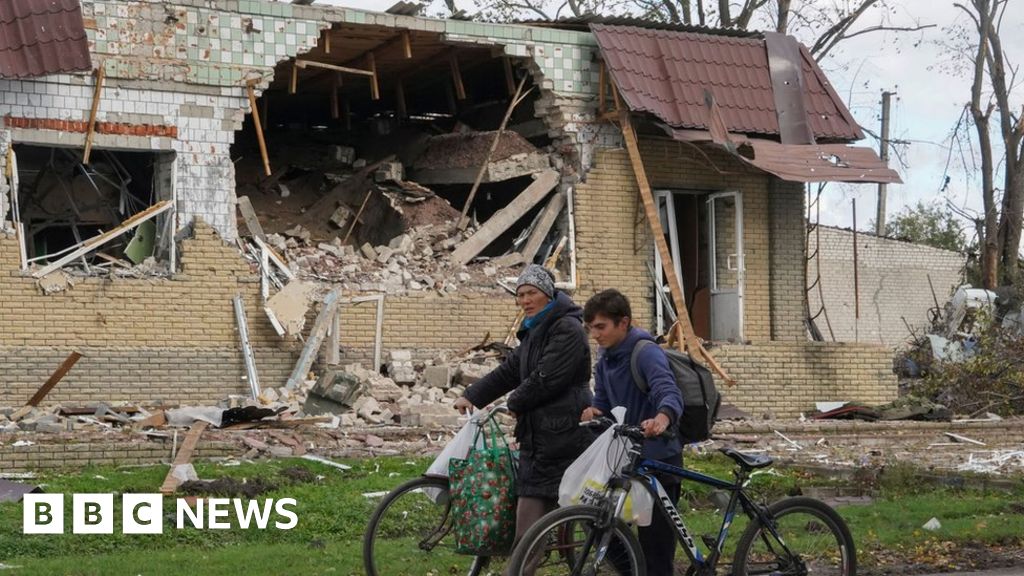 Media caption, Liz Truss on Ukraine: “We did not stand up to Russia early enough.”

The West was “complacent” and “did not stand up to Russia early enough”, the PM has said in her conference speech.

She expressed confidence Ukraine would be victorious in the war telling party members: “Ukraine can win, Ukraine must win, and Ukraine will win.”

This was met with applause and a standing ovation from the audience.

It comes as Ukraine says its forces have advanced four regions: Kherson, Kharkiv, Luhansk and Donetsk

Russia has insisted it will recapture areas of annexed territory that fell to the Ukrainian advance.

Speaking in Birmingham, Ms Truss used a section of her conference address to praise the Ukrainians fighting against Russia, describing them as “brave people” who “aren’t just fighting for their security but for all our security”.

“This is a fight for freedom and democracy around the world,” she said adding: “We will stand with our Ukrainian friends however long it takes.”

The prime minister also criticised the western countries whose failure to challenge Russia sooner, she said, had led to the current “global crisis”.

“We became complacent, we did not spend enough on defence, we became too dependent on authoritarian regimes for cheap goods and energy.

“And we did not stand up to Russia early enough – we will make sure this never happens again.”

She told her party conference she was taking “decisive action to reinforce our energy security” by opening gas fields in the North Sea and delivering more renewables and nuclear energy.

Earlier in the week, Foreign Secretary James Cleverly also praised the Ukrainian people saying both the professional army but also volunteers including students, musicians, artists and sports stars were “taking up arms and defending their country against this illegal, unprovoked act of aggression by Vladimir Putin”.

He said Ukraine would succeed and promised that “when that fantastic, glorious day comes” the UK would help rebuild the country.

He also asked the UK government for “more hospitality, more generosity, more patience” when it came to letting Ukrainians into the country. Ukraine war: Biden warns Putin not to use tactical...

Inside the Forecast: Is Florida officially a red state?

Afcon 2021: Pierre-Emerick Aubameyang will return to Arsenal for...

California voters want Biden to step aside — and...

Don’t do what I did and leave an iPhone...

How the Supreme Court put gun control laws in...

Shares of Bed Bath & Beyond dip on restructuring,...

Apple will reportedly unveil an iPhone SE with 5G...

A motorist was killed after an Amtrak train collided...

Little Steps at Russia-Ukraine Talks But No Cease-Fire

The FTC is reportedly probing Meta’s VR business for...

Game falling into place ahead of Masters, says past...

Cost of Growing Food in US Is Set to...

Critic Notebook: At Cannes, a plea for the variety...

How Aaron Ramsey’s Rangers move soured – but can...

The former CEO of fitness bike maker Peloton will...

How to Spot Fake Reviews on Amazon

‘We know where your family live’ – Ukrainian fighters...

Liverpool: Darwin Nunez has found it 'difficult to adapt' but accepts it...