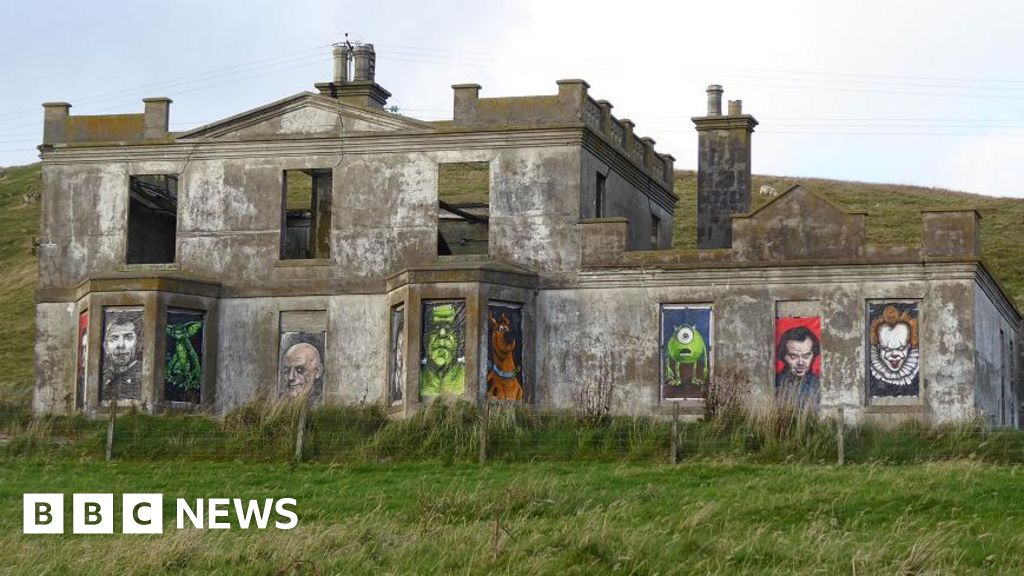 A landmark ruined property in Shetland has been transformed into a spooky Halloween attraction.

Park Hall at Bixter, 20 miles (32km) from Lerwick, was built for a doctor in the early 20th Century, and is now roofless with boarded up windows on the ground floor.

Shetland-based artist Balazs Onhausz has created a display of TV show and horror film characters to raise money for a local community’s efforts to buy a disused church.

The set of 10 paintings include Scooby Doo and characters from films including The Addams Family, Gremlins and It. Each artwork took eight hours on average to complete.

Mr Onhausz said: “I love Halloween just like a lot of other people do and wanted to do some kind of artwork to celebrate it.

“Ive kept an eye on that old, abandoned, spooky building for a long time, wanting to utilise it for an art display.”

He added: “I tried to pick characters that both kids and adults would recognise and enjoy.”

Park Hall is owned by Shetland Amenity Trust and is listed on the Buildings at Risk Register for Scotland. The European Union’s executive arm proposed a ban on...

Polestar is making a production version of its ‘Beast’...

Mercedes-Benz becomes latest Western company to pull out of...

Majority of voters say Biden is unable to handle...

Ukraine-Russia grains deal to be signed in Turkey this...

Jan. 6 is the GOP’s fault line

Syrians in desperate need of aid hit hard by...

‘Outer Wilds’ will be upgraded for PS5 and Xbox...

Entergy chairman and CEO to retire; successor as CEO...

Last Month Was the Hottest August Yet in North...

‘Sayonara Wild Hearts’ studio Simogo’s next game is an...

Elon Musk Says Twitter Deal Is ‘On Hold’ Over...

Virginia McLaurin: Woman who danced with Obamas dies at...

Apple Store employees in St. Louis file for a...

Sentence handed down for slaying of New Mexico girl

Warm spaces to help those struggling to pay heating bill