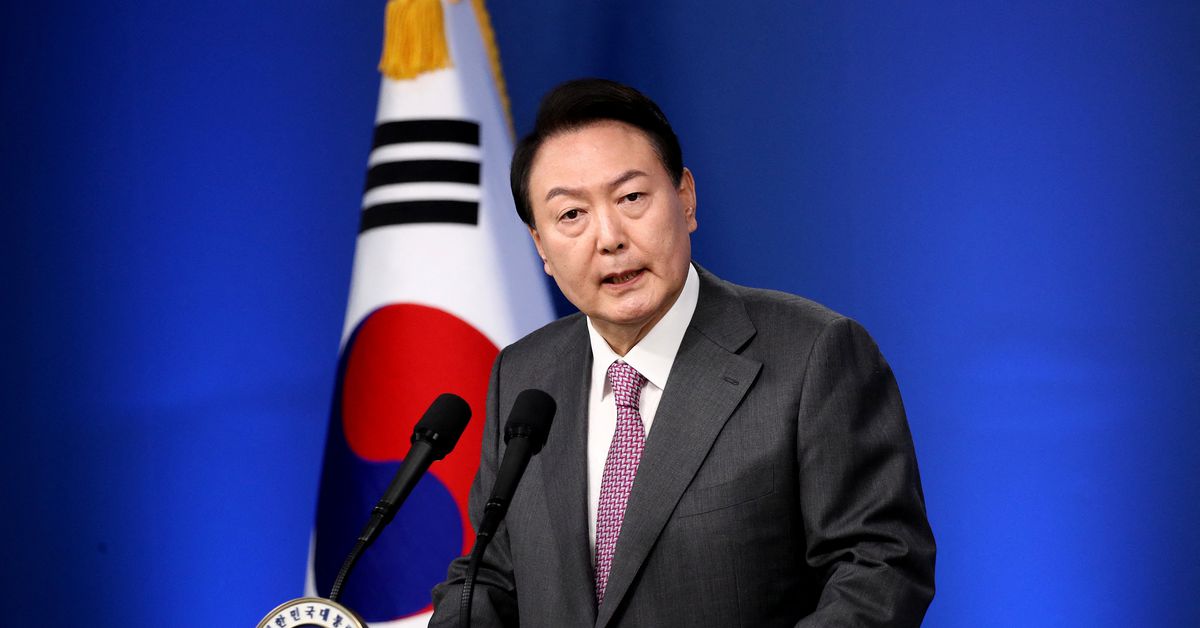 HONG KONG, Oct 3 (Reuters Breakingviews) – To many, South Korean President Yoon Suk-yeol’s first official visit to the United States last month was a diplomatic damp squib. Besides his embarrassing hot mic gaffe and other fumbles, there was much fuss about fostering closer ties when the opposite may be happening.

At first glance, the two countries look aligned: South Korea wants to reduce dependence on its top trading partner, China, and export more chips and high-tech goods to other countries; at the same time, the United States, its number two trading partner, is trying to decouple supply chains from the People’s Republic. Yet two policies in Washington expose deep rifts.

U.S. President Joe Bidens Inflation Reduction Act eliminates federal tax credits for electric cars and certain components made outside of North America, disadvantaging companies including Hyundai Motor (005380.KS). A separate CHIPS Act is promising $53 billion in subsidies for Samsung Electronics (005930.KS), SK Hynix (000660.KS) and others to manufacture in the United States and is sparking fears over South Korea’s competitiveness.

It hits a raw nerve just as demand for Korean goods is weakening with the global slowdown. Exports have underpinned the rapid development of its $1.8 trillion economy: Last years $645 billion of outbound shipments powered half of GDP growth, per The Korea International Trade Association.

Yet the country recorded a trade deficit in September for the sixth consecutive month. Semiconductors, a fifth of total exports, fell 5.7% year-on-year. The won has lost more than 20% of its value against the U.S. dollar this year. While falling oil and commodity prices should ensure an overall current account surplus this year, the longer-term risks are writ large.

A revival of American high-tech manufacturing will come at the expense of the trade-dependent Asian economy. Thanks to strong demand for South Korean-made electric cars, batteries and auto parts, shipments to the United States jumped 16% year-on-year in September. Those exports, which totaled some $96 billion last year, now look under threat. Big shifts today will have outsized effects on South Koreas trade position down the road.

South Koreas trade deficit was $3.77 billion in September, the sixth consecutive month in the red. The figure hit a record $9.47 billion the previous month.

The South Korean won has weakened more than 20% against the U.S. dollar since the start of the year, making it one of the worst-performing major currencies in Asia. Padres knock out Mets, advance to NLDS as Joe...

Photos show 2-month-old being rescued from wreckage of helicopter...

Wet Leg, Nova Twins and Kojey Radical on the...

TikTok’s affect on teens will be investigated by state...

Spurs not ready to compete at top – Conte

What the Academy’s 10-year ban means for Will Smith...

Rep. Byron Donalds: It Shouldn’t Be Taking This Long...

North Korea tensions: Why is Kim Jong-un upping the...

Special counsel to take over DOJ’s Jan. 6 and...

Homes for Ukraine: 185 sponsorships ‘broken down’ in NI

The secret stretch of coastal France that’s nicer than...

What to expect from the creator economy in 2023

Why more Americans are quitting their jobs than ever...

Mazars to Pause All Work for Crypto Clients, Binance...

As COVID-hit China reopens to the world, countries put...

Sir David Jason surprised with clip of his first...

The biggest story from Big Tech earnings is the...

INDIA STOCKS Indian shares down as metals, IT drag amid global growth...
Politics of rebuilding intensify as Florida's devastation is laid bare