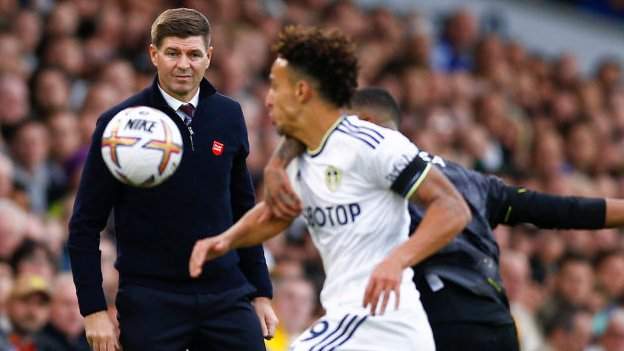 “This is the best league in the world and our fans don’t come here to watch a match at snail’s pace,” said Marsch.

But Villa boss Steven Gerrard replied: “Was he unhappy with their timewasting when they went down to 10 men?”

The ex-England midfielder added: “It works both ways.

“But I’m not interested in Jesse and what he thinks and his opinion. We will do what we need to do. I’m only interested in Aston Villa.”

Six different players received at least a caution at Elland Road – four from Leeds and two from Villa.

‘Slowed down by an opponent from the first minute’

Villa had 19 shots, seven on target, compared to six efforts from Leeds, with Patrick Bamford’s late strike – saved by visiting keeper Emiliano Martinez – their only shot on target.

However, Marsch, who watched the game from the media seats at the back of a stand as he served a one-game touchline ban following his sending-off in last month’s 5-2 loss to Brentford, felt Villa were negative from the start.

“I almost feel we have to apologise to our fans,” added the American.

“They didn’t get an entertaining match, they got a match that was slowed down by an opponent from the first minute and they [the fans] don’t get to enjoy coming to Elland Road as much as they should.

“I will be speaking to someone from the league and [have] already spoken to the referees’ committee, it’s clearly a tactic. I feel bad for our fans, they have to watch that and they don’t get an energetic game.

“I have had more referees that were able to manage it better – it leads to frustration to everyone in the crowd.”

The result left Leeds 12th in the table, one point and two places above Villa, and Gerrard said his side should have done better with the man advantage.

“One or two of our players will not sleep as well as they should do,” added the Villa manager.

“You need big players to step up and play well. We knew it would be tough and before the game a point wouldn’t have been so bad but how the game panned out, one point is not enough – we created more than enough to take the three points.

“We’ve turned a corner but I wouldn’t say we have gone from one level to another extremely higher level.

“We’re definitely better but still tons and tons to do.”

‘Not an intelligent play’

Luis Sinisterra joined Leeds in the summer in a £21m move from Feyenoord and has scored three club goals this season, as well as three goals for Colombia

For 23-year-old Sinisterra, it was a tough lesson to learn as he picked up a second yellow card for blocking Douglas Luiz’s quickly-taken free-kick after being booked in the first half for tripping John McGinn.

Marsch conceded that the red card was the right decision, but urged his team to make better on-field decisions.

“The second yellow is not an intelligent play,” said Marsch. “It gets Luis in trouble and us in trouble. We worked on man-down tactics two days ago and even showed them a video to watch last night.

“The preparation helped, but I knew we have the character, the fight, the willingness to run, we’ve always had that.

“We have a young team. We made the decision strategically to go after players that have high potential and have not got as much experience in the Premier League.

“I have to be patient, we’re growing through this together and have to try to be intelligent and savvy, but aggressive.

“I will speak to Luis and it’s pretty clear it wasn’t an intelligent decision. He is important for us and we really like him as a guy and as a player.” How to watch Axiom Space send the first all-civilian...

Swing-state voters concerned about Build Back Better’s impact on...

Honda says it has no plan to separate and...

Extreme hoarder jailed for leaving sister to die on...

HiddenLayer emerges from stealth to protect AI models from...

Patrick Jensen: ‘It’s a crazy bond, the trust is...

Meta, Microsoft, Epic Games and others join forces to...

This dangerous Android spyware could affect millions of devices...

Is China Turning Into the Next Japan?

Where home prices are headed in 2023—this map shows...

US Rhodes scholars chosen to begin Oxford studies in...

New York mom reunited with officer and paramedic who...

The East Coast could see dangerous rip currents this...

Andy Parker is calling out tech companies on campaign...

Intel announces details of plan to invest $100M into...

Every Business Could Use a Granfluencer – The Washington...

Browns vs Steelers: Looking back at the Week 8...

Google Stadia’s business model ‘totally killed them’ according to...