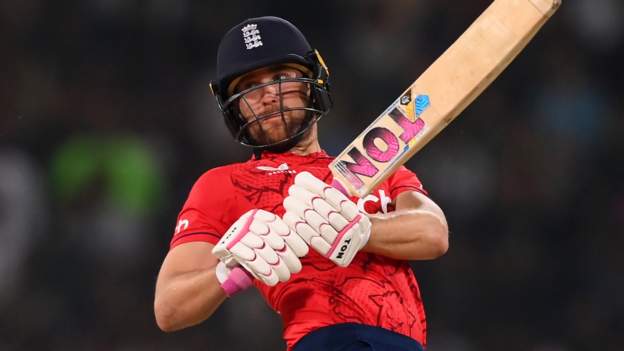 Dawid Malan thumped an unbeaten 78 to help England to a comprehensive 67-run win over Pakistan in the seventh Twenty20 international to take the series 4-3.

Having been asked to bat first in Lahore, England piled on the runs with Malan making Pakistan pay for dropping him on 29 and 62 as he lifted the visitors to 209-3.

Harry Brook’s fine form continued as he made 46 not out from 29 balls – having been dropped on 24 – in an unbroken stand of 108 with Malan.

Babar Azam was responsible for two of those dropped catches and could not atone with the bat, falling to Chris Woakes in the first over of the chase.

England now head to Australia for a three-match T20 series before starting their T20 World Cup campaign against Afghanistan on 22 October. Meanwhile, Pakistan will now travel to New Zealand for a T20 tri-series that also includes Bangladesh.

After their staggeringly quick start in the last game, England’s openers got off to a flyer again but two wickets in three balls brought the onslaught to an abrupt end.

Alex Hales was pinned lbw by Mohammad Hasnain and, two balls later, a mix-up between Malan and Phil Salt saw the latter run out at the non-striker’s end after being turned down for a single.

Salt’s reaction suggested he was in little doubt over where the blame lay but Malan was able to spend the rest of the innings making amends.

The left-hander swatted Shadab Khan over deep mid-wicket for six with Ben Duckett adding another maximum down the ground later in the ninth over to take England’s run-rate back over 10 an over, where it stayed for the vast majority of the innings.

Malan has been short of runs in the series, with a highest score of 36, but with the help of Pakistan fielders, he was able to improve on that.

Firstly, soon after some excellent glovework from Rizwan saw Duckett run out, he drilled Iftikhar to extra cover but Babar shelled the catch.

The Pakistan skipper then dropped a dolly to give Brook a reprieve and deny the impressive Haris Rauf a wicket, and the fast bowler was let down by his fielders again as Mohammad Wasim spilled a skier to give Malan another life on 62.

The former world number one T20 batter further punished Wasim, who went for 61 from his four overs, with his third six of the innings to start the final over as, in a timely return to form, he produced a typical Malan knock: a steady start before a sharp acceleration later in the innings, scoring freely square of the wicket.

‘Nobody likes the approach’ – Pakistan legends unhappy with hosts’ tactics

In a series that has provided so much entertainment, the decider was a let-down.

There has been a sharp contrast in the way the two sides have approached things with the bat and the series finale was perhaps the clearest example of that.

While England have gone hard from ball one and backed their batting depth to enable them to maintain that throughout, Pakistan have adopted a more old-school method, building gradually before going hell for leather in the latter stages.

However, when the openers have not fired, they have run into trouble and, with Babar and Rizwan both dismissed eight balls into the innings in the decider, Pakistan looked to lack the belief that they could win the match and by the time they might have wanted to kick on, the game was lost.

Legendary Pakistan bowler Wasim Akram was particularly unhappy with the home team’s efforts with the bat.

“When Pakistan came out to bat, they thought the match was finished when Babar and Rizwan departed in the second over,” he told Sky Sports.

“I don’t mind any team losing, as long as they go for it, try it. You can’t take the game long because of the required rate. Half the stadium is empty, people have gone.

“The people of Pakistan love and understand cricket. They understand when the team goes for it and loses. But when you are not even trying to win the match, that will definitely hurt the fans.”

Fellow Pakistan great Waqar Younis was also disappointed to see Pakistan’s middle order more concerned with trying to bat out the overs than attempt to chase down the admittedly mammoth target.

“That’s why the criticism is going to come, the crowd have left – nobody likes the approach. The way Pakistan have approached this game, too many dot deliveries, not enough boundaries. They gave up very, very early in the game.”

Google Pixel Watch to get fewer updates than Galaxy...

Sennheiser’s next Dolby Atmos soundbar leaks on Amazon, and...

The Emmys have turned into a battle of the...

Wounded Uvalde teacher who lost 11 kids in his...

In Plenty and In Want

10 running shoes for the new runner

Former rebel Gustavo Petro is sworn in as Colombia’s...

Amazon said to pull out of IPL cricket streaming...

NY Times: Biden contributing to ‘own political woes’ by...

Big Tech Is In a Propaganda Standoff Against Putin

Woman’s body to be exhumed over Kenya cult claims

NYC’s unlicensed marijuana shops are daring the state to...

Patrick Schwarzenegger says his dad Arnold is ‘obsessed’ with...

What Is SWIFT? Latest News on Payment System From...

Relief is coming. Ballots, too

Bob Saget will be laid to rest Friday

Overwatch 1 has no future after Overwatch 2 launches

Lamar Jackson with another mind-boggling play for Ravens
Despite the venture slowdown, fintech startups are still hiring