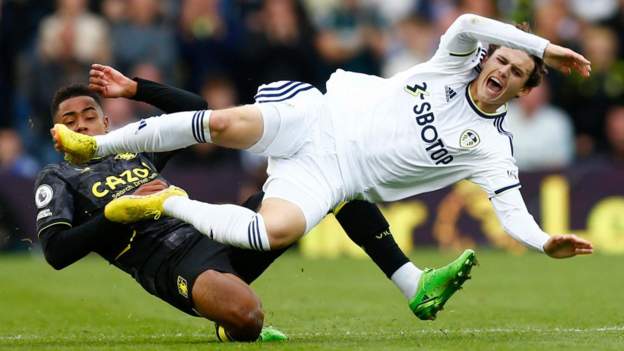 Leeds battled to earn a goalless draw with Aston Villa despite playing with only 10 men for the majority of the second half.

In a bad-tempered match, Colombia winger Luis Sinisterra was sent off after 48 minutes for two bookings – a foul on John McGinn and then blocking the ball when Douglas Luiz tried to take a quick free-kick.

The home side could have won it late on when substitute Patrick Bamford forced a fine save from Emiliano Martinez, with the Argentine also saving Brenden Aaronson’s follow-up.

The ups and downs of football

For 23-year-old Sinisterra, a £21m summer signing from Feyenoord, it was a harsh blow after a great few weeks in his career.

He has scored three goals for Leeds this season and during the international break netted his first ever goal for Colombia in a 4-1 win over Guatemala, quickly following that with two more in a 3-2 victory against Mexico.

But three minutes into the second half, he stuck his foot out to block Douglas Luiz’s free-kick and referee Stuart Atwell showed him a second yellow card.

The home fans and players were furious but the winger eventually left the field. Seconds later, Coutinho hit the post with a volley in a rare moment of skill in a frantic encounter high on passion and commitment. French PM Calls for Strike to End Amid Fuel...

‘Human swan’ Sacha Dench to return to skies after...

Thailand decriminalizes marijuana, but not the strong stuff

Tory donor pleads not guilty to US bribery charges

Peter McGuire on the Markets (Radio)

Planning for the interim

Does Chris Stapleton know when he’s written a hit...

Convective Capital’s $35M answer to the increasing threat of...

Scottie Scheffler shows he has bright future with 2022...

The more success Ukrainians have, the more likely Putin...

Biden Looks to Fund U.S. and Ukrainian Governments in...

Analysis: Workers seize their moment to shift the balance...

Turkish leader to meet Sweden’s new PM over its...

How to pre-order the Google Pixel 7 and Pixel...

Josh Seftel’s mom on crushes and that first kiss

Meta leaps into the supercomputer game with its AI...

Lviv Prepares for Belarus Attack in Western Ukraine as...

Istanbul governor says in a tweet there are dead...

US announces sanctions against Kremlin-controlled media companies and bans...

What if Musk loses the Twitter case but defies...

Plan to cut energy bills if you avoid peak-time...

Tyrick Mitchell England call-up: Who is the Crystal Palace...