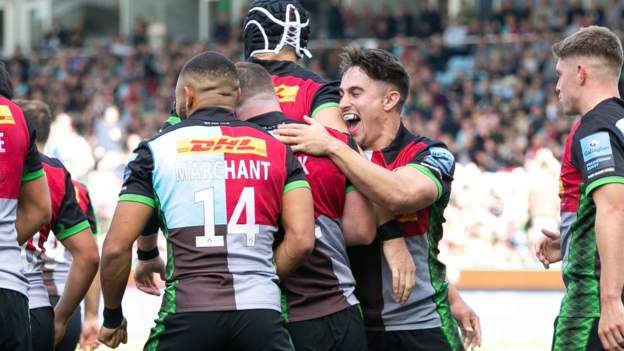 Jack Musk, Lennox Anyanwu and Luke Northmore eased Quins into a 21-3 lead before Lewis Ludlam’s try pulled Saints back to 21-10 at half-time.

Musk crossed again with Saints’ Lukhan Salakaia-Loto in the sin-bin, but Tommy Freeman’s try kept them in it.

Cadan Murley took the hosts clear at 35-15 before tries from George Furbank and Tom James set up a tense finale.

Smith was ‘beers deep’ at pub before making cut

Black Panther 2’s cast have a ‘different idea’ about...

Why are we still using super-greenhouse gases in our...

Takeaways from the Pennsylvania Senate debate between Fetterman and...

The 36 Best Fourth of July Deals on Kitchen...

Russia to bar foreigners from using its surrogate mothers...

Sonos’ Roam speaker is still 20 percent off, plus...

Brazil election: What to know about the high-stakes race

Many workers are either out sick with COVID-19 or...

Boxing champion belt given to Nelson Mandela by Sugar...

Elon Musk Faces Investors in Court Over Tweet to...

Google has a new way of protecting you from...

Cybercriminals have sunk to a new low with this...

I’m A Celebrity: Matt Hancock sings and slips on...

Is Nvidia retreating from the budget GPU market, leaving...

Berrettini vs Nadal live stream: how to watch Australian...

Raducanu marches on in Madrid, Osaka ousted by Sorribes...

CNN Poll: Americans’ confidence in elections has faded since...

Marc Chandler on the Markets (Audio)