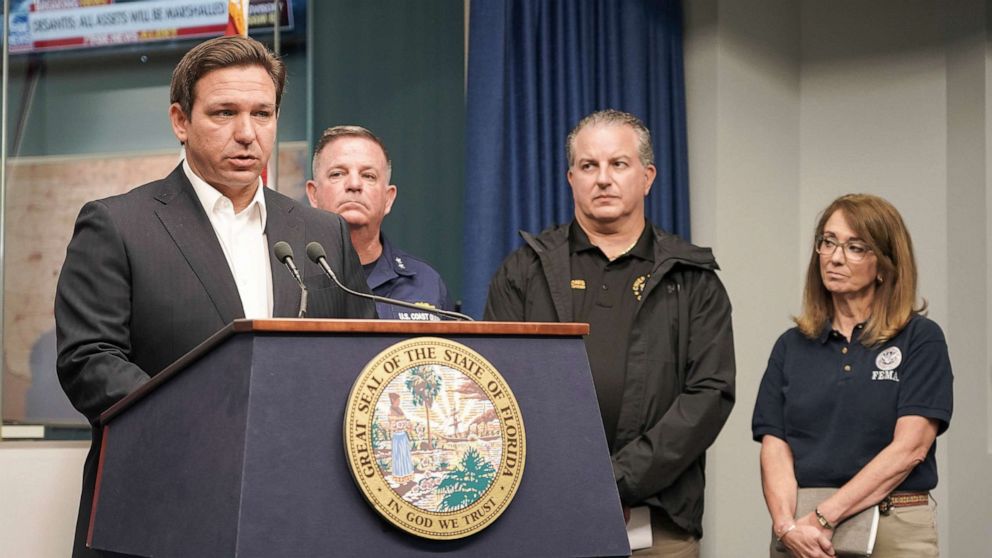 When Ron DeSantis took office as the 46th governor of the state of Florida in January 2019, it was three months after Hurricane Michael blew ashore as the second Category 5 hurricane to make landfall in the United States in the past 30 years.

Although the storm came ashore during former Gov. Rick Scott’s administration, the $25 billion-dollar clean-up would become one of DeSantis’ first responsibilities.

Scott had been famous for forbidding the Florida Department of Environmental Protection to use the words “climate change” and “global warming” in any official communication, but DeSantis took a different approach. Wasting no time, he signed an executive order during his first week in office addressing a series of environmental issues and appointing a chief science officer to “prioritize scientific data, research, monitoring, and analysis. He also announced the creation of the Office of Resilience and Coastal Protection to help communities deal with rising sea levels.

“This idea of, quote, climate change has become politicized,” DeSantis said at a speech in April 2019, “My environmental policy is just to try to do things that benefit Floridians.”

The change in tone from the Scott administration to the DeSantis governorship would appear that Florida, a state highly susceptible to the impacts of global warming, might have a conservative leader ready to move past climate denial and ready to take legitimate action.

While the Scott administration refused to even mention the words “climate change,” DeSantis has also had public moments distancing himself from the issue, dodging a question from a reporter in December 2021 when asked what his administration is doing to fight climate change, the governor replied, “We’re not doing any left-wing stuff.”

But DeSantis is doing some “stuff,” such as signing a bill in 2022 that dedicates $640 million toward preparing communities for sea level rise, flooding and more intense storms.

Still, some experts say he’s missing a big part of the issue. The bill does nothing to address what scientists believe to be the biggest source of all these problems: human-caused climate change.

According to the Environmental Protection Agency, it is “extremely likely” that over 95% of human activity is the “dominant cause” of global warming, leading to climate change, resulting in more severe weather events.

Signing the bill was “a bold first step for Florida in terms of sea level rise and flooding, for sure, but at the same time what it’s missing is anything to actually reduce the cause of the problem — which is greenhouse gas emissions,” Jonathan Webber, deputy director of Florida Conservation Voters, told the Associated Press in 2021.

Another expert who spoke with ABC News agreed that while DeSantis is taking some action to address climate change’s impacts on Florida, the governor could do more.

Cohen said that by investing in adaptation strategies, DeSantis is acknowledging that climate change is a reality, but to mitigate it would mean an investment in reducing Florida’s emissions and positioning the state to enter the competitive race for clean energy alternatives.

“Renewable energy is going to be a lot less expensive than fossil fuels and suddenly [Florida] is going to find its energy economy is not competitive with other places,” Cohen told ABC News. “You would think that solar would be a big thing in Florida, but in fact, the utilities have been discouraging it and the state’s not doing anything to promote it.”

In his four years in office, Hurricane Ian has been the most aggressive storm the governor has faced. The fourth-strongest hurricane to ever make landfall in Florida, it rapidly intensified to a Category 4 as it traveled over the warmer-than-average Gulf waters — a direct consequence of climate change. The storm officially dropped up to nearly 30 inches of rain in two days in some parts of the state with wind gusts peaking at 140 mph. Hundreds of people were rescued, and the death toll has been climbing days after Ian’s landfall.

Just like he did following Hurricane Michael in 2018, DeSantis will focus his efforts to help Florida rebuild. Already, the governor has requested federal aid for all 67 counties for a variety of assistance programs as Ian’s damage is expected to cost $65 billion — a move that some have called out as hypocritical, given DeSantis voted against a federal bailout for Hurricane Sandy victims when he was a freshman Congressman in 2013.

“We live in a very politicized time,” DeSantis said on Fox News the day after Hurricane Ian struck, “But you know, when people are fighting for their lives, when their whole livelihood is at stake, when they’ve lost everything — if you can’t put politics aside for that, then you’re just not going to be able to.”

As DeSantis himself once said, climate change is also a polarizing issue. However, if he wants to continue to fortify Florida against this new generation of hurricanes, experts say doing so only addresses part of the problem. And the situation is all but certain to worsen until the state is willing to address the cause of climate change, and take the measures experts recommend, including decarbonizing the states economy. “He’s gonna have a few million people right now disconnected from the grid for a while,” said Cohen. “He might be wishing for a little bit of solar energy,” he added. UN experts warn of impact of abortion bans on...

Will your nose know lamb? Black Sheep Foods is...

Did Frank Vogel deserve to be fired by the...

A quick checkup on consumer fintech activity ahead of...

Twitter was targeted by a coordinated trolling campaign following...

Why Jaguars fans should be excited about Devin Lloyd

Ashes of Winter the movie star dolphin released into...

Trump: Return of documents to Archives viewed as routine...

Are the Clippers a potential offseason fit for Rockets...

At least 6 people wounded in shooting at school...

No Ukraine War if Biden Had Supplied Weapons Sooner,...

Bills vs Chiefs live stream: how to watch NFL...

Sika to Launch Sale of MBCC Assets After Regulator...

Funeral for Queen Elizabeth II to be held September...