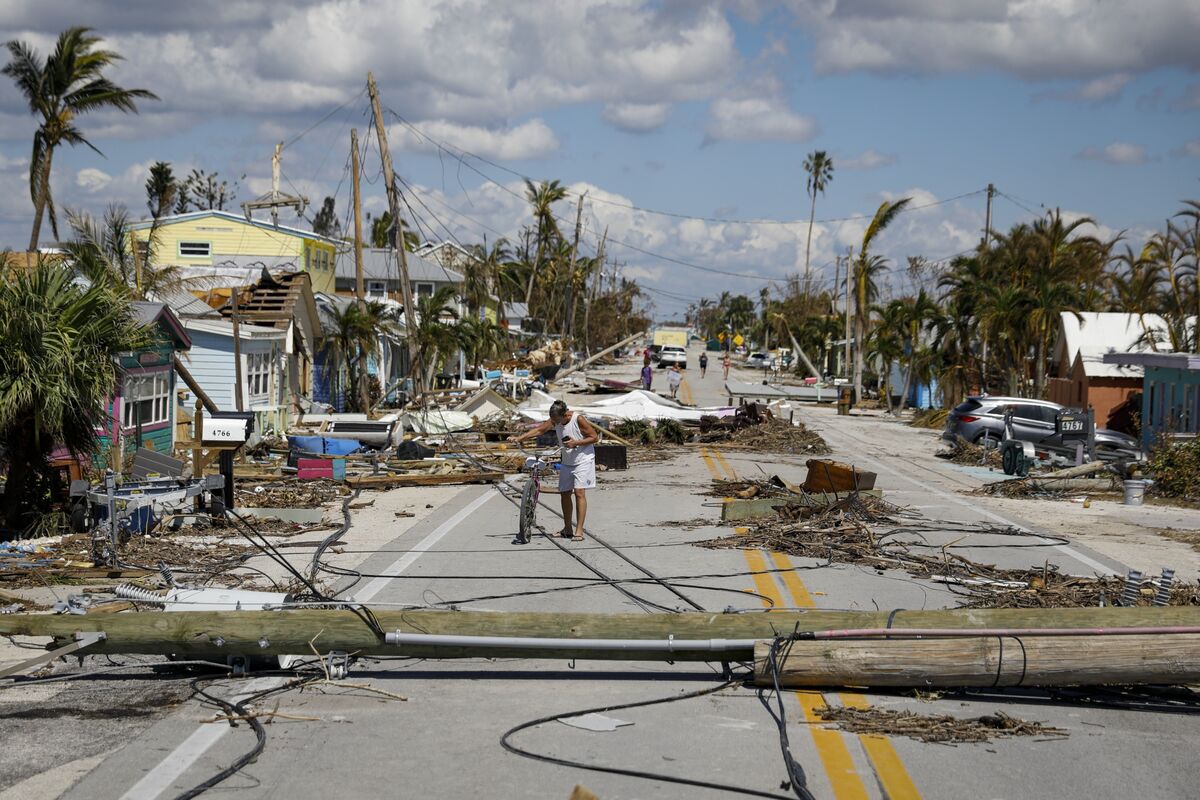 Fort Myers, Fla. (AP) — Rescuers evacuated stunned survivors on a large barrier island cut off by Hurricane Ian and Florida’s death toll climbed sharply, as hundreds of thousands of people were still sweltering without power days after the monster storm rampaged from the state’s southwestern coast up to the Carolinas.

Florida, with nearly four dozen reported dead, was hit hardest by the Category 4 hurricane, one of the strongest to make landfall in the United States. Flooded roadways and washed-out bridges to barrier islands left many people isolated, amid limited cellphone service and a lack of basic amenities such as water, electricity and the internet.

Florida utilities were working to restore power. As of Sunday morning, nearly 850,000 homes and businesses were still without electricity, down from a peak of 2.67 million.

At least 54 people were confirmed dead: 47 in Florida, four in North Carolina and three in Cuba. The weakened storm had drifted north on Sunday and was expected to dump rain on parts of Virginia, West Virginia, Maryland and southern Pennsylvania, according to the National Hurricane Center, which has warned of the potential for flash flooding.

More than 1,000 people were rescued from flooded areas along Florida’s southwestern coast alone, Daniel Hokanson, a four-star general and head of the National Guard, told The Associated Press while airborne to Florida.

In Washington, the White House announced that President Joe Biden and first lady Jill Biden would travel to Florida on Wednesday. But a brief statement did not release any details of the planned visit.

The bridge to Pine Island, the largest barrier island off Floridas Gulf Coast, was destroyed by the storm, leaving it accessible only by boat or air. The volunteer group Medic Corps, which responds to natural disasters worldwide with pilots, paramedics and doctors, went door-to-door asking residents if they wanted to be evacuated.

Some flew out by helicopter, and people described the horror of being trapped in their homes as water kept rising.

The water just kept pounding the house and we watched, boats, houses we watched everything just go flying by, Joe Conforti said, fighting back tears. He said if it wasnt for his wife, who suggested they get up on a table to avoid the rising water, he wouldnt have made it: I started to lose sensibility, because when the waters at your door and its splashing on the door and youre seeing how fast its moving, theres no way youre going to survive that.

River flooding posed a major challenge at times to rescue and supply delivery efforts. The Myakka River washed over a stretch of Interstate 75, forcing a traffic-snarling highway closure for a while before officials said later Saturday that it could be reopened.

While swollen rivers have crested or are near cresting, the levels arent expected to drop significantly for days, National Weather Service meteorologist Tyler Fleming said.

Elsewhere, South Carolina’s Pawleys Island, a beach community roughly 75 miles (115 kilometers) up the coast from Charleston, was also hit hard. Power remained knocked out to at least half the island Saturday.

Eddie Wilder, who has been coming to Pawleys Island for more than six decades, said it was insane to see waves as high as 25 feet (7.6 meters) wash away a landmark pier near his home.

In North Carolina, the storm downed trees and power lines. Two of the four deaths in the state were from storm-related vehicle crashes, and the others involved a man who drowned when his truck plunged into a swamp and another killed by carbon monoxide poisoning from a generator in a garage.

At Port Sanibel Marina in Fort Myers, Florida, the storm surge pushed several boats and a dock onshore. Charter captain Ryan Kane said his vessel was so badly damaged that he was unable to use it to help rescue people, and now it will be a long time before he can take clients fishing again. Treasury to probe Desantis’ use of COVID relief money...

Russia Should Pay for Its Environmental War Crimes

How often, and for how long, should you be...

Ukraine’s first lady speaks and a call for diplomacy...

The best tablets you can buy

Meta sent a new draft decision on its EU-US...

Disneyland Resort Announces Environmental Champion and Team of the...

Tesla doesn’t need to hit the panic button over...

Security expert says London is ‘better prepared’ for a...

Secret Service on the defensive over allegations agents were...

Someone made an operating system for the NES

Is Time Up For the Dollar’s Rally? Not So...

Opinion: Climbing a mountain can be hard. Child-centered parenting...

Scammers take to GitHub to hoodwink other cybercriminals

Quake of magnitude 6.1 hits in Pacific off southern...

What we know about the DHS investigation into extremism

Rubio and FEMA chief on Ian's devastation: 'I don't think it has...