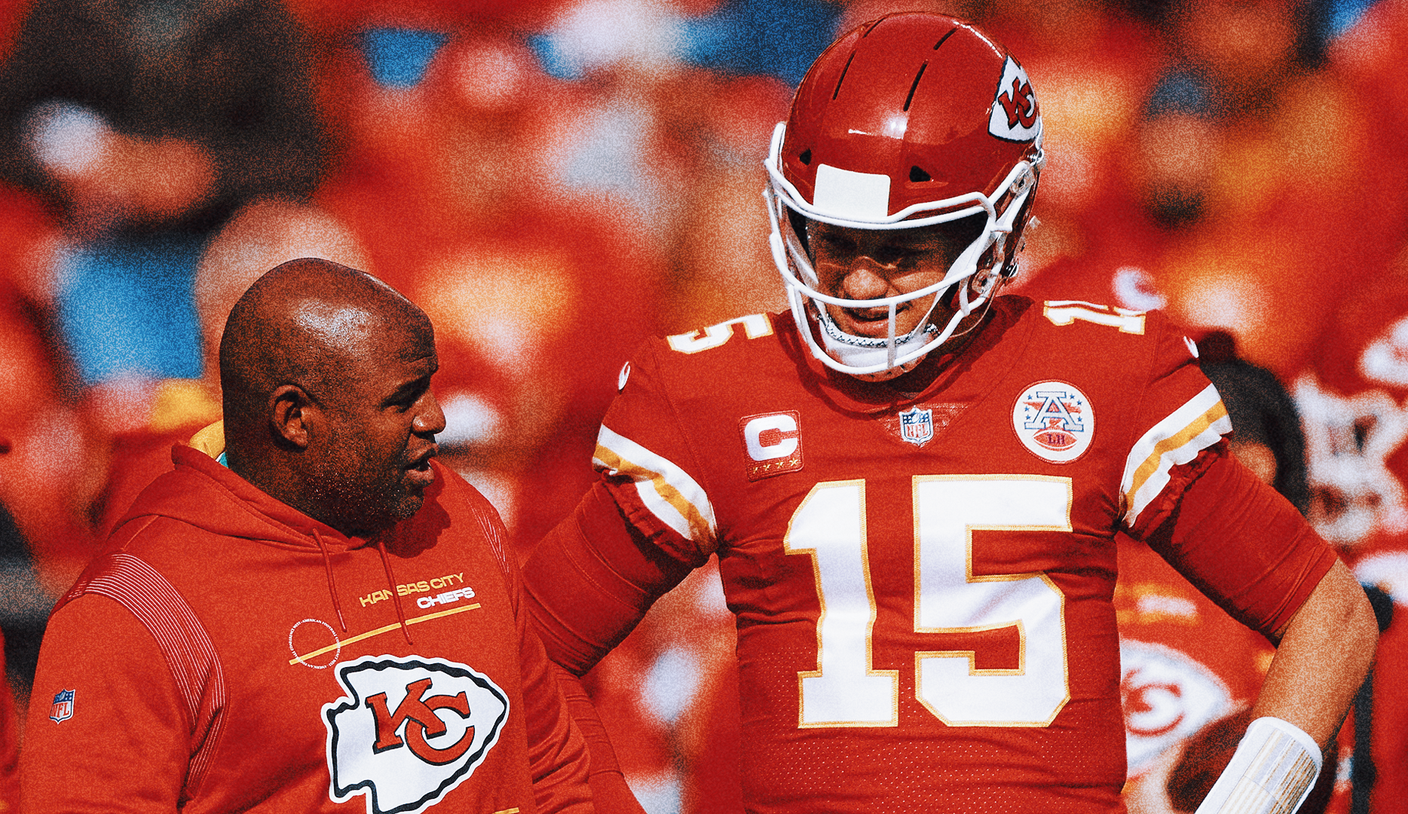 Chiefs quarterback Patrick Mahomes and his offensive coordinator Eric Bieniemy were caught exchanging contentious words during the team’s 20-17 loss to Indianapolis this past Sunday. The story didn’t end there, of course.

Social media as it is wont to do took the footage of Mahomes offering choice words to his OC and coach Andy Reid and ran with it, unleashing a slew of speculation on the possibility of a larger problem within Kansas City’s locker room.

But “The Herd” host Colin Cowherd didn’t want to hear any of it, arguing Friday that the spat was nothing to ruminate over.

“Sometimes the appropriate answer is, who cares?'” Cowherd asserted. “Don’t give a story oxygen, don’t feed the media. So Eric Bieniemy and Patrick Mahomes had this little skirmish and I thought Bieniemy had a great answer [later]. ‘Who cares? This is what we do.’ Players and coaches bark all the time. By the way, Tom Brady got in the face of Josh McDaniels and was screaming at him. It was on tape, and they won the Super Bowl that year. A coach can’t occasionally get a player riled up? Players are yelling at coaches all the time.

“I saw a player for the Jets last week get in the face of a coach. Who cares? I thought Bieniemy nailed it. Dispassionate, indifference bothers me. Very rarely does passion get under my skin, or worry me.”

Mahomes and his offense notably struggled in Week 3. After erupting for five touchdowns in Week 1, followed by 235 yards and two scores in Week 2, Mahomes completed just 57.1% of his throws with one TD and an interception versus Indianapolis.

Before entering the locker room at halftime, Mahomes appeared to take exception to conservative playcalls late in the quarter as he confronted Bieniemy. For Cowherd, it was typical workplace behavior that just so happened to be caught on camera.

“All of us work in certain industries,” Cowherd said, “We are insiders. And then there are outsiders, and often outsiders can’t believe what’s going on. And I’m always like, who cares? We know what were doing.’ Same in football 99% of people in America do not do their job on camera. Football players do. So sometimes people are just outraged as outsiders by things they see.

“Remember Ken Dorsey, the coordinator for the Buffalo Bills? Everybody’s freaking out, I cant believe this.’ I can, they’re coaches. Remember how the other coaches reacted to Ken Dorsey freaking out? It’s like it didn’t even happen. They yell and scream all day. You’re an outsider, you’re not an insider, you have no idea of the swearing, intensity, passion. You think that’s the first time that’s happened?”

Head of U.S. Customs and Border Protection resigns amid...

Gold Fights Off Rising Rates, Bitcoin to Be Haven...

A NASA capsule with dummy astronauts on board just...

Julius Baer Pulled In $4.3 Billion Since June as...

In battle against far-right extremists, an old strategy re-emerges:...

Hungary Puts Spanner in Works of Ban on Russian...

Brazil on edge for a bicentennial Bolsonaro has made...

How an increasingly popular supplement landed a man in...

Gus Will ‘Take Matters into His Own Hands’ in...

No charges to be filed in Wisconsin drawbridge death

Biden Says US Will Provide Advanced Rocket Systems to...

Alright Elon, don’t fuck it up

Here are the possible new names for 9 Army...

Meta’s rebranding of Facebook Pay to Meta Pay is...

Why a16z pitched Deel to lead its Series A...

Cozy houseplants and self-care: how one startup is reimagining...

Using Genetics as a Tool for Disease Diagnosis (Podcast)

Sydney McLaughlin sets another world record in the 400m...

What the CBS News uproar over Mick Mulvaney tells...

The City’s Radical Dream is Dead

The history of the “Popemobile”

Disney Appoints New Board Member in Standstill Deal With Loeb