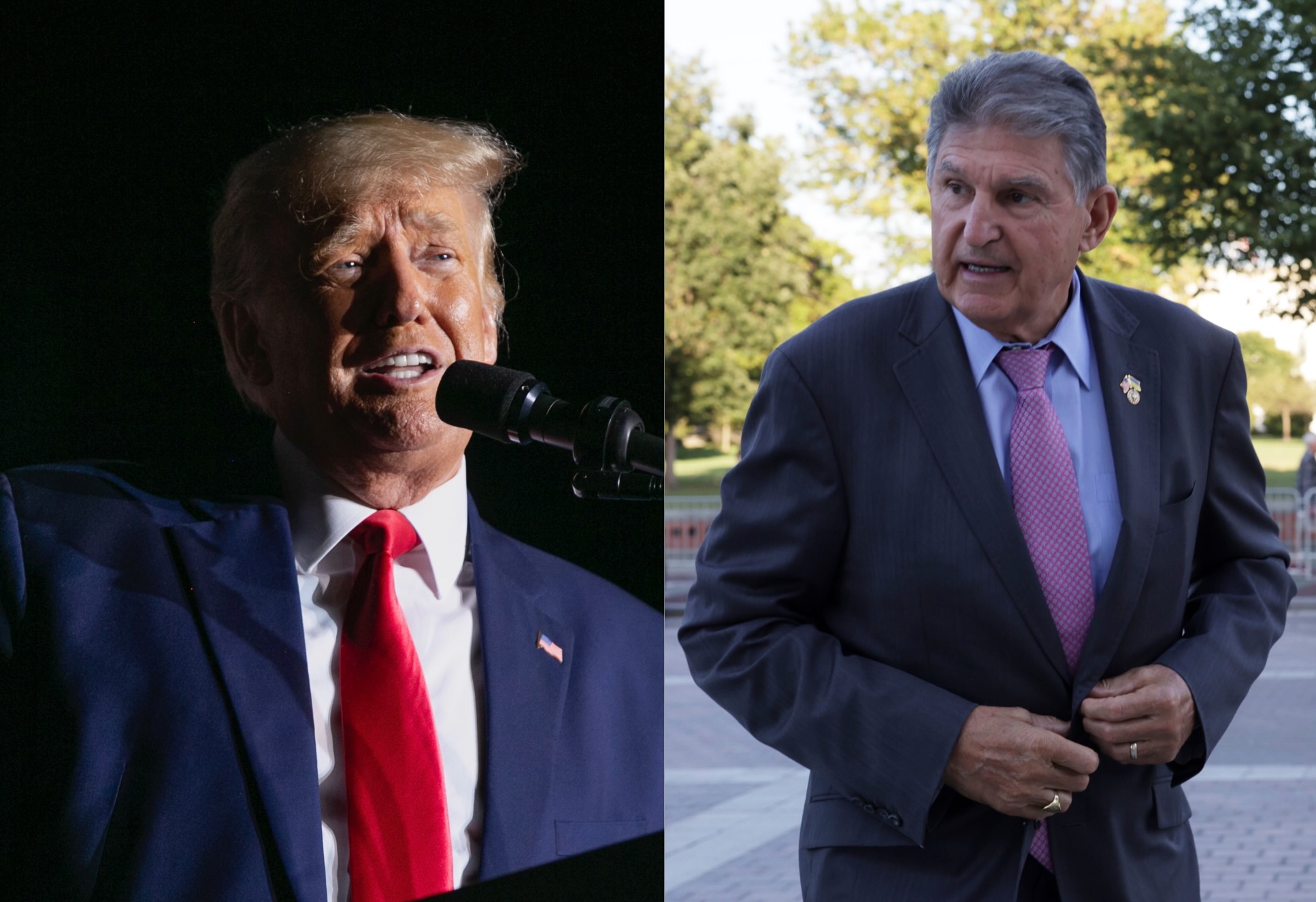 Former President Donald Trump has concluded that Senator Joe Manchin should have been courted by Republicans “long ago” and is “off the rails” due to a dispute with Senate Minority Leader Mitch McConnell.

Manchin, a moderate Democrat from West Virginia, agreed on Tuesday to drop his demand to attach energy permitting reforms to the stopgap bill to fund the government, allowing the bill’s advancement and Senate approval. Manchin’s proposal had faced bipartisan opposition, with McConnell leading the Republican charge for it to be excluded from the larger bill.

Manchin said in a statement that he asked Senate Majority Leader Chuck Schumer to remove his proposal due to his “firmly held belief that we should never come to the brink of a government shutdown over politics.” A short time later, Trump said in a series of Truth Social posts that Manchin’s issues with McConnell had resulted in Republicans being unable to convince him to switch parties.

Former President Donald Trump, left, during a rally in Wilmington, North Carolina, on September 23, 2022; Senator Joe Manchin, right, outside the U.S. Capitol in Washington, D.C., on September 27, 2022. Trump said on Tuesday that Manchin “should have been brought into the Republican Party long ago.” Left: Allison Joyce, Right: Alex Wong/Getty Images

“When people ask, ‘What happened to Joe Manchin, why did he go off the rails?’ The answer is very simple—Mitch McConnell forced his hand by saying that Manchin was weak and ineffective and that he, McConnell, had him totally under control,” Trump wrote. “Manchin couldn’t stand for that and turned strongly, not against the Republicans, but against McConnell, who he has always despised. The fact is, Joe Manchin should have been brought into the Republican Party long ago.”

“So sad for our Country that now we are wasting Trillions of Dollars on the Green New Deal Hoax, and other like disasters, that will lead to even higher inflation and ultimately, economic destruction,” he added. “With all of that said, who the ‘hell’ can blame Joe Manchin for doing what he did?”

Manchin, who has earned a reputation for being a frequent Senate roadblock to passing President Joe Biden’s agenda alongside fellow moderate Democratic Senator Kyrsten Sinema of Arizona, has repeatedly denied any suggestions that he may abandon the Democratic Party to become a Republican.

However, a passage from the book This Will Not Pass: Trump, Biden, and the Battle for America’s Future, which was authored by New York Times reporters Alex Burns and Jonathan Martin and published earlier this year, claimed Manchin said last year that he would join the GOP on the condition that McConnell was ousted as the Republican leader.

McConnell denounced Manchin on Tuesday for voting to approve the “reckless spending spree” of the Inflation Reduction Act, which he said the West Virginia senator had supported in exchange for guarantees from Biden and Schumer that his energy permitting proposal would pass by the end of the year.

“But now, very predictably, this backroom deal is crumbling before our eyes,” McConnell said. “Almost sixty days after our colleague from West Virginia gave up his vote for this vague promise, it still appears the far left and House Democrats want no part of this backroom deal they didn’t sign onto.”

World Cup 2022 odds: How to bet Cameroon vs. Serbia, pick

NFL receiver charged with assault for shoving worker on...

King Charles III to Address the Nation as Britain’s...

U.S. captives ‘prayed for death’ on brutal ride from...

Even Tetris players don’t know what the future holds...

Is Abortion Your ‘Personal Business’?

Stocks make gains as Fed hints at another interest...

E-Scooters on Island of the Gods Demonstrate Asia’s Green...

Ford will reopen F-150 Lightning orders this week at...

Highlights: England comfortably beat France to all but secure...

Adele ‘Thrilled’ to Be Back in UK for First...

Queretaro v Atlas: Home side must play behind closed...

Sue Gray: Johnson focused on saving his own skin,...

How this mother and daughter became co-founders and are...

HBO Max’s revival of ‘The Boondocks’ has been canceled

The left wants to use education to ‘disrupt’ and...

Nigeria’s Chibok girls: Why was this former captive treated...

As nationalism rises, Turkey turns against refugees it once...

Dungeons and Dragons owner Hasbro buys up D&D Beyond

Why M&G’s Eric Lonergan Believes We’re at the Start...

Patrick Mahomes, Josh Allen are competing to be the...