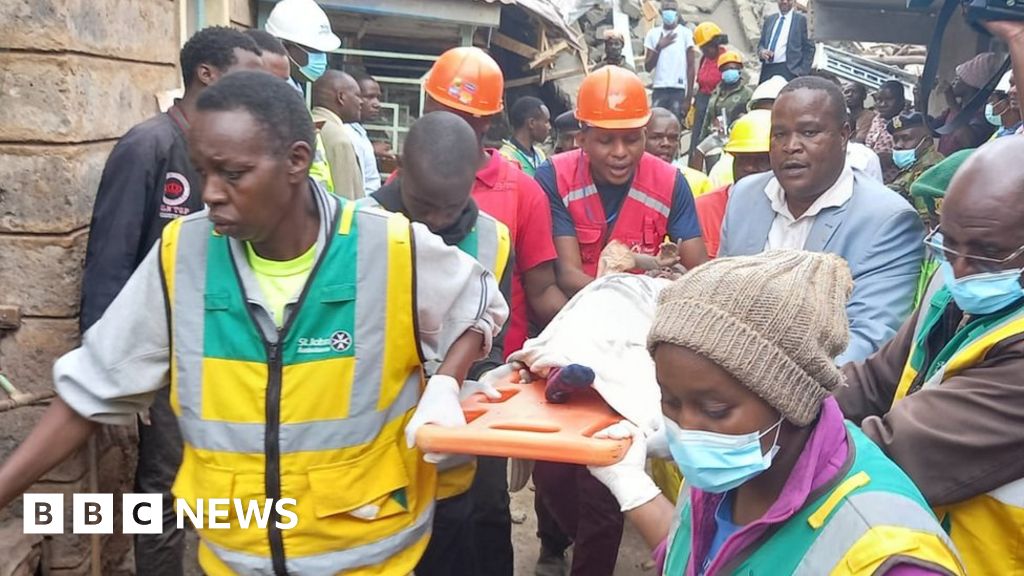 Emergency workers have managed to rescue a child who had been trapped in the rubble after a building collapsed in Kiambu, central Kenya.

Several others have also been pulled out alive after a six-storey building came down, Kiambu county Governor Kimani Wamatangi said.

“Sadly, some are feared to have succumbed to their injuries,” he added.

The cause of the collapse is not clear but it is reported that the building was under construction.

Eyewitnesses have said it fell on to an adjacent building as it came down. It is not known how many people are still under the debris.

Photos from the scene show a mechanical digger and rescue workers trying to find survivors.

Donald Trump Is Pretending to Be Subservient to Putin,...

I was a lead author on the climate report...

Might the play of Bailey Zappe create QB controversy...

Russia Resorting to Out of Date Missiles as Weapon...

Ripley’s Believe It Or Not! museum to close in...

Beyonce, Mick Jagger and the Future of Work

The super-versatile Instant Pot is back to its lowest-ever...

US CPI: Core Inflation at 40-Year High in September,...

Want a free Steam Deck? Here’s how you can...

Russian aircraft buzz US Navy patrol planes, get within...

Why heat makes you feel tired and sleepy, according...

Next China: Let It Rip

Jobs report to show whether hiring is slowing as...

Protests grow in Puerto Rico amid demands for higher...

Fitbit’s new Sleep Profile tells you what kind of...

Clearcreek Officer Shot in the Head, in Critical Condition—Police

Kurt Busch out of NASCAR playoffs: What it means...

Tesla Deliveries From China Jump, but BYD Races Ahead...

Ultra-wealthy investors are pouring their money back into stocks,...

University of Utah suspends all fraternity and sorority social...

LGBTQ activists in Peru demand autopsy for death in...

Successors to Johnson seek to stand out in crowded...

All Those Real-Economy Pandemic Price Surges Are Going in...

OnePlus 10T review: Speed above all

Musk spars with advocates over hate speech on Twitter

The English boss with imposter syndrome at World Cup

Coroner to write to Tesco after Conwy paddleboard death

This week on “Sunday Morning” (June 5)

The Taliban order a return to the burqa

Apple Pay Later could be facing some serious delays