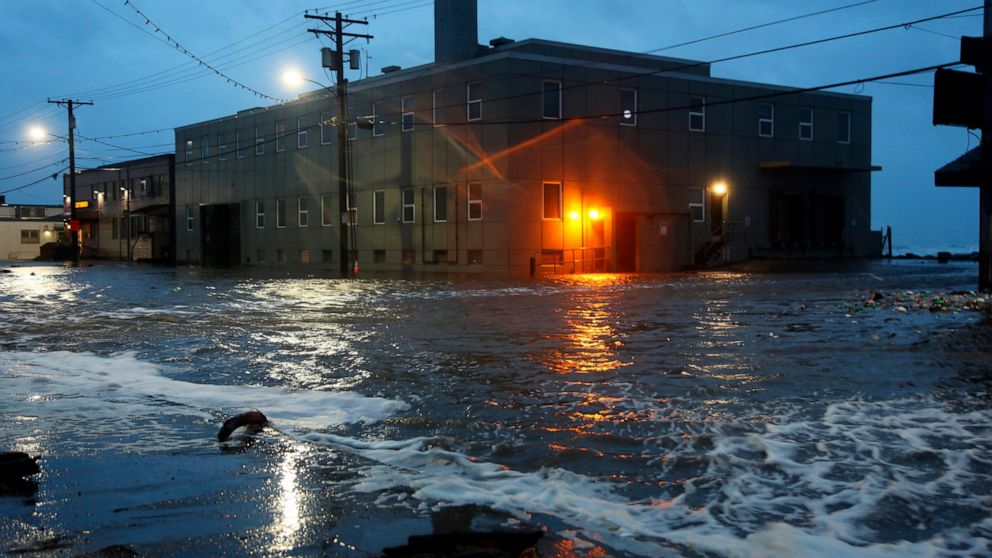 For the most part, people are recovering and digging out, he told a news conference.

There were no injuries or deaths reported after the storm, the remnant of Typhoon Merbok, traveled north through the Bering Strait. It brought tidal surges and high winds that ripped up the main streets in several communities and pushed homes off foundations in what was described as the worst storm in a half century.

About 21,000 people living along a 1,000 mile (1,609 kilometer) stretch of Alaskas western coast a distance longer than the California coastline were affected by the storm.

Among the communities hardest hit was Nome, famous for being the finish line of the Iditarod Trail Sled Dog Race each March.

Ryan Anderson, head of the state transportation department, said many repairs are needed, including fixing torn up pavement on the town’s main street and removing storm debris.

A highway that connects Nome to the tiny community of Council, about 70 miles (113 kilometers) away, was also heavily damaged. Up to 10 miles (16 kilometers) of that road were totally obliterated, he said, with heavy damage occurring on another 10 more miles (16 more kilometers) or so.

Two bridges on the road are in good shape, but the approaches so the bridges were damaged.

The state has already connected with contractors in Nome to begin repair work on the street and road, and engineers are in place. That work is happening immediately, he said.

They are working with contractors to repair damage in other communities. A plane for surveyors is waiting for better weather in Nome to fly.

Were going to map this entire area along Norton Sound to make sure were documenting these damages and were moving forward to repair them, he said.

The most damage in Golovin occurred on a spit, where homes were slammed by waves and knocked off their foundations. Large shipping containers were strewn up to 2 miles (3 kilometers) across the bay, Dunleavy said.

There are few roads in western Alaska and none that connect to the state’s contiguous road system, leaving communities to rely on air travel. Anderson said the airports survived the storm well.

All airports on the west coast are operational and as of today, all of our lighting systems are working, he said.

Dunleavy said it was too early to determine the cost of all repairs, but he anticipated getting some estimates for road and airports within a few days.

The states emergency management director, Bryan Fisher, said the state is awaiting word if its request for a federal disaster declaration to bring in additional resources, personnel and financial support will be approved.

Dunleavy on Saturday approved a state disaster declaration. Fisher said they are focused on getting supplies like plywood, insulation and tin to repair roofs to make sure we can button up homes and make sure residents out there have a safe, warm place to be before winter shows up.

About 130 members of the Alaska National Guard and other military organizations have been activated to help remove debris and clean up after the storm, and to talk to residents.

We want to go out with compassion and want talk to the people and make sure that were taking care of their needs, said Maj. Gen. Torrence Saxe, the states adjutant general and commissioner for the military and veterans affairs department.

Dunleavy said he plans to visit these communities again early next month to see how much progress has been made.

U.S. has intel that Russian commanders have orders to...

No new COVID cases in NZ camp ahead of...

Pelosi in Jerusalem: US support for Israel is ‘ironclad’

Australia election: A great shock to the system

Ukraine and Russia to face off at World Court...

Not prosecuting Trump for Jan. 6 would fuel a...

Windows 11 may not be as popular as Microsoft...

Never update your iPhone? You could be about to...

Frustration mounts in Uvalde over shifting narratives about school...

The biggest health risks women would face if Roe...

Covid in Wales: Staffing and surgery backlog the post-pandemic...

Peter Thiel to Leave Meta Board to Pursue Trump...

What the potential JetBlue and Spirit merger could mean...

Biden to take another swipe at ‘MAGA Republicans’ in...

Devastating images out of Ukrainian town of Bucha draw...

Mocked by Biden as “rubble,” the Russian ruble has...

‘Horrific For Disney’, Mollie Hemingway On The National Popularity...

The Benefits of Gaming As a Couple—or Even With...