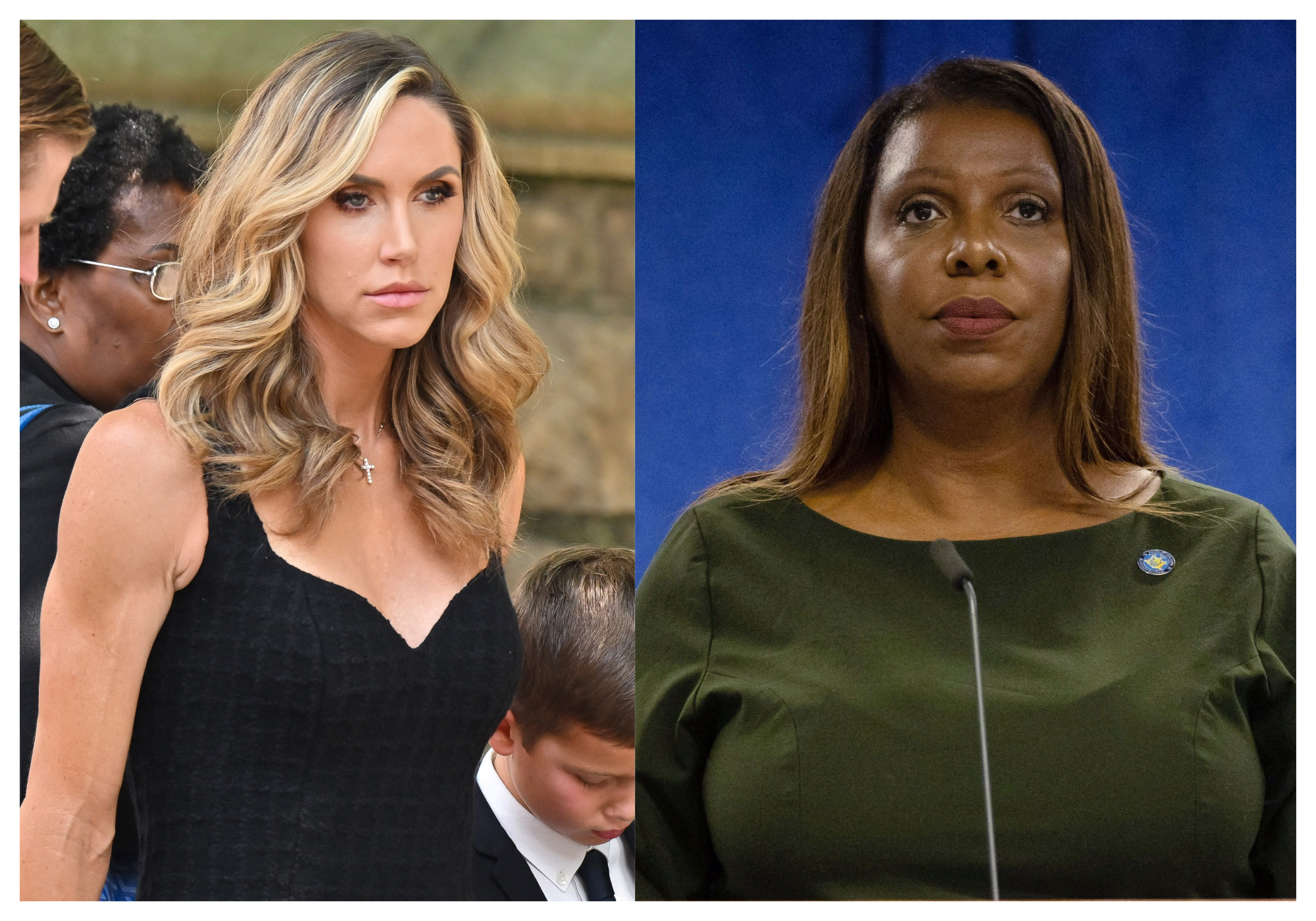 Lara Trump, left, attends the funeral of Ivana Trump in New York City on July 20, 2022, while New York Attorney General Letitia James, right, is shown during a press conference in New York City on September 21, 2022. Trump on Thursday suggested that James could be responsible for children dying of cancer due to her investigation of Trump’s father-in-law, former President Donald Trump, and three of his children, including her husband Eric Trump. Left: James Devaney/GC Images, Right: YUKI IWAMURA/AFP/Getty Images

Lara Trump has suggested that children are dying of cancer due to New York Attorney General Letitia James investigating her husband Eric Trump and her father-in-law, former President Donald Trump.

Eric Trump is among three of the ex-president’s children who were named alongside him as defendants in a $250 million civil fraud lawsuit filed by James on Wednesday. During an appearance on Fox News’ Fox & Friends on Thursday, Lara Trump speculated that children were dying due to James targeting her husband.

She pointed out that James’ investigation had included an examination of a charity that Eric Trump had founded. The charity donated to St. Jude Children’s Research Hospital, which specializes in treating pediatric diseases that include sometimes-fatal childhood cancers.

“My husband started a charity to raise money for kids at St. Jude Children’s Hospital,” Lara Trump said. “When he was 22 years old, he raised $30 million for the kids of St. Jude. And Letitia James has such vitriol and hatred for anyone with the last name ‘Trump’ that she decided to investigate my husband’s charity despite the fact that it had one of the lowest expense ratios of any private charity in America.”

“And unfortunately, guess who was hurt by that?” she continued. “It wasn’t my husband, it’s the kids of St. Jude. Who knows how many kids have died unnecessarily thanks to her investigation and her vitriol and hatred for anyone with the last name ‘Trump.'”

Trump did not provide specifics on how James’ investigation could have caused the deaths of children.

Eric Trump’s charity has previously been accused of telling donors that contributions would go to help children with cancer and instead funneling the funds into different causes, according to Forbes.

Trump has defended his record, boasting last year that he had raised $25 million for charity “by the age of 30.”

James’ lawsuit does not concern Eric Trump’s charity. Instead, it accuses the former president, Eric Trump, Ivanka Trump, Donald Trump Jr. and two former Trump Organization executives of fraud by participating in a scheme to “knowingly and intentionally” file more than 200 false and misleading valuations of company assets between 2011 and 2021.

“With the help of his children and senior executives at the Trump Organization, Donald Trump falsely inflated his net worth by billions of dollars to unjustly enrich himself and cheat the system,” James said in a statement after the suit was filed.

“In fact, the very foundation of his purported net worth is rooted in incredible fraud and illegality,” she added. “Mr. Trump thought he could get away with the art of the steal, but today, that conduct ends.”

Eric Trump called James’ lawsuit “not shocking” in a Truth Social post on Wednesday, suggesting that the suit was politically motivated and sharing a poll indicating that James’ reelection bid could be faltering as she slightly trails her Republican opponent in November’s election.

Former U.S. Attorney General William Barr also accused James of participating in a “political hit job” by involving the former president’s children in her lawsuit during a Fox News interview on Wednesday, arguing that the children would not “know the details” of the alleged false valuations despite having held top positions within the Trump Organization.

Newsweek has reached out to James’ office for comment. Euro falls below dollar for first time since 2002

Fourth of July travelers to face flight delays and...

West Virginia needs the Build Back Better Act to...

A Deeper Look At Zelensky And Putin

Microsoft calls on IT admins to take extra steps...

Let’s Celebrate ‘Together We Are Magia’ at Walt Disney...

Ukraine leader: The world’s future being decided in Ukraine

Actress Amanda Bynes files to end her conservatorship after...

Spain is latest nation with reports of nightclub needle...

Tiafoe can’t continue rare run at US Open for...

Hospitals report more cases of parechovirus in infants: “This...

How the overturning of Roe v. Wade could impact...

MoviePass returns with a tiered plan but can you...

Navy to comply with emergency order on leaking Pearl...