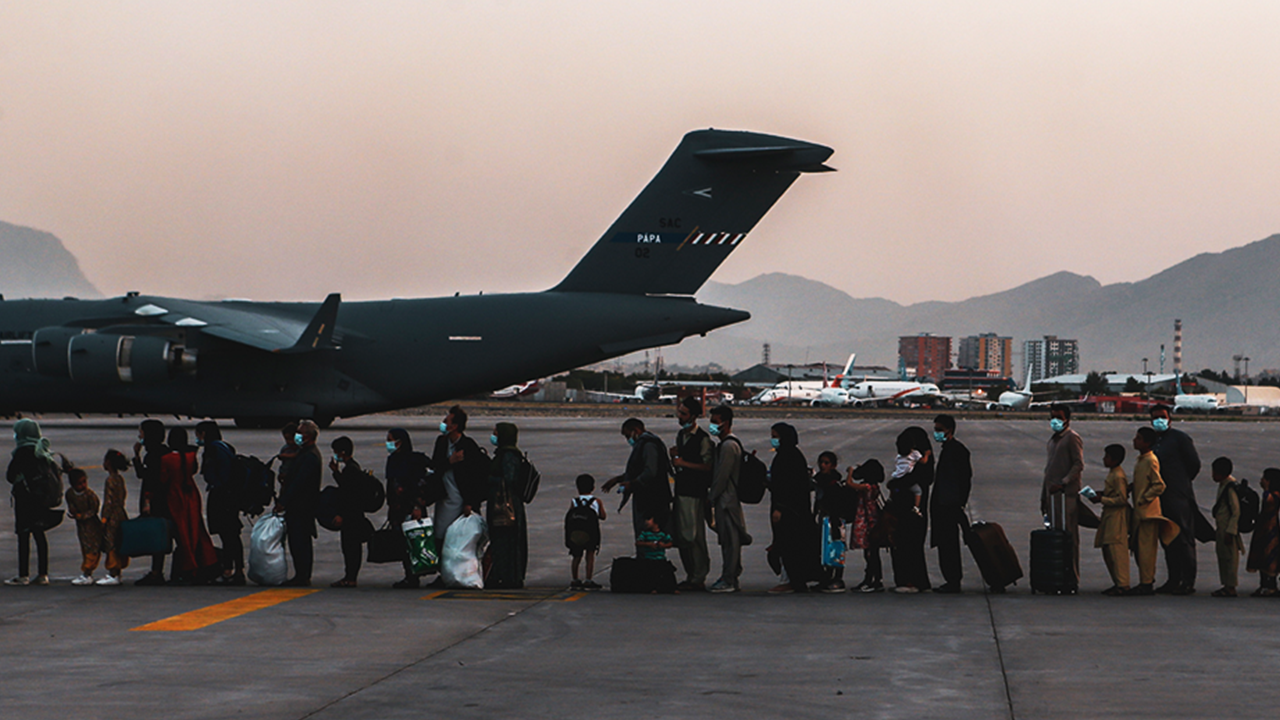 A flight carrying about 75 unaccompanied Afghan children who fled the country during the U.S. withdrawal arrived in Chicago on Wednesday, according to city officials and local media reports.

The Department of Homeland Security confirmed the flights arrival from Qatar, where many Afghan refugees have been held prior to their resettlement, the Chicago Sun-Times reported.

A Chicago city official said about 75 unaccompanied minors were on board the flight. A spokesman for Chicago Mayor Lori Lightfoot said city officials would work to “ensure the well-being of these children.”

“Chicago will always be a welcoming home to those displaced and we will work with our State and federal partners to ensure we support the Afghanistan minors who arrived this morning,” the spokesman said.

The unaccompanied children will either be released into the custody of a vetted relative or remain with the Office of Refugee Resettlement until they can be resettled, a DHS spokesperson told the Sun-Times.

Federal officials are in the process of relocating thousands of Afghan refugees who were evacuated prior to the permanent U.S. withdrawal from the country at the end of September. Earlier this month, Secretary of State Tony Blinken traveled to Ramstein Air Base in Germany to meet with unaccompanied Afghan children housed at the facility. Dementia in football: Simple measures would protect ‘generations to...

Chris Sutton says "simple measures" such as temporary concussion substitutes and a limit on heading in training would "protect generations to come".
Read more

Arsenal 3-1 Tottenham: Gunners have had false dawns before...

Fauci believes Johnson & Johnson vaccine will get back...

Top U.S. infectious disease expert Anthony Fauci on Thursday said that he is hopeful that the distribution and administration of the Johnson & Johnson coronavirus vaccine will get "back on track" soon.
Read more

Taiwanese Defense Minister Chiu Kuo-cheng said on Wednesday that tensions with China are the worst they have been in 40 years.Chiu gave this dire assessment to lawmakers while promoting a new $8.6 billion military...
Read more

Spin e-scooters and e-bikes will show up as a transportation option on Google maps, Fo...
Read more

A bipartisan Senate infrastructure group is struggling to break an entrenched stalemate over the final details of their $1.2 trillion proposal, sparking an increasingly public blame game between Democrats and Republicans....
Read more

The next Google wireless earbuds are here following weeks of speculation.
Read more

Omicron could be peaking in the US — but...

A downtick in COVID-19 cases is raising hopes that the omicron wave has peaked in the United States. To be sure, new case numbers remain high and hospitals are still overwhelmed in many areas. But, especially in the earliest hard-hit states...
Read more

Climate change activist Greta Thunberg says it is "very unclear" if she has been officially invited to the climate change summit in Glasgow.
Read more

Driving equality – how women and men compared in...

In a brand new motorsport promoting equality between women and men, how did their performances compare in the first of five X-Prixs?
Read more

President Trump's is taking aim at a new target: the Freedom Caucus. He says the hard-line Republican House members "will hurt the entire GOP agenda if they don't get on the team." Washington bureau chief for the New York Daily News, Cameron Joseph, joins CBS…
Read more

Adidas AG and Peloton Interactive Inc. are teaming up to create a co-branded apparel collection, seeking to tap demand for athletic gear as people look to stay active at home during the pandemic.
Read more

Western Isles Council has no female councillors after returning only male candidates in 2017.
Read more

The PS5 restock this week will likely start on Tuesday, April 6. Here's when and where to buy it at top stores in the US.
Read more

Jack Lis, 10, died from "severe injuries to the head and neck", an inquest hears.
Read more

Three Republican senators say they won’t back President Biden’s nominee to serve as the top lawyer for the intelligence community because of his past experience working for a Chinese company accused of intellectual property theft.Christopher...
Read more

Britney Spears and her father Jamie’s relationship is ‘complicated...

On Wednesday, the “Toxic” singer is set to appear virtually at a conservatorship hearing. The conservatorship was instilled after Spears' meltdown well over a decade ago.
Read more

President Biden signed an executive order on Friday promoting economic competition, which will give his administration the power to crack down on some businesses who use monopolizing practices. Jeff Stein, an economics reporter for The Washington Post, joins …
Read more

Dominican Republic Cracks Down on Migration Amid Chaos in...

The Dominican Republic is suspending student visas for Haitians and may review the immigration status of hundreds of thousands of foreigners as it continues to tighten its borders amid growing chaos in neighboring Haiti.
Read more

Euro 2020 fans should avoid attending games if they have any COVID-19 symptoms and wear masks in stadiums allowing around 50% capacity, a European Union agency urged on Thursday, amid concern the tournament could spread infections.
Read more

The United States announced on Friday that an airstrike killed a senior al-Qaeda leader in Syria.
Read more

The total number of coronavirus-linked deaths in NI since the start of the pandemic is 2,567.
Read more

Canada joins US and allies in Beijing Olympics boycott

Canada is joining the United States, the United Kingdom and Australia in a diplomatic boycott of the Beijing Winter Olympics over human rights concerns
Read more

The Supreme Court's ruling against vaccine-or-test rules for businesses dealt a major blow to the Biden administration's efforts to combat the pandemic, leaving them without many more tools to boost the number of people v...
Read more

Even Soccer Couldn’t Save Chinese Billionaires From Xi’s Crackdown

Holiday rom-com ‘With Love’ follows Latino family for a...

New Zealand to allow IS-linked mother to be repatriated

Permission for a mother and her children to travel was not taken lightly, NZ prime minister says.
Read more

Covid: Live events to be protected by £750m government...

Music festivals are among the events that will be protected if they are forced to cancel.
Read more

A suicide bomber targeted a queue of new recruits waiting outside the base, a witness says.
Read more

$30 million in the state's budget will be used to create a statewide incentive program to help landscaping businesses transition to zero-emission equipment.
Read more

Los Angeles County reported nearly 45,000 new COVID-19 cases over the holiday weekend.With 23,553 new cases recorded on Saturday and 21,200 on Sunday, the weekend figures were down from over 27,0...
Read more

President Joe Biden and Vice President Kamala Harris are in Georgia to speak about the effort to pass federal voting rights legislation. The president is expected to endorse filibuster reform to pass bills without Republican support in the Senate. CBS News se…
Read more

Move by Catholic bishops against Biden brings howls of...

Catholic bishops who voted to advance an effort that could deny President Biden communion over his stance on abortion are being accused of hypocrisy by critics of the decision.Biden, just the second Catholic U.S. p...
Read more

Images appearing to suggest that tickets are being sold for the ceremony in front of the U.S. Capitol steps on August 15 have appeared online.
Read more

A woman is arrested on suspicion of gross negligence manslaughter after nine rescued from river.
Read more

‘Jill from Philly’ meets the Queen

Almost five months into her new job, Jill Biden is still revealing what kind of first lady she wants to be, but one thing is already clear: you can call her "Jill."
Read more

FAA chief: ‘We should all be concerned’ about uptick...

The Federal Aviation Administration (FAA) is continuing its crackdown on disruptive passengers as the agency continues to see more incidents than years prior.
Read more

If your mouse or keyboard has been looking a little ragged of late then good news – the Amazon Prime Day sale has some great deals for you.
Read more

The week in 40 photos

Florida has reversed its decision and will now allow a city to decorate its bridge for Pride Month.
Read more

Ahead of the Beijing 2022 Winter Olympics, an official said that athletes could be punished for behavior that violates the Olympic spirit, "especially against Chinese laws and regulations" on human rights....
Read more

Oasis contract requesting ‘sober’ staff to be sold in...

Seven hundred sheep and goats were arranged in a field to form a giant syringe to promote COVID-19 vaccinations in Germany, ...
Read more

‘Free Larry Hoover’ Concert Merch: All The Items On...

Kanye West and Drake collaborated on the "Free Larry Hoover" concert on Amazon Prime Video, and merchandise is still available to remember the occasion.
Read more

"Saying I am a suicide bomber is no laughing matter.... Normalizing this bigotry not only endangers my life but the lives of all Muslims," Rep. Ilhan Omar said.
Read more

There is a COVID case in your house. What...

Biden says the “U.S. is back” when meeting with...

The season finale of "The Wheel of Time" is now airing on Amazon Prime Video – but is the Rosamund Pike series set to return for Season 2?
Read more

iPhone SE deals receive a rare discount with the...

iPhone SE deals rarely get discounted which makes this offer from Amazon all the more impressive.
Read more

CBSN After the Assignment: The Guns of Chicago

Adriana Diaz reveals just how easy it was to find people willing to show off their weapons while reporting on Chicago's gun crisis. In one instance, she was offered to see something much larger than a pistol.
Read more

You've checked out our earlier post on the Best Day Ever at Disney California Adventure park. Now it’s time to hop on over to Disneyland park, where the magic continues!
Read more

The Democratic Party is drunk on spiked progressive Kool-Aid

Arick Wierson and Bradley Honan write that Sen. Joe Manchin isn't the problem -- progressive Democratic politics are. If Democrats are to have continued success as a viable national coalition, they need to maintain a party that is inclusive and welcoming of a…
Read more

Inoke Tonga, a volleyball coach at Valor Christian High School in Denver, wrote in an Instagram post on Sunday that he was forced to resign from his job when school officials learned that he is gay.
Read more

Cuomo’s office opens its own investigation into groping allegations:...

New York Gov. Andrew Cuomo's (D) office has opened its own investigation in response to allegations that Cuomo groped a female aide at the governor's mansion, the ...
Read more

It’s time for Congress to act on WHO reform

Congress can and should take over this process, starting with demanding a better return on our investment and leveraging earmarks to overhaul the WHO. Doing so is about more than just dollars. It's also common sense.
Read more

Strategies to close the pandemic gender gap at work

Covid has pushed many women out of the workforce what practical ideas will entice them back?
Read more

Steve Bannon Convinced Trump to Return to DC for...

What happened to trusting experts?