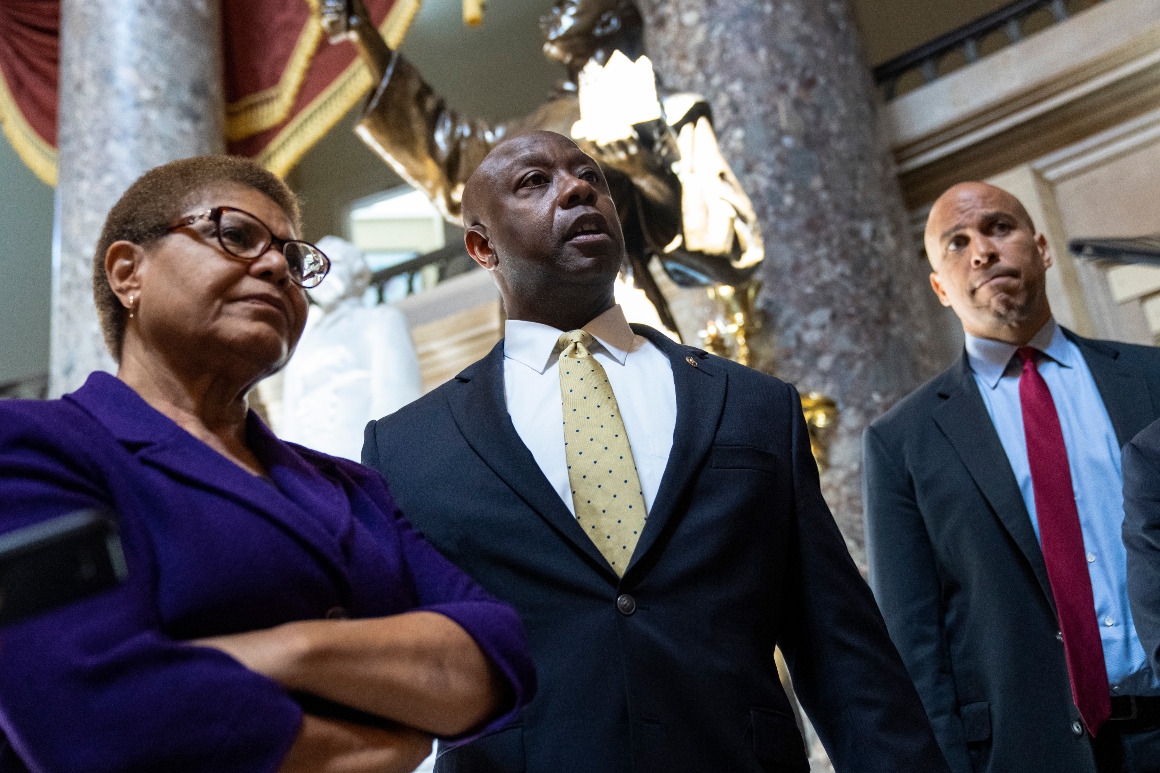 After months of exhausting every possible pathway to a bipartisan deal, it remains out of reach right now, even after working collaboratively with and securing the support of policing groups, Booker said Wednesday. Unfortunately, even with this law enforcement support and further compromises we offered, there was still too wide a gulf with our negotiating partners and we faced significant obstacles to securing a bipartisan deal.

Booker added that the time has come to explore all other options to achieve meaningful and common sense police reform.

The failed bipartisan negotiations almost certainly close the door on police reform this Congress, absent changes to Senate rules. Earlier this year, the House passed a sweeping police reform bill named after George Floyd, a Black man who was killed by a Minneapolis police officer last year. But that legislation has no chance of getting 10 Republican votes in the Senate.

The talks are over. We did the best we could, said Bass, the lead House Democrat negotiator.

The Wall Street Journal was the first to report the end to the police reform discussions. More Deaths Than Births in Michigan in 2020, First Time in More Than 100 Years

‘How I found out my dad was a best-selling...

Sara Faith Alterman was always close to her father. Then she learned he was concealing a secret.
Read more

Welcome to The Hill's Morning Report. Today is Monday! We get you up to speed on the most important developments in politics and policy, plus trends to watch. Alexis Simendinger ...
Read more

The California congresswoman said she is fully vaccinated and received a booster dose and is experiencing "cold-like symptoms."
Read more

"Irreplaceable" gold rosary beads carried by Mary Queen of Scots to her death were among items taken.
Read more

Microsoft has announced that all manner of third party software and storefronts are coming to the Microsoft storefront, and that's awesome.
Read more

Keep eyes on the ball with US–EU trade and...

Technology is at the heart of today’s global competition. This fierce, global competition underscores the value of mutual trust and level playing field. Without trust, investments and innovations will take much longer to materialize.
Read more

China's President Xi Jinping vowed on Saturday to realise peaceful “reunification” with Taiwan, amid rising tensions. He did not mention the use of force.
Read more

Osaka kicks off US Open title defence with straight...

Naomi Osaka overcame a slow start to beat Czech Marie Bouzkova 6-4 6-1 on Monday as the world number three got her U.S. Open title defence under way in front of a roaring capacity crowd.
Read more

Thailand to end quarantine for some vaccinated visitors from...

Human augmentation is a dangerous temptation we are unlikely...

The ability to modify the body with augmentation technology could open up doors we didn’t even know existed.
Read more

Teen Accused of Leaving Newborn in Dumpster Unaware of...

Alexis Avila told detectives in an interview she didn't know she was pregnant until Jan. 6 when she sought medical attention for abdominal pain.
Read more

After failing to raise the debt ceiling through the midterms next year as Democrats planned, the House will follow the Senate's lead and punt it to December.
Read more

One person was killed in a shooting inside a Philadelphia mall, police said.
Read more

Latinos on television shows continue to be underrepresented and creative leaders have said there are systemic and cultural issues preventing real change.
Read more

CNN anchor Chris Cuomo issued an apology to his colleagues after it was reported that he offered political advice to his brother, embattled Democratic New York Gov. Andrew Cuomo, amid his sexual misconduct scandal.
Read more

France had threatened to stop British boats offloading catches at its ports after seizing a trawler.
Read more

Here’s how scientists are using machine learning to listen...

Scientists are using machine learning to listen to sounds made by fish.
Read more

The rise of India’s ‘Covid quack’

An anti-vaccine doctor falsely claims to be able to cure coronavirus, diabetes and Aids through diet alone
Read more

Crystal Palace manager Roy Hodgson says he "wasn't satisfied" by their performance in a 3-1 defeat by Southampton.
Read more

EXPLAINER: What the $65B broadband service plan will do

Something more substantial has to change the calculus between wages, tuition costs, and declining state funding. The post Forgiveness Won’t Solve the Debt Crisis appeared first on The American Conservative.
Read more

Chelsea go level on points with Arsenal at the top of the WSL after a 1-0 away victory over Aston Villa.
Read more

Bloomberg columnist declares DeSantis the ‘pandemic winner’ despite being...

The number of flights from Frankfurt airport is back above 2019 levels, after the U.S. eased restrictions on international visitors.
Read more

Boeing Co. signaled that Chief Executive Officer Dave Calhoun will be around for the long haul to guide the planemaker back from one of the toughest stretches in its century-long history.
Read more

The founders of RightForge hope to help usher in a second internet.  The post Re-Platforming America’s Deplatformed appeared first on The American Conservative.
Read more

China Evergrande: What the company’s debt crisis means for...

The property giant has missed an interest payment deadline, fuelling concerns that it will collapse.
Read more

Southwest’s Rivals Seen as Likely to Follow in Warning...

Not Every Act of Sexual Misconduct Is a Case...

Chris Cuomo's alleged ass-grabbing is miles away from the sort of pervasive hostility and abuse of power that the MeToo movement was formulated to address, but that doesn't make it okay.
Read more

Chadwick Boseman is posthumously nominated for an Oscar

Half a year after his death, Chadwick Boseman was posthumously nominated for an Academy Award on Monday for his final performance in “Ma Rainey’s Black Bottom.”
Read more

Sweden to allow US travelers on June 30

Sweden will allow travelers from the U.S. next week, according to the nation's government. Sweden's Ministry of Justice ...
Read more

As Pentagon prepares to make Covid-19 vaccine mandatory, some...

The messages began pouring into the law office of Joseph Jordan in Killeen, Texas, soon after the Pentagon announced it would seek to make the Covid-19 vaccines mandatory for troops. Service members wanted to know what their options were if they didn't want t…
Read more

Balance of Power: Will We Ever Know Covid-19 Origin?...

One-quarter in Texas unwilling, unlikely to get vaccinated: poll

Almost one-quarter of Texans are unwilling or unlikely to get the COVID-19 vaccine, a new poll from The Dallas Morning...
Read more

Joe Biden says he hopes to find areas where cooperation is in the interests of both the US and Russia.
Read more

Clubhouse is making some big changes to its drop-in audio chat, including an end to requiring phone contacts and starting a program to foster creators.
Read more

Krafton has announced that Battlegrounds Mobile India has amassed over 20 million pre-registrations on the Google Play Store.
Read more

Microsoft doubles down on Windows Subsystem for Linux

On the penultimate day of the Tokyo 2020 Olympics, there's more Scottish interest in the cycling and athletics events.
Read more

Nobel Peace Prize goes to journalists from Philippines and...

Maria Ressa of the Philippines and Dmitry Muratov of Russia were cited for their fight for freedom of expression.
Read more

In his new book "Runner's High," Josiah Hesse delves into the subculture of amateur and elite athletes who use cannabis for exercise.
Read more

Republican Sen. John Kennedy of Louisiana formally launched his 2022 re-election campaign on Tuesday, promising to his constituents that “come hell or high water — your values will be my values, and I will never be silent — never — when the nut jobs tell me t…
Read more

Nick Dietz compiles some of the latest and greatest viral videos, including a newborn miniature horse making his first best friend and Jason Paul and Pasha Petkuns in some brain-baffling parkour action.…
Read more

Brighton give technical director Dan Ashworth permission to speak to Newcastle about their vacant director of football role.
Read more

House Speaker Nancy Pelosi told Democratic colleagues on Tuesday that she is creating a new committee to investigate the Jan. 6 insurrection at the Capitol, according to a person familiar with her remarks.
Read more

Amazon in talks to buy MGM for $9B: report

Amazon is reportedly in talks to buy Metro-Goldwyn-Mayer Studios (MGM) for $9 billion.Citing sources close to the matter, ...
Read more

It will be at least two years before former President Trump will be able to use his Facebook account. The social media company suspended him on January 7 for inciting violence. Mr. Trump said the Facebook decision was an insult to all the people who voted for…
Read more

Ivory Coast, the world’s top cocoa producer, appealed to the European Union for flexibility as the country prepares to comply with the bloc’s proposed sustainability legislation, which could threaten exports of the key chocolate ingredient.
Read more

Once increases in women’s education are accounted for, the gender pay gap change is only 3% since 1995.
Read more

The trade secretary did not confirm or deny whether a Tory Party donor provided the money beforehand.
Read more

Prime Day deals to help get your backyard and...

With Prime Day in full swing, we're seeing deals up to 40% off on patio and outdoor living deals, making today a great time to grab a few essentials before the next get-together.
Read more

The family of Saniyya Dennis is pleading for help in any information that can lead to finding the missing college sophomore.
Read more

Coal Surges to Record as Global Scramble for Energy...

More than 1,200 cases of heart inflammation have been reported in people who received messenger RNA Covid-19 vaccines, according to the Centers for Disease Control and Prevention.
Read more

Websites across the internet were unavailable on Tuesday, including the New York Times, Bloomberg News, Reddit, and the U.K. government, after services from content-delivery network Fastly Inc. went down.
Read more

GE Will Split Into Three Units, Ending Conglomerate for...

U.S and China step to forefront as climate talks...

The pair moved closer to something resembling an agreement on Wednesday, issuing a joint statement of principles for climate cooperation.
Read more

Become an expert bartender with these boozy Black Friday...

There are loads of Black Friday deals on spirits and liqueurs, and we can give you some great mixes to try.
Read more

Kinzinger: Republicans who join ‘America First Caucus’ should be...

Trump Jr. inches past DeSantis as most popular GOP...

The Covid-19 vaccine booster shot proposed by Pfizer Inc. and BioNTech SE should be given to older Americans and those at high risk, a panel of expert advisers to the U.S. Food and Drug Administration said. The move is a setback to a sweeping plan from the Bi…
Read more

Doctor on school reopenings and impact of COVID-19 vaccine hesitancy