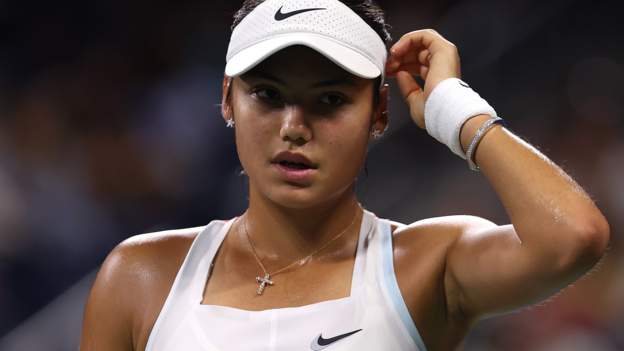 Raducanu is British number one, 10 places ahead of domestic rival Harriet Dart

Raducanu, ranked 77th in the world, broke Wickmayer’s serve three times in a row at the end of the first set to seal the opener.

A cagey second set ended with Raducanu breaking once more, after being taken to deuce in the previous game.

The 19-year-old will play Poland’s world number 51 Magda Linette next.

Victory over Linette would be the first time Raducanu was won three matches in a single tournament since her extraordinary run to the US Open title in September 2021.

The Case for Trading A Russian Arms Dealer for...

Penalties for withdrawing early from your 401(k)

Armed Robbery Staged in Front of FBI Headquarters in...

The Papers: Battle for Kyiv as ‘Russian forces descend’

Rep. Brad Wenstrup: Democrats Want To Have A Problem,...

Medvedev still swinging on grass in golf game with...

Mandeep Singh on the Markets (Radio)

Murder-accused father did not call 999 as baby turned...

Small businesses say they are hurt by rising costs...

Japan is testing a return to tourism

These are the next states that could call special...

Recession-Proof Your Life: What to Do to Protect Your...

Anna Netrebko out of Met Opera over her support...

Ecommerce sales set for huge rise over the next...

One in eight pupils out of school as Covid...

Tunisia’s president says first decision after referendum would be...

Naomi Osaka pulls out of Pan Pacific Open in Tokyo due to...