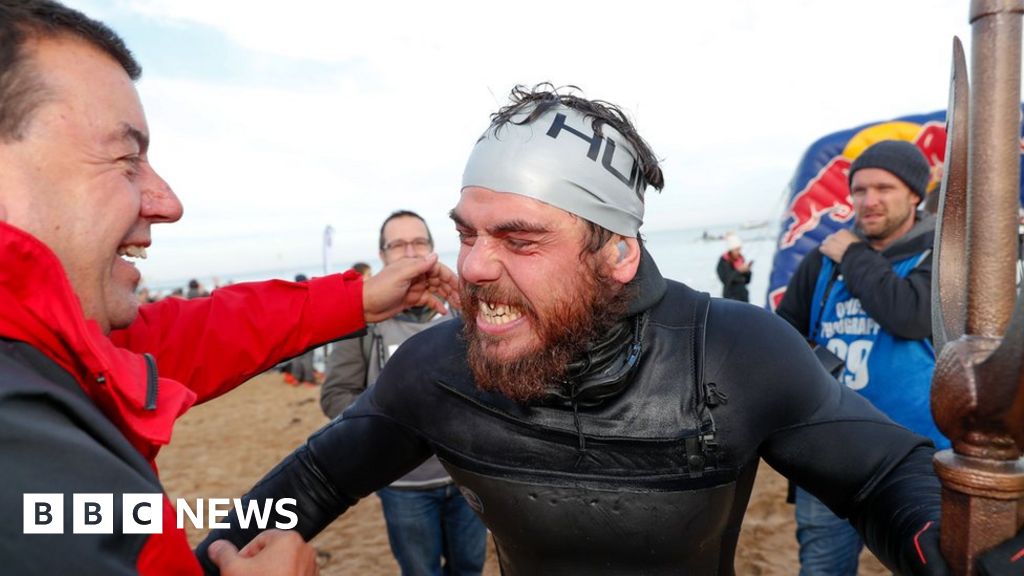 An adventurer from Lincolnshire is attempting to set a record for the world’s longest non-stop swim in Loch Ness in the Scottish Highlands.

He is now bidding to swim 100 miles (160km) in the loch in support of a sea kelp conservation project.

“It’s not just about records” the swimmer said. “There is a much bigger meaning behind this one.”

Image caption, He is attempting to set a record for the world’s longest non-stop swim in Loch Ness

Edgley is making the attempt to raise awareness of the Scottish kelp seaweed forests with support of Skye whisky distillery Talisker and Parley for the Oceans, a non-profit environmental organisation.

“So, hopefully by making a bit of a swimming spectacle of myself – breaking this world record – it can raise awareness for that,” he added.

Edgley has prepared for the non-stop swim, which could take up to 72 hours, by training for up to 12 hours a day in the waters around the Isle of Skye.

He has also consumed around 10,000 calories a day to help his body stay insulated from the cold.

After gaining 10kg, Edgley announced the arrival of the “Ross Ness Monster” on his social media channels.

Talking about the challenge, Edgley told BBC Radio Lincolnshire that although he was allowed a support boat, he was not permitted to touch land or the boat.

The crew were there “just purely to throw bananas at me” during the swim, he said.

“It’s just me and the Loch Ness Monster.”

Cyrill Gutsch, founder & chief executive of Parley for the Oceans, said: “Sea forests are the planet’s underwater architects… that are crucially important for planetary health.

“The collective research by our scientific partners will provide vital evidence to support this process and to ensure kelp forests and their carbon sinks are protected in Scotland and around the world.”

Edgley is already in the Guinness Book of World Records after completing a rope climb the equivalent height of Mount Everest in 19 hours in April 2016.

That was two months after doing a marathon while pulling a car.

But an attempt in 2017 to swim the 24.8 miles between Martinique and St Lucia while pulling a 100lb tree trunk ended in disappointment.

PNC brought on outside firms amid Zelle scrutiny

Free speech concerns mount over DHS ‘disinformation’ board as...

Phillies rally past Astros to open World Series: “They...

Open: This is “Face the Nation,” February 6

Ukraine accuses Russia of shelling nuclear plant and the...

Here’s what’s ticking off travelers more than anything else

Grenfell Tower fire: Contractors slammed for blaming each other

Democrats anxious about 2022 believe they can run on...

US rolls back Trump rule on relations with Palestinians

President Biden hypes up USMNT before their World Cup...

Philippines complains of Chinese fishing ban and ‘harassment’ at...

Pinkett Smith’s hair loss from alopecia at center of...

Thiel’s Palantir Boosts Hiring While Others Are Cutting Jobs

Prosecutors to announce whether charges will be brought in...

How Long Can a Hangover Last? We Asked the...

What time do polls close in your state for...

Gift Guide: a few ideas for the mechanical keyboard...

Plan to cut energy bills if you avoid peak-time...

Warren Buffett Is Back With Berkshire Hathaway’s Biggest Takeover...

Man gets parole after retrial conviction in 1995 killing

More calls for South Africa leader to quit over...