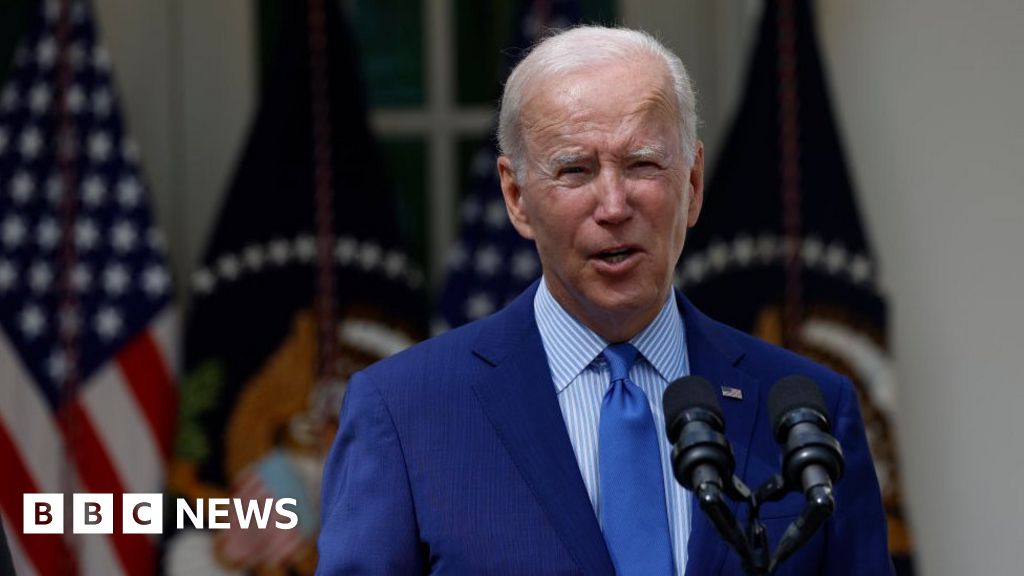 President Joe Biden has declared the pandemic “over” in the US, even as the number of Americans who have died from Covid continues to rise.

Mr Biden said that while “we still have a problem”, the situation is rapidly improving.

Statistics show that over 400 Americans on average are dying from the virus each day.

The head of the World Health Organization (WHO) said last week that the end of the pandemic is “in sight”.

In an interview with 60 Minutes on CBS, Mr Biden said that the US is still doing “a lot of work” to control the virus.

The interview – aired over the weekend – was partly filmed on the floor of the Detroit Auto Show, where the president gestured towards the crowds.

“If you notice, no one’s wearing masks,” he said. “Everybody seems to be in pretty good shape…I think it’s changing.”

In August, US officials extended the ongoing Covid-19 public health emergency, which has been in place since January 2020, through 13 October.

To date, more than one million Americans have died from the pandemic.

Data from Johns Hopkins University shows that the seven-day average of deaths currently stands at over 400, with more than 3,000 dead in the last week.

In January 2021, by comparison, more than 23,000 people were reported dead from the virus over a single week-long span. About 65% of the total US population is considered fully vaccinated.

Public health officials have expressed cautious optimism in recent weeks that the world is edging towards a pandemic recovery but continue to urge people to remain careful.

The US recently authorised new vaccines that match the version of the Omicron variant currently dominant in the country, with federal health officials asking Americans to keep their jabs up-to-date.

On 6 September, White House Covid-19 response coordinator Ashish Jha said it marked an “important shift” in the fight against the virus but underscored the need to “prepare for unforeseen twists and turns”.

Last week, WHO Director-General Tedros Adhanom Ghebreyesus said that the world has “never been in a better position to end the pandemic”.

Covid-19 also continues to have a significant impact on the US economy, with the National Bureau of Economic Research reporting last week that Covid-related disease has slashed the US workforce by approximately 500,000 people.

Mr Biden said he believes that the pandemic has had a “profound” impact on the psyche of Americans.

More than 6.5 million people have died since the beginning of the pandemic around the world. The US has had the highest death toll, followed by India and Brazil.

Amazon warehouse worker will propose reforms at a shareholder...

How WhiteLab Genomics is using AI to aid gene...

NATO in talks to build naval base in Albania,...

Nintendo’s Switch Lite is $10 off for Prime members

Register today for DeFi and the Future of Programmable...

Aggies still in the running for 2023 Quarterback Austin...

Series win over Australia is ‘proof’ to steel England...

Joel Embiid was accidentally called the MVP in a...

Every passenger from China will have to test negative...

Thousands of flights canceled, delayed at start of workweek

Dustin Jacoby had nerves he wasn’t used to before...

How Biden came around to banning Russian gas and...

China ready for ‘closer partnership’ with Russia in energy

Chinese engineer sentenced to 8 years in US prison...

Canada’s Trudeau to use emergency powers to end demonstrations:...

Logitech’s new ‘Pen’ is a rechargeable stylus for classroom...

Twitter, Musk square off in court over bid for...

TotalEnergies denies claim it made fuel for Russian forces

GPU supply no longer the problem for Nvidia –...

Queen Elizabeth II’s coffin is lowered into the royal vault at Windsor...