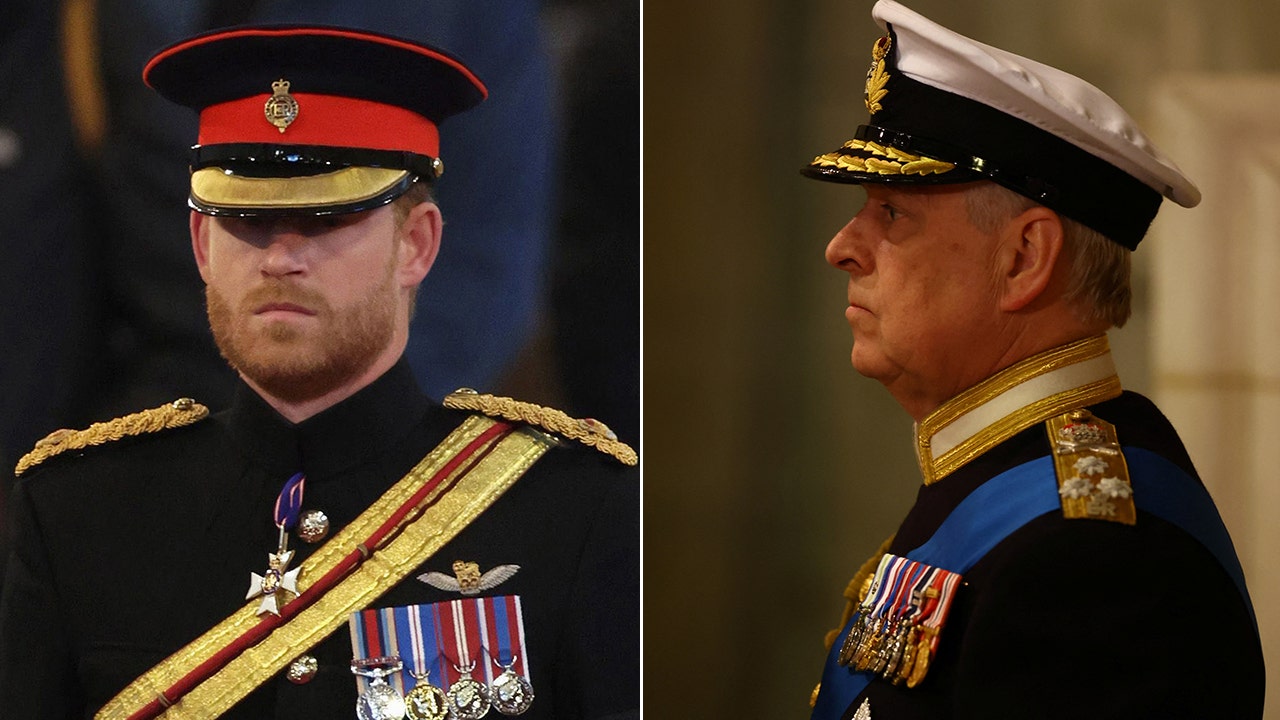 Prince Harry’s military uniform was noticeably different from his brother’s, Prince William, and uncle’s, Prince Andrew, as they each stood vigil over Queen Elizabeth II’s coffin Saturday at Westminster Hall ahead of her funeral on Monday.

The “ER” initials were positioned on the shoulder of Prince William’s uniform, and were also seen on Prince Andrew’s military regalia during another senior royal vigil, which stands for “Elizabeth Regina” in Latin.

Prince Harry was finally allowed to wear his military uniform at the last minute after receiving approval from King Charles III, when Kensington Palace announced the surprise, 15-minute vigil with the Queen’s grandchildren on Friday.

“We do not know why the initials were removed from Prince Harry’s uniform, but I am told that Prince Harry was so distraught over the removal that he seriously contemplated not wearing his uniform during the vigil,” royal expert Kinsey Schofield exclusively told Fox News Digital.

Prince Harry did not have the “ER” logo on his military uniform at Queen Elizabeth II’s vigil, but Prince Andrew did despite neither being working royal family members.

Schofield added, “I’m told he almost wore his morning dress instead. I don’t think instances like this are a personal attack on him, but unfortunately he believes that they are.”

Harry and wife Meghan Markle departed from royal duties and moved to the United States due to what they described as the British media’s intrusion and racist demeanor toward their family.

Prince Harry not wearing the “ER” initials could simply be a royal mishap.

King Charles III, (C) Anne, Princess Royal, (L) Prince Andrew, Duke of York (back) and Edward, Earl of Wessex (R) hold a vigil beside the coffin of their mother, Queen Elizabeth II, as it lies in state on the catafalque in Westminster Hall.

“It could be an oversight,” Duncan Larcombe, Fox News Royal Contributor, said. “It makes no sense.”

The “oversight” is even more questionable given that Prince Andrew, who was stripped of his royal titles and patronages in 2022, was seen wearing the insignia.

Andrew is no longer a senior working royal following the unfolding of his friendship with late sex offender Jeffrey Epstein. The prince was then accused of sexual assault by Virginia Roberts Giuffre, and was banned from using the “HRH” titles.

Despite the announcement made that only working members of the royal family would be allowed to wear military uniforms, an exception was made Friday night for the Duke of York as he stood vigil alongside King Charles III, Princess Anne and Prince Edward with the King’s Body Guard to protect Her Majesty’s coffin.

and the children of Prince Edward, Lady Louise Windsor and Viscount Severn.

“I am glad the king thought better of it,” Shannon Felton Spence told Fox News Digital. “It’s the right thing to do. The queen was immensely proud of Prince Harry’s service, as his granny and as his commander-in-chief.”

Buckingham Palace is otherwise only allowing current working members of the family with military titles to wear uniforms at the funeral.

Two minutes of silence will be observed at the end of Her Majesty’s funeral Monday, giving the British public a chance to pay their final respects to the late monarch. What is Taxonomy eligible?

Capitals’ Ovechkin calls for ‘no more war’ with Ukraine

Elon Musk says a lithium shortage is holding back...

Hinge’s new feature makes it easier for you to...

Sony to Promote CFO Hiroki Totoki to President and...

FTX (FTT) to Have EU Operating License Revoked by...

Australia election: A great shock to the system

Whoopi Goldberg sorry for Holocaust not about race remark

UN chief: World is in `life-or-death struggle’ for survival

FTC says Bezos, Jassy must testify in probe of...

Dear Sophie: What H-1B and other immigration changes can...

Bird flu: Poultry in Norfolk, Suffolk and parts of...

Monstrous asteroid to speed by Earth next week

Adams makes the case for a centrist approach to...

Finance CEOs Fret Over US Consumers Buckling on Inflation,...

First Black mayor of Aurora to run as GOP...

Residents allowed to return to Florida island slammed by...

PNC brought on outside firms amid Zelle scrutiny

Amazon Music Unlimited price is going up a dollar...

Is that a shark? Man films finned creature swimming...

Ingraham: Biden, Democrats going the way of the ‘Dow’...

A new Instagram test removes shopping tab from the...

Samsung might be making your Galaxy S22 run far...