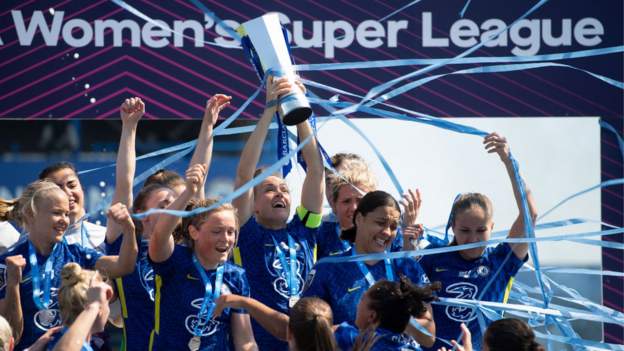 With renewed interest in the game and a new generation of fans created, the Women’s Super League is drawing more attention than ever before.

Whether new to the women’s game or not, fans do not have long to wait for their next fix. The WSL season gets under way this weekend – with 22 games live on the BBC in 2022-23.

What are the key dates?

The WSL season starts on Friday, with Leah Williamson’s Arsenal at home to Brighton at Meadow Park, after the original opening weekend matches were postponed following the death of Queen Elizabeth II.

The BBC will show Aston Villa hosting Chloe Kelly and Lauren Hemp’s Manchester City on Sunday. The match kicks off at Villa Park at 12:30 BST and will be live on BBC Two and BBC iPlayer.

The north London derby between Arsenal and Tottenham – which looks set to break the league’s attendance record – will be broadcast live on BBC One, BBC iPlayer and BBC Sport online.

That match will take place at Emirates Stadium on 24 September, during the men’s international break.

The season runs until 28 May.

Who are the stars to look out for?

Fans of the Lionesses will be spoiled for choice – of the 23 players who were in their Euros-winning squad, 18 will feature in the Women’s Super League.

Of those, 16 play for Manchester City, Manchester United, Arsenal or Chelsea.

Kelly – who scored the winning goal against Germany in the final – and Hemp are among the Manchester City contingent.

However, the team to beat are champions Chelsea, led by last season’s league top scorer Sam Kerr. The Australia striker netted 20 goals in the WSL in 2021-22.

How can I watch games?

All WSL matches are available to watch on the BBC, Sky Sports or the Football Association website.

You can also watch highlights on the Women’s Football Show – the WSL version of Match of the Day – which is broadcast on Sunday nights on BBC One.

The BBC will broadcast one game from each round of matches. Many will be on BBC One or BBC Two – and all those will be on the iPlayer. Sky have rights to two games a week.

Any games not on TV will be available to watch for free on the FA Player.

If you want to attend matches, ticket prices are much more affordable than in the Premier League – and there will be more WSL games played at big stadiums this season too.

Only Leicester and Reading routinely play at the same venue as their men’s teams – but several clubs are planning to move some big fixtures this season.

During the season there will also be a Merseyside derby at Anfield and a Manchester derby at Etihad Stadium – and Arsenal plan to play three WSL games at Emirates Stadium.

In terms of geographical spread, the southernmost WSL team are Brighton, with the Manchester and Merseyside clubs furthest north.

The second-tier Championship has Sunderland and Durham in the North East and Bristol City to the west.

When is the Women’s Champions League?

Arsenal and Chelsea are in this season’s Women’s Champions League. Manchester City also qualified – however their European journey has already ended.

City entered at the first qualifying stage, taking place in Madrid. They beat Tomiris-Turan of Kazakhstan 6-0, but were defeated 1-0 by Real Madrid in the final of their qualifying bracket.

The two-legged second round, when Arsenal enter the competition, takes place in September on a more typical home-and-away basis.

Chelsea have qualified automatically for the group stage, which begins in October. FDA’s agenda in limbo as Biden’s nominee stalls in...

Officials say more areas of US may see mask...

Apple’s quest to kill off the password is heading...

United plots big expansion of flights between US and...

No let-up in hostilities in Ukraine despite prisoner swap

Rugby World Cup: Natasha Hunt to miss out on...

Mortgage demand drops to a 22-year low as higher...

Optus: How a massive data breach has exposed Australia

How San Diego secured its water supply, at a...

Abortion rights protests take place across the US

US agrees to update critical habitat for Florida manatees

Watch Live: Outside witnesses testify on final day of...

Biden signs $40B for Ukraine assistance during Asia trip

Senator Rand Paul: The Tightrope Of The Ukrainian War