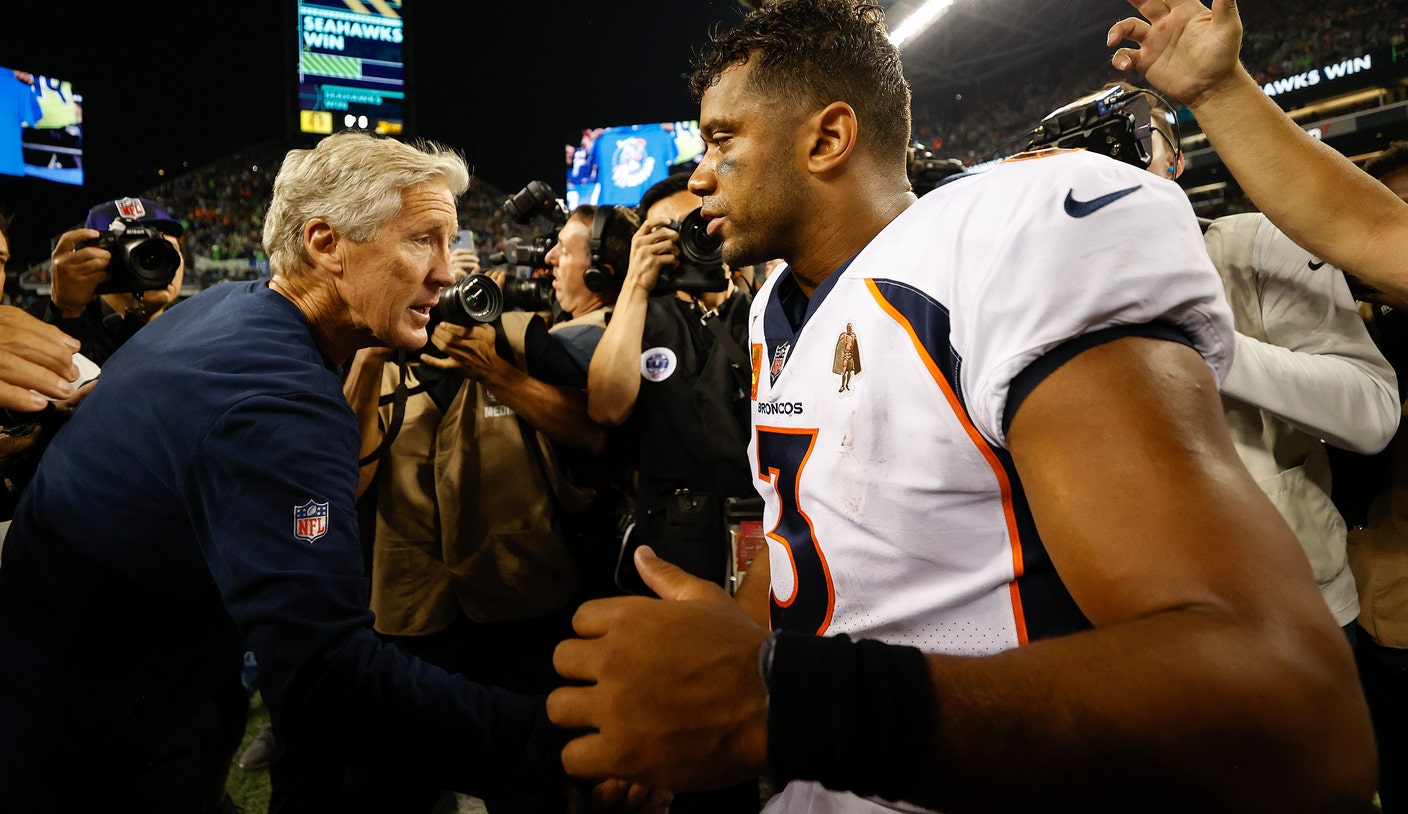 SEATTLE Denver Broncos head coach Nathaniel Hackett chose to take the ball out of the hands of his highly paid quarterback with the game on the line and instead roll the dice on a long-shot, 64-yard field goal by veteran kicker Brandon McManus.

Hackett and the Broncos came up snake eyes, as the McManus kick drifted wide left, giving the Seattle Seahawks a surprising 17-16 win over the Broncos in Russell Wilson’s return to Seattle on Monday Night Football.

The Broncos had the ball on their own 45-yard line with 1:13 left on the clock and all three timeouts. Denver managed to run just three more plays for nine yards before settling for the long field goal instead of going for it on fourth-and-5 from Seattle’s 46-yard line with 20 seconds left.

“I wish we would’ve got a lot closer,” Hackett said. “It put us in that weird spot there because we were in the field-goal range, but we were on that fourth down situation. I Didn’t think we were going to get that many yards, so I thought it was a great job by Javonte (Williams). We just made the decision we wanted to take or shot there on that one.”

Hackett said he told his offense Seattle’s 46-yard line was the mark the Broncos needed to reach in order to try a long field goal, and that gave them the best chance to win.

“I believe in Coach Hackett,” Wilson said. “I believe in what we’re doing. Any time you can try and find a way to make a play on fourth-and-five, that’s great, too. But also, I don’t think it was the wrong decision.”

The numbers did not back up Hackett’s decision.

The 64-yarder would have been tied for second-longest field goal made in NFL history. McManus is 1-for-8 in his NFL career on attempts 60 yards or longer. He’s played his entire career with the Broncos, benefiting from the high altitude in Denver in half his games.

Seahawks head coach Pete Carroll even acknowledged proverbially raising his eyebrows at the Broncos choosing to kick the field goal, instead of entrusting the game into his former quarterback’s hands.

“I was surprised that they took Russ out there at the end,” Carroll said. “We weren’t thinking field goal there. We were thinking fourth down and they were still going. That gave us a chance to win the game there, and we were fortunate that he didn’t make the kick.”

Seahawks edge rusher Uchenna Nwosu said what others may have been thinking about the situation.

“Once they brought out that field goal unit, I was like, OK’, because Russell is a dangerous person, especially in short yardage,” Nwosu said. “He can make a lot of things happen. When they took him out of the game and brought the field goal unit out, I was like OK, maybe they don’t trust him in that situation’.

Wilson finished 29-of-43 for 340 yards, with a touchdown pass and no interceptions. He was sacked once and posted a 101.3 passer rating.

The Broncos held a 433-253 total yards advantage but fell woefully short in other aspects of the game.

Denver finished with 12 accepted penalties for 106 yards, with a handful of those defensive gaffes extending drives for Seattle. And the Broncos had the ball four times in the red zone, including three times inside Seattle’s 10-yard line, but only had six points to show for it. Both Melvin Gordon and Javonte Williams fumbled near the goal line, with Seattle defensive back Michael Jackson recovering both.

Wilson and the Broncos were booed from the time he took the field for pre-game warm-ups until the final drive, as Seattle fans let him have it throughout the game.

Wilson’s replacement Geno Smith had his best game as a pro in recent memory, receiving chants of “Geno” from the crowd.

Smith engineered a six-play, 70-yard scoring drive to open the game, and the Seahawks never trailed from there. The key play featured Smith scrambling to escape pressure, drawing Denver’s secondary in and finding an uncovered Will Dissly for a 38-yard touchdown. The Seahawks took a 7-0 lead with 11:26 left in the first quarter.

Smith completed his first 13 passes before his first miss, a high pass over the head of Rashaad Penny out in the flat. Smith finished 23-of-28 for 195 yards, with two touchdown passes and no interceptions, posting a 119.5 passer rating.

“I know what I have inside of me,” Smith said, when asked about those who doubted his ability. “God has blessed me with talent and a passion and a drive. As far as worrying about naysayers or anything like that, I don’t get into that type of stuff.

“People can write you off, but life is about what you make it. I’ve just been blessed enough to be in the NFL for ten years and been working my butt off.”

The scene was set for a memorable Wilson performance. Playing for the first time as a pro for the Denver Broncos against his former team, Wilson exchanged pleasantries with former players like Marshawn Lynch as well as some Seattle coaches during pre-game warm-ups.

Wilson said he ignored the noise.

“For me personally, I didn’t waver,” Wilson said, while wearing a pale green tuxedo in his post-game press conference. “They may cheer for you. They may boo you. They’ll love you one day and hate you the next. That’s sports. But at the end of the day, I’m going to keep competing. I’m going to keep battling.”

Asked if the win validated anything regarding Wilson’s trade to Denver, Carroll had this to say.

“I don’t feel like that,” Carroll said. “I’m just glad we won the football game. I don’t feel like validation after that. You all might think I should have been, with all that’s been talked about and all that. Really, we had a great process to get ready for this game, and these guys played hard the whole time. They played smart the whole time. That’s the kind of football we have to play.”

Champions League: Will Rangers be unpredictable curiosity against Liverpool?

Reliance, Ola Electric, others to get incentives under India’s...

YouTube’s Super Thanks tipping is now available to partners...

The economy’s got ‘one foot in the grave,’ JPMorgan...

Spain responsible for violence against woman in C-section case,...

Pools and gyms at risk without further support

Cold War 2 With China and Russia Is Becoming...

What a circular economy means for sustainable fashion

What Glossier got wrong

Musk Drives Even Some Twitter Founders to Mastodon (Podcast)

Garbage and recyclables pile up as omicron takes its...

Timeline: The legal battle over the 11,000 documents found...

Charles to be officially proclaimed king at royal ceremony

Suspect at large after shooting at University of Virginia,...

How to save for retirement when you’re in your...

A Piece of the Queen: New Souvenirs Mark the Monarch's Death