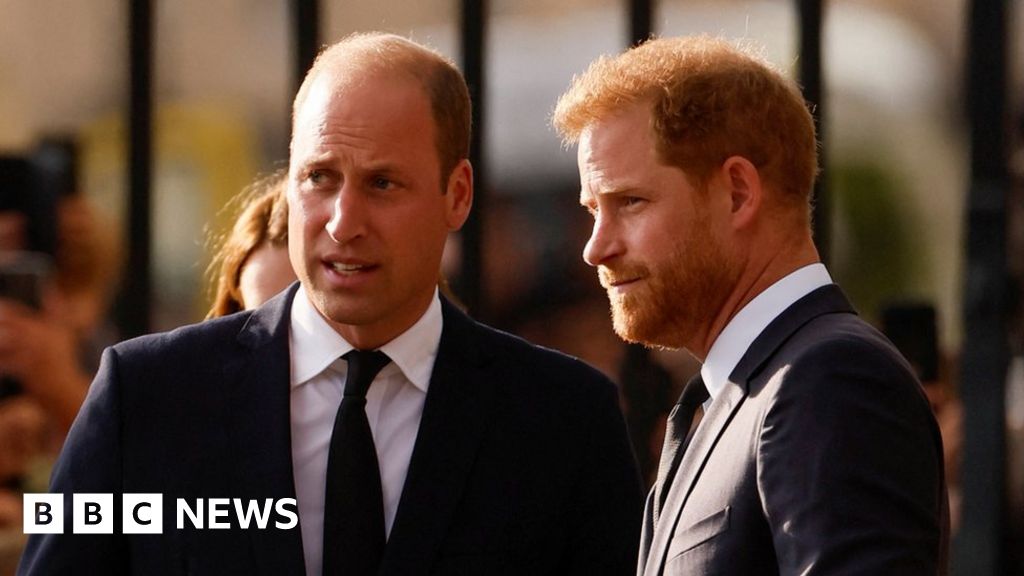 Prince William and Prince Harry will walk together behind the Queen’s coffin in a procession in London on Wednesday.

The brothers, along with the King, will follow the coffin on foot from Buckingham Palace to Westminster Hall, where the Queen will lie in state.

The procession will leave the palace at 14:22 BST and is expected to arrive at Westminster Hall at 15:00 BST.

A service lasting about 20 minutes will then be led by the Archbishop of Canterbury.

Camilla, the Queen Consort, and Catherine, the Princess of Wales, will travel by car, as will Sophie, the Countess of Wessex, and Meghan, the Duchess of Sussex.

It comes after Prince William and Prince Harry, accompanied by their wives, appeared in front of crowds gathered outside Windsor Castle on Saturday.

The group arrived in the same car and spent around 40 minutes greeting mourners and looking at flowers left for their grandmother.

It was the first time the brothers had been seen alongside one another in public since the funeral of their grandfather, the Duke of Edinburgh, in April last year.

Both were at a service of thanksgiving in St Paul’s Cathedral during the Platinum Jubilee celebrations in June, but sat on opposite sides of the cathedral.

Image caption, The brothers appeared together to greet mourners outside Windsor Castle following the Queen’s death

The King spoke warmly of Harry and Meghan in his televised address to the nation on Friday evening.

After announcing that William and Kate would become Prince and Princess of Wales, he said: “I want also to express my love for Harry and Meghan as they continue to build their lives overseas.”

In a tribute to the Queen released on Monday, Harry also said he wanted to “honour my father in his new role as King Charles III”.

Mourners have already begun queueing to attend the Queen’s lying-in-state at Westminster Hall.

It starts at 17:00 BST on Wednesday and concludes at 06:30 BST on Monday, the morning of the Queen’s funeral.

Government guidance says the queue is expected to be very long, with people standing for “many hours, possibly overnight” and with very little opportunity to sit down.

Games like GTA to play while waiting for GTA...

Amazon’s new role-playing game can help you build your...

Sony’s New Flagship TV Is a Pleasure to Watch—and...

Two killed and others injured in Gonalston crash

Dollar firm as markets brace for another big Fed...

Biden to promise quick action on codifying Roe if...

Rashford had right answer to being dropped – Ten...

The Disney+ app for PS5 finally supports 4K and...

Railroad workers hopeful Biden will act to give workers...

Logitech’s latest webcams might help you raise your remote...

Why egg prices are soaring

Zero Trust has seen an explosion in popularity

Australia PM tests positive for COVID, to work from...

Focusing on the rural side of USDA

Medals, mementos from Colin Powell estate go up for...

Bills have one of NFL’s worst running games. How...