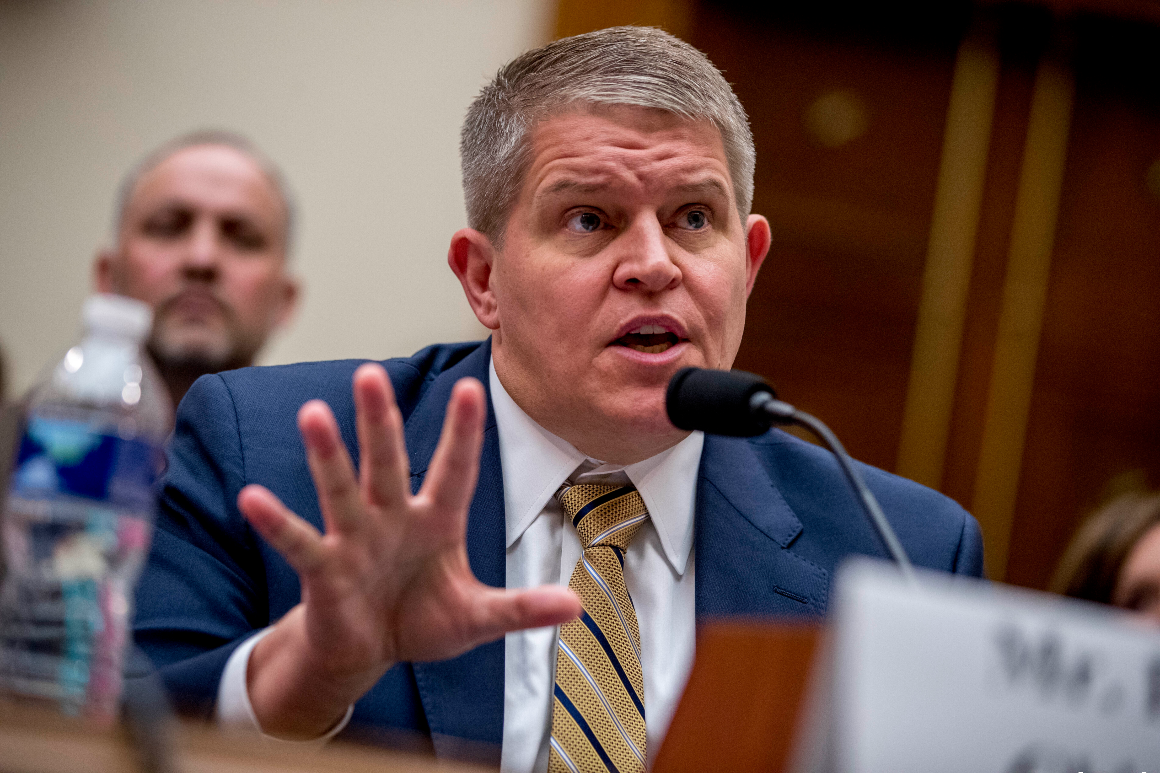 The White House is planning to withdraw David Chipman’s nomination to lead the Bureau of Alcohol, Tobacco and Firearms, according to three sources close to the process.

Chipman is currently a senior policy advisor to Giffords, a gun control group, and faced an uphill battle to Senate confirmation as President Joe Biden’s point person on firearms regulation. Sen. Angus King (I-Maine) had previously told the Biden administration and Senate Democrats that he was not supportive of the nominee. Other moderate Democratic senators, including Joe Manchin of West Virginia and Jon Tester of Montana, have also remained noncommittal on the pick.

Chipman, meanwhile, faced universal opposition from Senate Republicans. Senate Minority Leader Mitch McConnell described the nominee as an “anti-gun extremist” and asked for the White House to withdraw his nomination.

Bennifer stepped out looking as happy as could be for a date night in Beverly Hills.
Read more

Android 12 is here, but it shouldn’t be  TechRadar
Read more

The Nikon Z9 is now official, but there's still a lot we don't know about the full-frame flagship. Luckily, our in-depth analysis is here to fill the gaps.
Read more

Montrealers will soon be able to dine at restaurants again, stay out as late as they wish, and visit one another under Quebec’s plans to lift some of the continent’s toughest Covid-19 restrictions.
Read more

Actual Authoritarianism Has Been Working Its Way Through The...

Seventy-two percent of business leaders say they are concerned that U.S. democracy is under threat, according to a Morning Consult poll of 400 company executives released on the one-year anniversary of the Capitol riot.The survey, commissioned by...
Read more

The EufyCam 2 Pro is a home security camera system that records in 2K, but how does it compare to rivals from Arlo and Ring?
Read more

Amazon PS5 restock surprise is here – when and...

The Amazon PS5 restock has finally happened. Here's how to buy the PS5 Disc and PS5 Digital Edition overdue at the US retailer.
Read more

Commuters are describing a chaotic and scary scene overnight after a Northern California train flew off the tracks. The accident sent a train car into a rushing creek in a section of the San Francisco Bay area. A tree downed during a storm is blamed for knock…
Read more

McConnell sidesteps Trump calling him ‘dumb son of a...

How to participate in Taps Across America with CBS...

A baseball card collector is making cards in the likenesses of famous but under appreciated Negro League players, and hopes Major League Baseball renames its Most Valuable Player trophies after a legend whose skin color kept him out of the big leagues.
Read more

The Motorola Moto Edge 20 will launch in India with a 7.1mm thickness, 165g weight, a 4,000mAh battery and a mid-range chipset.
Read more

‘We’ve done everything we can’: South Lake Tahoe begins...

“I’m 81 years old and I said, ‘Do I have to start over?’” a retired postal worker and South Lake Tahoe resident said. “I didn’t eat for three or four days until I realized I hadn’t eaten."
Read more

Greek authorities have begun moving asylum-seekers living in a squalid camp on the island of Samos into a new facility on the island, where access will be more strictly controlled
Read more

Jesse Watters exposes corruption in Washington: Voters are getting...

Jesse Watters said Washington is "corrupt to the bone" and voters are getting "hosed" Saturday on "Watters' World."
Read more

An Indiana man is facing federal charges in the death of a police officer outside an FBI building in Terre Haute, Ind.The ...
Read more

Activists sentenced to prison in Hong Kong for unauthorized...

Simple ways to stop advertisers from following you online

We all know that prickling feeling when we see an ad online or on our phone for something we just talked about with a friend.
Read more

Some "pop-up" COVID-19 testing sites in Illinois have turned out to be fake, with the likely goal of trying to fraudulently obtain people's personal information, the state attorney general's office warned this week.
Read more

Defender Aaron Wan-Bissaka pleads guilty to driving while disqualified, without a licence and insurance.
Read more

It’s taken 30 days and a lot of ‘space origami’ for the James Webb Space Telescope to unfold and reach its destination. Now the science begins.
Read more

How Maci Faced Her ‘Biggest Fear’ On Teen Mom...

Maci was able to overcome her 'biggest fear' during 'Teen Mom OG': She visited the gas station, where six months prior she was in the middle of a shooting.
Read more

Reels, Rosebud and R2-D2: The academy museum is set...

The United Nations is expected to announce, in a landmark report, that reducing methane emissions must play a larger role in preventing the worst effects of climate change, ...
Read more

Car gets smashed driving through a ram fight

Nick Dietz compiles some of the latest and greatest viral videos, including a Toyota damaged in a scuffle between sheep and a tiny bird tapping its way to Internet stardom. To see these videos in their …
Read more

The House select committee investigating the Capitol insurrection is cranking up the pace ahead of Thursday's anniversary of the mob attack, training its sights on ex-Vice President Mike Pence and Donald Trump's top Fox News booster Sean Hannity.
Read more

Frank Benzimra on the Markets (Radio)

The 47th G-7 summit is set to commence today in the United Kingdom.
Read more

UnitedHealth Group Inc. expects the drag from Covid-19 to diminish in 2022 and said the surge of delta variant cases during the summer...
Read more

Pennsylvania is requiring state health and prison workers to get fully vaccinated or undergo coronavirus testing on a weekly basis.The requirement was announced at a press conference Tuesday by D...
Read more

The European Commission says that most member states will have a sufficient coronavirus vaccine supply to reach herd immunity by the end of June, according to a memo circulated to national delegations i...
Read more

Blinken calls on Cuba to respect rights ahead of...

Secretary of State Antony Blinken urged Cuba to "reject violence, and instead, embrace this historic opportunity to listen to the voices of their people" ahead of planned protests against the Communist regime on Mon...
Read more

The AI researcher, who left Google last year, says the incentives around AI research are all wrong.
Read more

A Kentucky home for retired racehorses

Since 2003, the non-profit Old Friends has provided a retirement home for aging equines, founded by a former film critic whose love of horses drew him to gamble on a new vocation, which is paying out in unexpected ways.
Read more

Kamala Harris cites not getting ‘out of DC more’...

A historic neighborhood threatened by plans for a sports arena, a bodega that became a hub for Dominicans in Rhode Island and a park where Mexican American students gathered to call for equitable access to education.
Read more

Since its launch in 2017, the #MeToo movement has experienced some fits and starts
Read more

Two state lawmakers in Minnesota are drafting legislation to rename part of a state highway in honor of Prince, the Minnesota-born music superstar who died in 2016....
Read more

For years, North Korean defectors have resorted to an underground network of brokers to call and send money to their families in North Korea
Read more

Sens. Elizabeth Warren of Massachusetts and Cory Booker of New Jersey say they have tested positive for COVID-19
Read more

Congress must stop the march toward war with China

Next Africa: The Terrible Cost of Vaccine Inequality

Welcome to Next Africa, a weekly newsletter of where the continent stands now — and where it’s going next.
Read more

How To Understand the Inflation We’re Seeing Now (Podcast)

President Biden to lay out six-step plan to tackle...

President Biden will outline the new phase of the nation's fight against the coronavirus this week. Weijia Jiang has more on his plan to slow the spread of the Delta variant and boost vaccination rates. Then, Dr. Sejal Hathi, a physician and faculty member at…
Read more

Biden to extend freeze on student loan payments until...

The pandemic relief, which suspends monthly loan payments and interest for 40 million Americans, had been set to expire at the end of September.
Read more

At least six people died when a towering slab of rock broke from a cliff and toppled onto boaters drifting near a waterfall on a Brazilian lake Saturday, officials said.
Read more

Judges appointed by former President Trump have stymied President Biden's policies on multiple fronts in the early months of the new administration, taking what experts say is a less "deferential" approach to executive power as judges appointed by past presid…
Read more

iPad Air 4 drops to lowest price yet in...

iPad deals are seeing particularly strong discounts this week, with a record low price on the Air 4.
Read more

Mayflower: Ship to sail across Atlantic without a crew

The autonomous craft will travel 3,500 miles (5,630km) from Plymouth, UK to Massachusetts in the US.
Read more

Tucker Carlson: Someone is lying about the Afghanistan debacle

Tucker Carlson reacts to Milley testifying in the U.S. Senate, and reveals the only person who has been fired over the situation in Afghanistan.
Read more

The Biden administration on Friday said that it still needs more time to determine its position in a lawsuit over House Democrats' request for former President Trump's tax returns.The Democratic-led Ways and Means...
Read more

Even After a Boom Year, It’s Hard to Hold...

The industry is as volatile as ever.
Read more

Natural COVID-19 immunity is powerful — but kind of...

Here's why it seems that scientists are ignoring natural immunity.
Read more

Tomi Lahren: Cuban protests should remind Dems that ‘no...

Fox Nation host Tomi Lahren said Tuesday that the Cuban protests should serve as a “reminder to all the Democratic-socialist wannabes out there” that “no one flees to socialism and communism, only from it.”
Read more

SpaceX to launch 4 astronauts to ISS on recycled...

In The Heights Is A Sueñito Come True For...

Bronx-born singer Leslie Grace makes her big-screen debut in movie musical 'In the Heights.' She told MTV News what's like to have that dream come true.
Read more

Covid: Presenter’s death due to vaccine complications, and a...

Capt. Jay Baker of the Cherokee County Sheriff's Office is facing backlash for the way he described the Georgia shooter who killed eight people on Tuesday night.
Read more

The longtime partner of late Capitol Police officer Brian Sicknick says former President Trump "needs to be in prison" for his contribution to the events that took place on Jan. 6.Asked by "PBS N...
Read more

What is a COVID-19 vaccine ‘breakthrough’ case?

Tower Hamlets: How do you vaccinate a London borough?

Lebara is offering a 2GB of data SIM plan for less than...