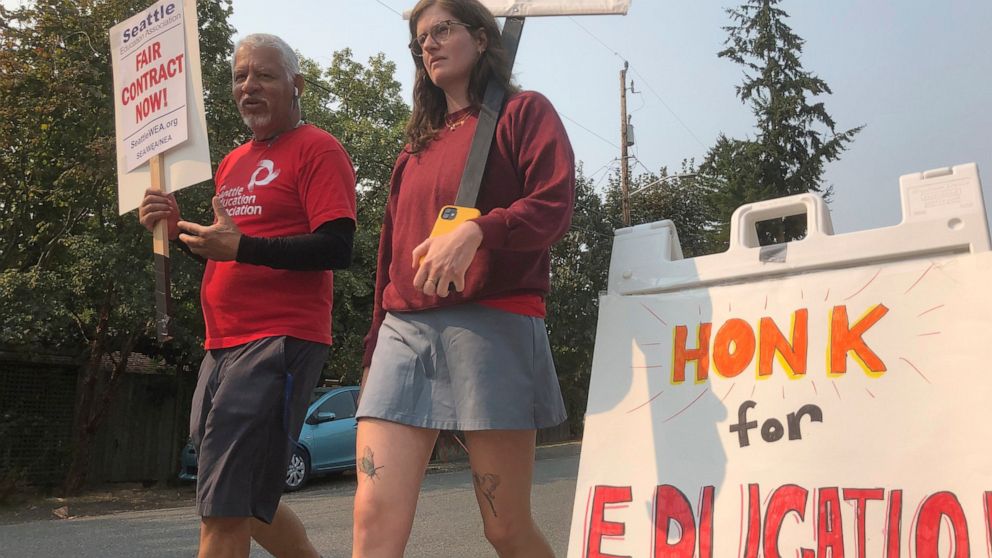 SEATTLE — On the third day of a teacher strike in Seattle on Friday, picketing staff members at Hazel Wolf K-8 compared their stats. Some had logged 35,000 steps. Jessica Thomashow, a third-grade teacher, noted that she’d walked the equivalent of a half-marathon each day.

The first day was rough, said Carrie Widener, a special education teacher. You can’t imagine what it does to your body to walk up and down the sidewalk for eight hours. But your body adjusts, and we feel strongly about what we’re doing.”

The strike over issues that include class size, support for special education students and those who are learning English, and pay has delayed the start of school since Wednesday for some 49,000 students.

But Superintendent Brent Jones said in a video message to families Friday that Seattle Public Schools and the Seattle Education Association had made tremendous progress toward ending it. The sides were prepared to bargain through the weekend, and a decision on whether to begin classes Monday was expected over the weekend.

We agree on the what, the fundamentals: adequate support, safe environments and high quality instruction, Jones said. We want the same things. Our ongoing negotiations are about how we achieve that support, safety and quality.

Districts around the country have faced labor challenges as the pandemic put extraordinary stress on teachers and students alike. An infusion of federal stimulus money has helped stabilize school district budgets, and teachers unions have sought to improve pay, resources and working conditions after a difficult few years.

Many districts, though, have fretted about using short-term funding to pay for long-term costs, such as increased salaries.

In Seattle, teachers have seen healthy raises since their last strike in 2015, with many making more than $100,000, thanks largely to a new state education funding model. The union has said it is primarily focused on winning raises for its lower-paid members, including instructional assistants and front office staff. Paraeducators in Seattle Public Schools start at $19 an hour nowhere near enough to afford to live in the city, many say.

Picketing teachers have stressed that their main concern is educational and emotional help for students, especially those with special needs or learning difficulties. The union said 95% of its voting members approved the strike.

Seattle Public Schools has sought to increase the amount of time disabled children spend in general education classrooms, and also to eliminate ratios dictating how many students may be assigned to each special education professional. The district says that would allow it to focus on student needs rather than fixed staffing ratios, but teachers worry it would mean less support, higher case-loads and less time to spend with each student.

In his video message, Jones said he recognized the pandemic had made the jobs of educators more complex and demanding. The district is working toward a contract that will add social workers to middle and high schools, provide intensive support for first-year teachers, move away from a special education model that disproportionately impacts students of color, and offer meaningful raises for paraeducators, instructional assistants and teachers.

Will Hershman teaches fourth grade at Northgate Elementary, which has a large number of students with high needs including immigrant students who don’t speak English and students who have suffered trauma such as homelessness.

When you’re trying to meet the needs of your class, however big it is, if you have to focus on one child with very high needs, the other students who need attention aren’t getting that, he said. Even without any changes, it’s really impossible. But if you introduce more high-needs students into the classroom with less support, that problem becomes even more pronounced.

Holly Bryant-Morehead, a special education teacher at Northgate, said she was paid a stipend last year for having 23 students five more than the approved ratio.

But, she added, I’d rather have extra support for the kids than the money.

Niantic is laying off about 90 employees and canceling...

WHO: COVID “getting worse, not better” in North Korea

Thai court to rule if Prayuth has overstayed PM’s...

Checking In On ETFs

Irish Trade With Northern Ireland Surged in 2021 After...

Actress Anne Heche ‘not expected to survive’ after crashing...

School absence pupils to be helped rather then punished

An experimental new attack can steal data from air-gapped...

Tunisian party says will not recognise any deal with...

5 quick tips to give your Sony OLED TV...

Firms will close this winter without help, warns business...

County Championship: Essex in control against Yorkshire with Joe...

Learn how to recession proof your startup and more...

Nikolas Cruz had large bag and was nervous, Uber...

We have 100 days to election when America can...

How are official state symbols chosen? Which ones has...

This popular open-source web server has some serious security...

Testing the power and luxury of the Lucid Air...

Google’s next Android phone could land a lot sooner...

Rocket booster bursts into flames at SpaceX plant during...

Trump returns to the scene of his tarnished legacy

US Navy sends its most advanced surface warship to...

Mikio Kumada on the Markets (Radio)

Here’s What Happens When Countries Use Bikes to Fight...

DC men who allegedly posed as federal agents under...

A New World of Work is Revealed (Podcast)

Elizabeth II: The Queen on screen - nine shows to watch