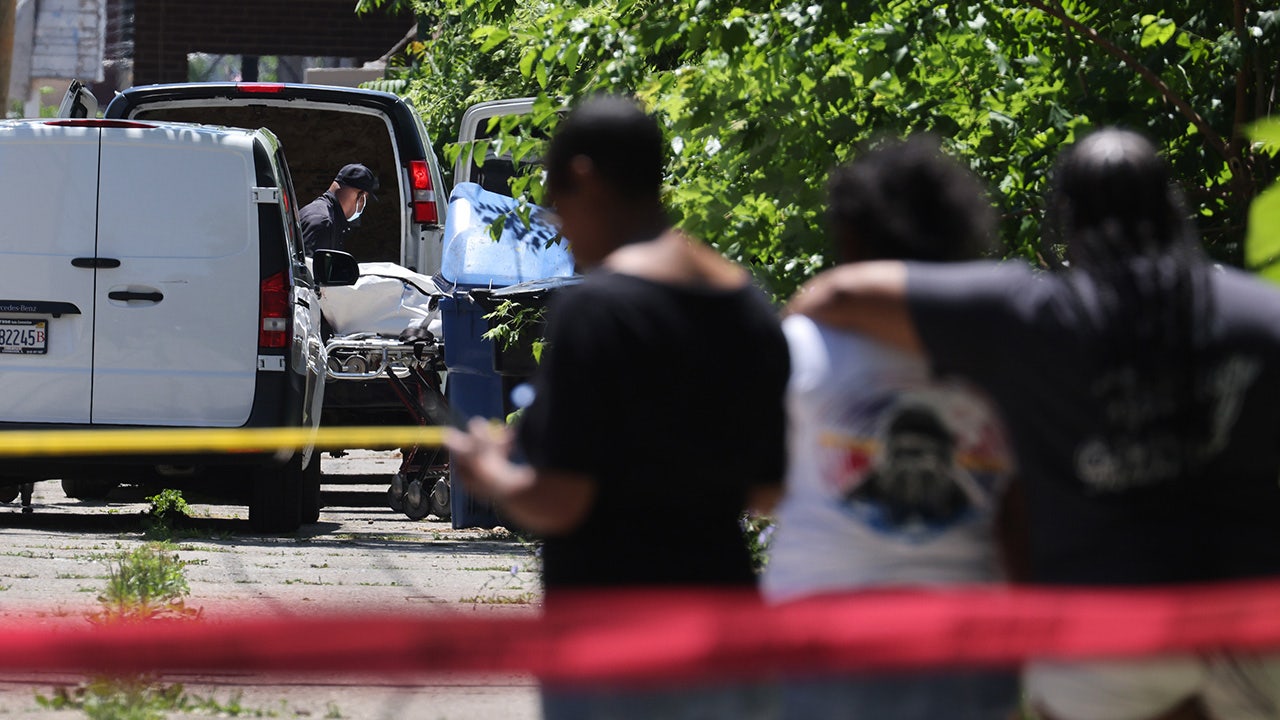 A 12-year-old boy and a 15-year-old girl were wounded in a drive-by shooting on Chicago’s West Side Saturday afternoon, according to the Chicago Police Department.

The two kids were walking out of a business around 3:23 p.m. when a car approached and two gunmen fired multiple shots from inside the vehicle, according to authorities.

The 12-year-old boy received a graze wound to his hip while the 15-year-old girl was struck in the calf and ankle. Both of them were transported to a local hospital in good condition.

Later, a 25-year-old man transported himself to a local hospital with multiple gunshot wounds and was also listed in good condition.

The suspects fled and no arrests have been made.

Seven shootings on Saturday left a dozen people wounded in Chicago, according to the police department. Shootings are up 9% so far this year compared to the same time frame in 2020. Ex-U.S. Marine Trevor Reed's family says if anything happens to him, they "will hold the Russian Government entirely responsible."
Read more

(AP) -- Southern California is about to embark on a coaching search that will cast a shadow over the entire college football season.
Read more

Borders Railway extension to Carlisle would be ‘best solution’

Extending the Borders Railway to Carlisle would be the "best solution" to solve connectivity issues, say councils.
Read more

Viewpoint: France’s President Macron doesn’t get the impact of...

The French president may not be able to repair relations with Algerians, argues writer Maher Mezahi.
Read more

President Joe Biden couldn’t get everything he wanted into his own $1.8 trillion families plan
Read more

The owner of Kay Jewelers, Jared and Zales is setting a big sales target as business starts to pick up again after a turbulent year.
Read more

Teachers in Chester, Pennsylvania, are beginning school without knowing when they will get paid. The school district is $22 million dollars in the red and is currently unable to pay the teachers. CBS News correspondent Jericka Duncan reports
Read more

Nubya Garcia: The British sax star who is jazzing...

T20 World Cup cricket on ESPN Plus: what can...

Catch all the cricket action from the other side of the world with our guide to watching T20 World Cup on ESPN Plus.
Read more

A report has laid bare a few upcoming foldable phones, all of which will apparently use ultra-thin glass displays.
Read more

U.S. hiring probably accelerated last month, a range of high-frequency indicators suggests, as the effects of the latest COVID-19 surge began to subside, but even a second straight weakemployment report would be unlikely to derail the Federal Reserve's plans …
Read more

India could bar transactions in crypto, permit holding as...

India is likely to bar the use of cryptocurrencies for transactions or making payments, but allow them to be held as assets like gold, shares or bonds, the Economic Times reported on Wednesday.
Read more

What’s in Democrats’ Build Back Better plan? A lot...

Policy ideas are popular, but more know about the cost of the bill than about its plans.
Read more

Kacey Musgraves performed 'Star-Crossed' live for the first time at the 2021 MTV Video Music Awards, and she really set the scene.
Read more

US allows extra COVID vaccine doses for some. Now...

Tyler Gilbert is just the fourth pitcher ever to throw a no-hitter in his first big league start.
Read more

When Hillary Clinton and Donald Trump debated in St. Louis, Missouri, there were many heated moments. At times, the audience couldn't contain its reaction. These are the moments that had social media talking.
Read more

The Federal Aviation Administration (FAA) announced on Wednesday that it has closed its investigation into Virgin Group founder Richard Branson's July flight to space.Earlier this month, the FAA said it was ...
Read more

SpaceX counted down Wednesday toward a nighttime launch of four astronauts who have been grounded for nearly two weeks by weather and medical delays.
Read more

We're here to help you find the best Black Friday portable monitor deals and know what you need to look for.
Read more

In 1905, the high court made a fateful ruling with eerie parallels to today: One person’s liberty can’t trump everyone else’s.
Read more

A grand jury Friday indicted Isaiah Stokes, 41, on charges of second-degree murder and criminal possession of a weapon in the death of Tyrone Jones, 37, of Queens Village.
Read more

Hispanic Catholics are in the spotlight as President Biden navigates difficult waters following a vote by U.S.-based bishops to advance an effort to deny Holy Communion to politicians who support abortion rights.Wh...
Read more

This poll should set off alarm bells for Senate...

There have been a few constants over the past 40 or so years in Iowa: the butter cow at the state fair, the dominance of the University of Iowa's wrestling team and Chuck Grassley.
Read more

Specialized trucks circled Miami Beach on Tuesday morning spreading BTI, bacteria that attacks mosquito larvae but is safe for humans. But residents there are concerned that authorities might turn to Naled, a controversial insecticide that has been banned fro…
Read more

As his team gets ready to play in the FA Cup preliminary round, Trafford forward Astley Mulholland speaks about his defibrillator campaign following the loss of his brother.
Read more

The Asian Development Bank aims to have the plan ready for the COP26 climate conference in November.
Read more

Presented by The American Petroleum Institute What can Congress finish cooking by Thanksgiving on Capitol Hill? Lets take a look at whats simmering in...
Read more

When President Thabo Mbeki came to power in South Africa in 1999, the country was gripped by an HIV-Aids epidemic - and the president's decision to question scientific evidence, and reject the use of life-saving drugs only made the situation even more dire. B…
Read more

The National Hurricane Center said the storm is expected to weaken as it moves across Cuba on Monday.
Read more

Ariel Henry fires his chief prosecutor after attempt to charge him over killing of president in July. Also: Europe tries to avoid winter Covid and cows trained where to pee.
Read more

Goats being used to prevent wildfires in California

Landowners are turning to an unusual technique to help prevent fires from growing in California. Goats have now joined the firefighting efforts.
Read more

Trump offers to back Katko challenger after impeachment vote

Former President Trump is offering to back a primary challenger to Rep. John Katko (R-N.Y.) after Katko voted to impeach Trump.Trump sent the letter to the chairman of the Onondaga County Conserv...
Read more

The governments of nearly two dozen countries signaled their support on Tuesday for a treaty that would declare the health of humans, animals and the planet to be connected and call on member nations to collaborate to add...
Read more

FBI vs. Clinton rattles markets, and other MoneyWatch headlines

Chip and Joanna Gaines celebrated the launch of their Magnolia Network over the weekend with an elaborate feast in New York City.
Read more

CNN anchor Don Lemon cannot quit Donald Trump even after he urged the rest of the media to do so.
Read more

Diogo Jota rekindles Liverpool's Premier League top-four hopes with the winning goal on his return to Molineux in a game that ends with a worrying head injury to Wolves goalkeeper Rui Patricio.
Read more

All three defendants in Arbery case found guilty of...

A jury in the state of Georgia on Wednesday found all three defendants charged in the death of Ahmaud Arbery guilty on counts of murder.  The jury found Travis McMichael, the defendant who fatall...
Read more

Sen. Elizabeth Warren (D-Mass.) called Friday for the Senate Armed Services Committee to investigate a 2019 airstrike in Baghuz, Syria that killed 70 people, including dozens of women and children.In a letter to pa...
Read more

Thousands of people are evacuated following some of the worst border fighting in years.
Read more

Majority of small business owners back vaccine mandates for...

A majority of small business owners support COVID-19 vaccine mandates for their employees, a poll from the U.S. Chamber of Commerce and MetLife found, as debates over the controversial issue heat up across the count...
Read more

World Superbikes: Razgatlioglu level with Rea in championship after...

Match of the Day pundit Danny Murphy praises a "remarkable" winning goal from Liverpool goalkeeper in their 2-1 Premier League win over West Brom at the Hawthorns.
Read more

US must re-engage in trade

As the global community becomes more close-knit, it is critical for the Biden administration to re-engage our country in international trade with a long-term vision that benefits American workers and consumers.
Read more

President Obama and his daughters headed out for some holiday shopping on "Small Business Saturday," visiting Politics and Prose, a bookstore in Northwest Washington, D.C.
Read more

Data of Me – Elijah Wood Explores His Impact...

What kind of impact has Elijah Wood had on the internet? WIRED combs the web for data about Elijah and presents all the information to him. Elijah delves deep into The Lord of the Rings, Animal Crossing, Paula Abdul, The Hobbit and more. NO MAN OF GOD is In …
Read more

Amazon Driver Warns New Homeowners Their House Is Not...

The advice was captured via Jessica Huseman's doorbell camera, and warned the homeowner of a potential cause for safety concern with her house.
Read more

Can Western brands recover from consumer backlash in China?

Some foreign companies are facing a boycott in China - they are not the first and won't be the last.
Read more

Japan's government is communicating closely with the Bank of Japan on responses to issues ranging from climate change to the coronavirus pandemic, Finance Minister Taro Aso said on Tuesday.
Read more

Father of slain Marine: ‘Biden turned his back on...

The father of a U.S. marine who was killed in the suicide bombing at Kabul's airport says President Biden "turned his back" on his son.
Read more

Ingraham: Biden administration is ‘losing control’ of its COVID-19...

Slovakia’s new government, which was created after a political crisis triggered by a secret deal to buy Russia’s Sputnik V coronavirus vaccine, has won a mandatory confidence vote in Parliament
Read more

Birmingham Phoenix's Liam Livingstone is run out by an incredible direct hit from the boundary from Southern Brave's Tim David during a thrilling final of the Hundred at Lord's.
Read more

As executive chef and co-owner of three popular Philadelphia restaurants – Osteria, Amis, and Alla Spina – Jeff Michaud’s story is a prime example of what can happen when you follow your dreams. Michaud shares his ultimate dish on “CBS This Morning: Saturday.”
Read more

Scotland’s seventh drowning victim in a week dies in...

The 34-year-old was rescued from Loch Lubnaig on Sunday afternoon after getting into difficulty but later died.
Read more

In the largest Afghan enclave in the US, frustration,...

Judge Jeanine: Joe Biden has given a terrorist organization their own nation