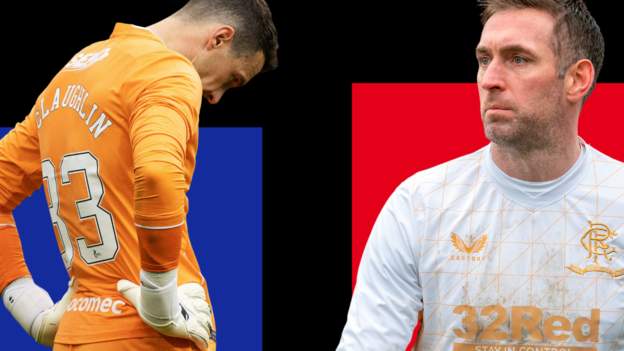 A surprise final-minute cameo in last season’s Scottish Cup final looked like the last Rangers fans would see of Allan McGregor – but the announcement of a one-year contract extension a month later delayed his seemingly inevitable retirement.

While the 40-year-old’s playing days remain active, the goalkeeper has been picked for selection just once this term – a League Cup victory over Queen of the South – after being demoted to second choice.

But after an unconvincing display from Jon McLaughlin in Saturday’s Old Firm drubbing at Celtic Park, calls are growing for McGregor to be reinstated as number one.

‘Van Bronckhorst has decision to make’

Unlike outfield positions, the unforgiving goalkeeping spot has a cruel nature of punishing any error, given the player between the sticks is the last line of defence.

It can be a lonely place, which must be acknowledged when noting any keeper’s failings, but doubts have grown since McLaughlin’s promotion to first choice this term.

Last month, the former Hearts custodian was vocal on how he feels “pressure and scrutiny is maybe greater in my position with the man I’m playing ahead of”. Unfortunately for the 34-year-old, performances like Saturday’s will only exacerbate that.

The Scotland cap was also criticised for his role in Joel Nouble’s opening-day goal at Livingston, then was questioned for failing to keep out Teddy Teuma’s strike for Union Saint-Gilloise in a Champions League qualifier three days later.

McLaughlin did, however, pull off a vital stop in Belgium with Rangers trailing 2-0. Failing to keep out Dante Vanzeir’s one-on-one effort would have had Rangers chasing a three-goal deficit, and may have ended their Champions League hopes.

Assured performances in last season’s Scottish Cup semi-final success over Celtic and away to PSV Eindhoven last month, which helped secure a place in the Champions League groups, must also be noted.

But Saturday’s humiliating derby defeat has proven to be the tipping point for some after McLaughlin twice failed to get enough behind Liel Abada strikes, was beaten by Jota’s delicate dink, and passed straight to David Turnbull for Celtic’s fourth.

The question now is whether it will also serve as a breaking point for his manager, or whether he will remain loyal.

“It’s a difficult [situation]. I think McGregor would have saved a couple of the Celtic goals on Saturday,” said former Rangers forward Neil McCann on Sportscene.

“For the fourth Celtic goal, it is a pass McLaughlin is changing his mind about while he is in the motion. If you’re playing out from the back, you have to work on it. It looked like Rangers hadn’t worked on it.”

McGregor’s form since returning to Ibrox in 2018 has been integral to Rangers’ recent domestic and European success.

In 2020-21, he was part of a title-winning backline that conceded a record-breaking 13 goals throughout the 38-game Premiership season.

But the former Hull City goalkeeper has not been immune to criticism after seeing his domestic form take a dip last term. On average, McGregor conceded every 243 minutes in Rangers’ title-winning campaign – that was slashed to 104 last season.

The former Scotland international’s save percentage also dropped – from 85% to 66% – with 15 Premiership keepers boasting a better record.

McGregor reserved his top form for Europe, though, as the Ibrox side reached the Europa League final in Seville, proving he is still more than capable at the top level.

His save percentage almost doubled – from 40% to 73% – while his minutes-per-goal-concession average rose from 54 to 88.

Considering nine of McGregor’s 15 European games were in the knockout stage against high-calibre opposition, those are very encouraging numbers for a keeper of any age.

With Rangers travelling to Amsterdam to face Ajax in their Champions League group-stage opener on Wednesday, perhaps the European stage may be the perfect time to recall him.

“Giovanni has a few decisions to make, and one of them is in the nets,” former Rangers striker Kris Boyd – and McGregor’s long-standing team-mate – said on Sky Sports.

“You need big players. You need players that are going to stand up and be characters at this moment. He might just have to put McGregor back in goals.” The Crime Of Giorgia Meloni? Noticing

On the Money — Yellen highlights wealth gap in...

Members of the ‘People’s Convoy’ given Capitol tour by...

Man charged with murder in death of missing teen...

California to ban sales of petrol-only vehicles by 2035

Summers Is ‘Offended’ by Business Lobbying That Took Out...

Texas delivers a mixed message to the left

Stunning details you might have missed from Thursday’s Jan....

Should you get a reverse mortgage?

US Labor Market: Everyone Is Quitting Their Jobs Even...

What is Wordle and why does Countdown’s Susie Dent...

Drink-driving suspect was looking for Donald Trump at RAF...

Indonesia will not increase subsidised fuel prices in Q3...

‘I was chased by skinheads when I arrived in...

Rocket man fights Russian demand to send him back

Pentagon approves request for National Guard deployment ahead of...

Man City apologise to Liverpool for fan chanting over...

Apple Begins to Show Rare Vulnerability Ahead of Economic...