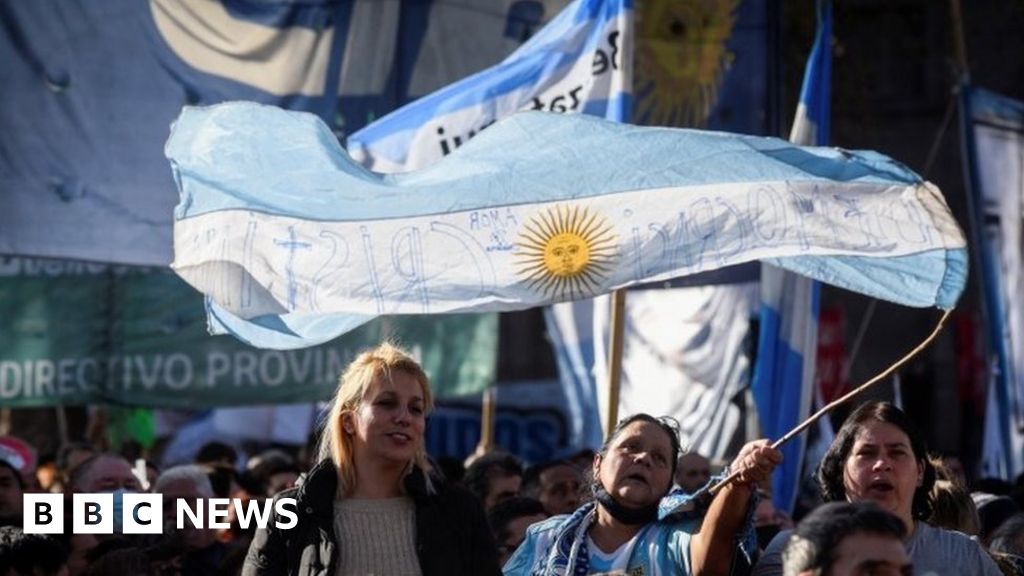 Thousands of supporters of Argentina’s vice-president have rallied to denounce political violence, after she narrowly survived an assassination attempt.

“We are all Cristina,” chanted crowds in the capital Buenos Aires, referring to Cristina Fernández de Kirchner.

The 69-year-old escaped unharmed on Thursday evening after a gunman’s weapon jammed as he aimed at her.

Ms Fernández de Kirchner has not spoken publicly about it yet, but waved to supporters as she left home on Friday.

Footage shows the moment she found herself face-to-face with the loaded weapon.

Ms Fernández de Kirchner was outside her home in Buenos Aires, surrounded by a mob of supporters who back her in her fight against corruption charges.

As she greets them, the gun can be seen emerging from the crowd. She initially appears confused by what is going on, ducking down to retrieve an object dropped on the floor.

Video’s from other angles show people in the crowd appearing to try to block her from the suspected gunman, who came within inches of the politician.

Argentina’s President Alberto Fernández has revealed the gun was loaded with five bullets, but failed to fire when triggered.

He declared Friday a national holiday to allow Argentines time to “express themselves in defence of life, democracy and in solidarity with the vice-president”.

A career politician, Cristina Fernández de Kirchner was Argentina’s president from 2007 to 2015, and its first lady for four years before that. She has been the vice president since 2019.

Police named the suspect as 35-year-old Fernando Andrés Sabag Montiel, Brazilian-born but with an Argentine mother, who has lived in Argentina since he came to the country as a child in 1993. He had previously been arrested in 2021 while carrying a 35cm knife.

Pictures of him taken from his social media posts and published on Argentine news websites depicted him with tattoos associated with neo-Nazi groups.

Authorities are working to establish a motive for the attack on the left-leaning politician.

Image caption, Cristina Fernández de Kirchner waves to supporters as she leaves her home on Friday, escorted by security agents

President Fernández said the attempt on Ms Fernández de Kirchner’s life was one of the “most serious” incidents since the country returned to democracy in 1983.

Crowds of people have been gathering outside her home in Buenos Aires for the past few nights in a show of support, as she fights charges of defrauding the state and being involved in a scheme to divert public funds while she was president.

If convicted at trial, prosecutors have asked that she face 12 years in prison and a lifetime ban from politics.

However, Ms Fernández de Kirchner is the Senate president and so enjoys parliamentary immunity. She would not be imprisoned unless her sentence was ratified by the country’s Supreme Court, or she loses her Senate seat at the next elections at the end of 2023.

Ms Fernández de Kirchner has faced numerous other corruption trials following her time as president. The verdict of this trial is expected to take some months.

Carl Tannenbaum on the Markets

How Microsoft Learned to Stop Worrying and Love Video...

Before he escaped with his jailer, the Alabama fugitive...

Who Owns All the Bitcoin? Those Who Got Into...

7 killed in landslides in El Salvador after days...

Has Claudio Ranieri made any impact at Watford to...

‘Nobody is coming to save us’: Florida Dems struggle...

Dollar bruised after U.S. inflation comes in below expectations...

How much do home security systems cost?

How to become a data scientist at a Big...

Rushdie off ventilator and able to speak

‘Making the Cut’ Store: Where and How to Buy...

Naming your organization in GTA Online is way cooler...

Biden gets praise, criticism for calling Russia’s actions in...

Ukraine’s natural environment is another casualty of war. The...

Tuuli McCully on the Markets (Radio)

Have a tiny dance in Dolby Atmos as Elton...

NBC not sending announcers to the Beijing 2022 Olympics

‘Join us in California’: Newsom targets GOP in Florida...