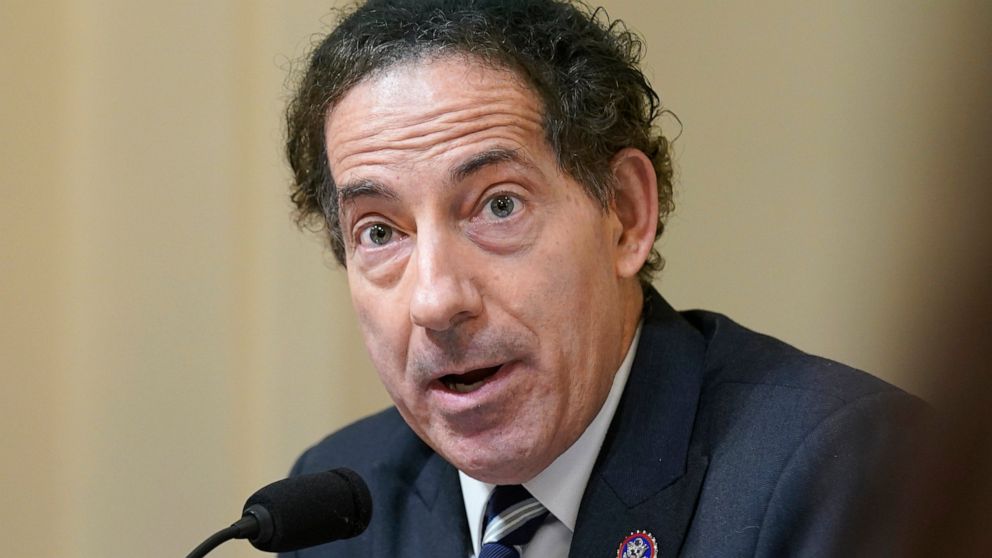 NEW YORK — U.S. Rep. Jamie Raskin of Maryland is working on a memoir in which he will reflect on the Jan. 6 siege of the Capitol and the tragedy he suffered a week earlier when his 25-year-old son Tommy killed himself.

The book is called Unthinkable: Trauma, Truth, and the Trials of American Democracy, which Harper will publish Jan. 4, 2022.

I wrote Unthinkable as a way to make sense of two traumatic events in my life,” Raskin, 58, said in a statement Wednesday. “This book is a labor of love written to capture the dazzling life of a brilliant young man in crisis, who we lost forever, and the struggle to defend a beautiful nation in crisis, a democracy that we still have the chance to save.

Raskin, a Democrat and former constitutional law professor, helped draft articles of impeachment against President Donald Trump for his alleged encouragement of the violent mob and led the impeachment prosecution in the Senate. The Democratic-run House of Representatives voted to impeach Trump, who was acquitted by the Republican-led Senate.

The riot at the Capitol took place as lawmakers were certifying Joe Bidens Electoral College victory over Trump. During those proceedings, Raskin stood to argue against Trumps baseless claims of fraud but also to thank all my dear, beloved colleagues for all your love and tenderness, which my family will never forget. He received a lengthy standing ovation.

As the Supreme Court has long held, Americans do not have a constitutional right to harm their fellow citizens by refusing vaccines and serving as disease vectors.
Read more

DubBot takes an AI approach to web accessibility that gets results but misses the mark in some key areas.
Read more

Lisa Napoli's history of National Public Radio tells the stories of four trailblazing journalists who brought unique perspectives to the microphone, as they fought sexism in politics and on the air.
Read more

‘Down the drain’: Millions face eviction after Biden lets...

The federal eviction moratorium in place since September is set to expire Saturday, after the Biden administration refused to extend it and Democrats in Congress couldn't muster the votes to intervene.
Read more

What policy makers say about economic inequality at this month’s Jackson Hole symposium is potentially a bigger deal for bond investors than any taper talk, according to one market veteran.
Read more

Study nixes life in clouds of Venus, but maybe...

The bipartisan infrastructure bill would end a tax break Congress crafted to help businesses struggling during the pandemic but relatively few companies have claimed.
Read more

The standard of English rugby league on the international stage has been criticised by Jermaine McGillvary, who said the quality has "decline"
Read more

Kaveh Rad, who has made 38 appearances for the academy since 2019, moves up from Sporting KC II, where his twin brother is under contract.
Read more

Paul Ellis, who had both his legs amputated in 2008, says the support of passers-by kept him going.
Read more

Firefighters are working to quash new fires ignited by lightning after thunderstorms with mostly small but welcome amounts of rain rumbled across drought-stricken Northern California, where forests have been burning for weeks
Read more

Gov. Newsom calls GOP rivals ‘anti-vax,’ but are they?

California Democratic Gov. Gavin Newsom has been attacking his Republican rivals as “anti-vax” as he looks to keep his job in a recall election
Read more

Arkansas governor implores people to get vaccinated as COVID-19...

Arkansas Gov. Asa Hutchinson (R) on Saturday implored residents to get vaccinated as COVID-19 cases rise in the state."The overwhelming majority of COVID patients in the hospital have not been va...
Read more

Has the anonymous author of the infamous Circleville letters...

A sinister story has gripped part of Ohio for decades with small-town intrigue, a flood of threatening letters, a booby trap and an attempted murder.
Read more

AP source: No cutting players because they are unvaccinated

An NFL team can’t release a player simply because he is not vaccinated for COVID-19, a person with direct knowledge of the league's directive told The Associated Press on Friday.
Read more

Gottlieb says Pfizer COVID-19 vaccine could be approved for...

Scott Gottlieb, the former commissioner of the Food and Drug Administration, said the Pfizer-BioNTech vaccine could be approved for children by early winter.Gottlieb, who is on Pfizer's board of direct...
Read more

Authorities said Sunday that at least 31 people were killed when a Philippines Air Force plane crashed on landing, including at least 29 army soldiers and two civilians who were on the ground. Vi...
Read more

Case files, photographs and other records documenting the investigation into the infamous slayings of three civil rights workers in Mississippi are now open to the public for the first time
Read more

Why Some Bitcoiners Don’t Care About Changing the Infrastructure...

Not many people would have guessed that the big, bipartisan infrastructure bill — a key priority for President Joe Biden — would be thrown into a tizzy over an amendment regarding crypto-industry taxation.  And yet here we are. At issue is not the attempt at …
Read more

This week, sits down with Formula One Reporter Will Buxton to discuss all things motorsports.
Read more

Britney Spears eviscerated her more than decade-long conservatorship, saying she's been "traumatized" and left in "shock" by it in scorching remarks to a judge on Wednesday.The "Toxic" singer was heard via a remote...
Read more

A "refreshed" Naomi Osaka says it was "nerve-wracking" to compete in the Olympics in her home country of Japan after her first-round win.
Read more

Europe's top court on Tuesday affirmed the power of national data regulators to pursue cases against major tech companies even if they have their headquarters elsewhere on the continent.The EU Court of Justice's ru...
Read more

Your Weekend Reading: The FDA, Biogen and the Failure...

Kamala Harris stops at Pearl Harbor on way back...

Kamala Harris returned to the U.S. on Thursday, landing in Hawaii after her trip to Singapore and Vietnam. But the vice president ignored reporters’ questions – whether about Afghanistan or other topics – as she got off Air Force Two for a stop at Joint Base …
Read more

What’s happening in Tonga is a microcosm of China’s expanding global influence and why the United States is losing ground fast.
Read more

McAuliffe and Youngkin spar over Covid vaccine requirements in...

Virginia gubernatorial candidates Terry McAuliffe and Glenn Youngkin sparred on Thursday over what each would do in the fight against the coronavirus, revealing a significant divide between the Democrat's backing of vaccine mandates and the Republican's argum…
Read more

Gary Dugan on the Markets (Radio)

President Biden spoke with Turkish President Recep Tayyip Erdogan for the first time as commander-in-chief on Friday amid reports that the White House is expected to formally declare that the massacre of roughly a million...
Read more

George Russell accuses Valtteri Bottas of lacking respect for the dangers of Formula 1 after crashing in the Emilia Romagna Grand Prix.
Read more

Finance ministers and central bankers from the world’s biggest economies plan to warn that coronavirus variants present continued risks to growth even as the overall outlook brightens, according to a draft communique seen by Bloomberg News.
Read more

We Turned Afghanistan Into an Opium Den

The country's economy has become dependent on the same drugs that are now killing Americans. This is our real legacy there. The post We Turned Afghanistan Into an Opium Den appeared first on The American Conservative.
Read more

Alan Hutton: Rangers’ Nathan Patterson should go to the...

Nathan Patterson can be the first-choice right-back for both Rangers and Scotland for years to come - but his time for international football is now.
Read more

Businesses can now access a quantum computer from the GCO marketplace.
Read more

Borders Bill: Post-Brexit overhaul of asylum rules to be...

There’s lots to like about the SoundMAGIC P23BT, particularly the price tag of these Bluetooth headphones.
Read more

Oppo A53 price in India slashed, now starts at...

As attorneys in the trial of a former Minneapolis police officer charged in George Floyd’s death screen potential jurors, they’re on guard for anything that suggests jurors would help, or hurt, their side
Read more

Israeli Prime Minister Benjamin Netanyahu has defended police action against Palestinian protesters after two nights of clashes in Jerusalem. He said Israel would "not allow any radical element to undermine the calm" in the city. Also in the programme: Scotl…
Read more

Brian Vendig on the Markets (Radio)

New Zealand captain Kane Williamson won the toss and elected to field against India in the final of the inaugural World Test Championship (WTC) at the Ageas Bowl on Saturday.
Read more

Sen. Lindsey Graham (R-S.C.) said on Wednesday that he opposes a short-term debt hike being hashed out by Senate leadership, and that Republicans shouldn't be "held hostage" to concerns that Democrats could change the fil...
Read more

Goldman Reveals Its Black Workforce Numbers for the First...

Inside Goldman Sachs Group Inc., 1,548 U.S. executives, senior officials and managers run the bank. Of that group, 24 are Black men and 25 are Black women.
Read more

Ariana Grande joining ‘The Voice’ for season 21 as...

“The Voice” is switching their positions for Ariana Grande: the pop star is taking her seat in the coach’s chair later this year
Read more

Top US commander to exit Afghanistan amid Taliban surge

The top U.S. commander in Afghanistan is handing over his authority at a ceremony as America winds down its 20-year military presence and Taliban insurgents continue to gain territory across the country
Read more

In his new mystery, “The Guide,” author Peter Heller pulls off a rare balancing act once again
Read more

A murder inquiry was launched after the body of a 45-year-old man was found in a flat in April.
Read more

Miami Beach to undergo increase in police presence after...

The mayor of Miami Beach announced on Friday that the city would see an increased police presence following a fatal shooting at a restaurant that occurred more than a week ago.A tourist from Colo...
Read more

Danny Briggs hits 20 in an over off Somerset's Jack Brooks to claim a fourth batting point and swing the title race Warwickshire's way.
Read more

The former Israeli Defence Minister Naftali Bennett says he will take his far-right Yamina party into a coalition government with opposition leader Yair Lapid, whose centrist party came second to Mr Netanyahu's party in elections in March. Also in the prog…
Read more

Experts are expressing skepticism over a video showing a San Diego County sheriff's deputy fainting while making an arrest and being exposed to the powerful drug.
Read more

Motorola will add a new budget phone under the E series, the Moto E40. The device comes with a 90Hz display, a 48MP camera, and more.
Read more

Calvin Johnson’s Hall of Fame career with the Detroit Lions lasted shorter than he wanted it to.
Read more

British Prime Minister Boris Johnson is expected to address parliament and hold a news conference on Tuesday about how to manage COVID-19 through the winter, a BBC reporter said on Saturday.
Read more