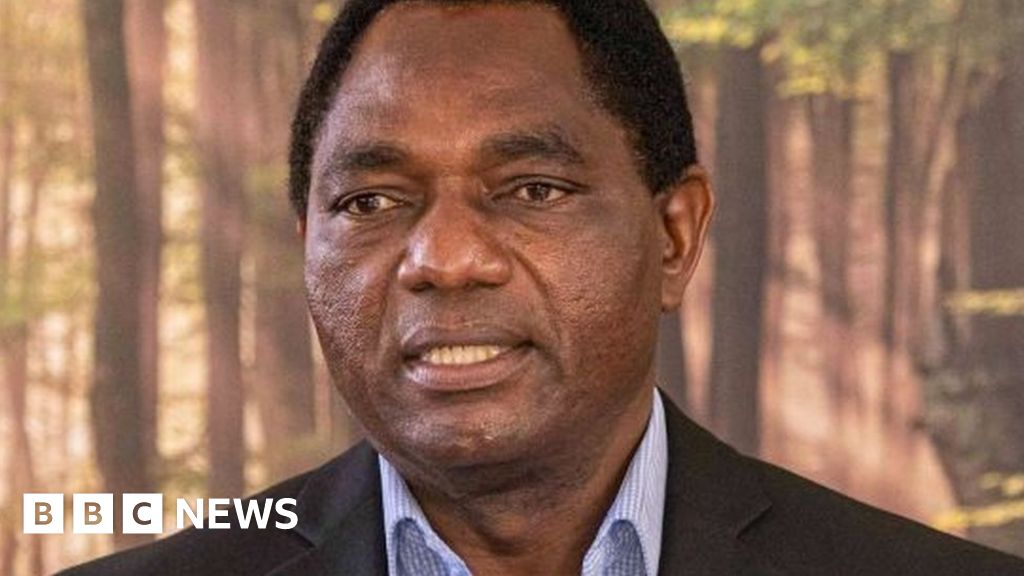 Zambia’s new president has told the BBC his government has detected “horrifying” levels of corruption since taking office just over a week ago.

“People are still trying to make last-minute movements of funds, which are unauthorised, which are not theirs,” President Hakainde Hichilema said.

Mr Hichelema did not name any officials. Mr Lungu has previously denied all wrongdoing.

Mr Lungu governed the copper-rich nation since 2015. He was widely praised for the smooth transition of power to Mr Hichilema, who won the presidency after five failed attempts.

Mr Hichilema won the election on a promise to tackle corruption, and to end the financial and economic crisis that has seen Zambia’s debt ballooning.

In the BBC interview, the new president described the treasury as “literally empty”.

He added that the “hole is much bigger than we expected” and the debt situation had not been “fully disclosed” by the former government.

He added that his government would show “zero tolerance” towards corruption, and would get to the bottom of what he called the illicit movement of funds very soon.

“I don’t want to pre-empt things but what we are picking [up] is horrifying,” the president said.

“You’ll feel nobody can do a thing like that but it’s being done. People have done it. They are still trying to do things now.”

“Unless we do something to the budget, then the budget will be mainly for paying salaries and also servicing debt,” Mr Musokotwane was quoted by Reuters news agency as saying soon after his appointment.

It spends at least 30% of its revenue on interest payments, according to credit ratings firm S&P Global.

Last year, Zambia missed an interest repayment, making it the first African country to default on a loan during the pandemic.

It is also facing difficulties repaying other loans. The 20-year-old admits beaching the Communications Act with a spate of false alerts in Moray.
Read more

When Jon Gruden returned to the Raiders back in 2018 he was greeted with a pep rally news conference, owner Mark Davis calling it a “dream come true” and the “biggest day of his life.”
Read more

A Texas man who told CNN he waited for "a lit bit over six hours" at a polling center in Houston to participate in Super Tuesday last year was arrested and charged this week with two counts of illegal voting.
Read more

President Biden and congressional Democrats are close to finalizing their much anticipated infrastructure bill. Negotiations are expected to continue into the weekend in an effort to scale back the plan and determine how to pay for it. Christina Ruffini has m…
Read more

Trump looks like he’ll run to reclaim the presidency...

Analysis: Former President Donald Trump is making all of the moves of a candidate. The question isn't so much when he'll start campaigning but whether he'll stop.
Read more

Your Evening Briefing: How to Help Ease the Supply...

The international community should work on a treaty for pandemic preparedness after the global Covid-19 outbreak exposed weaknesses in the system, according to an article signed by world leaders.
Read more

Energy Prices: Winter Is Coming and Europe Is Running...

Major chocolate traders in Ivory Coast are failing to pay a $400-per-tonne premium on beans aimed at curbing farmer poverty, the country's cocoa regulator said in a draft letter seen by Reuters on Friday.
Read more

Indian shares were largely unchanged on Wednesday, as gains in automakers and Hero MotoCorp were offset by losses in heavyweight information technology stocks.
Read more

Paul Van Doren, who co-founded Vans shoes in 1966, has died at age 90. He took control of the company in the '80s and helped it become a California icon.
Read more

Can Wall Street’s bulls keep climbing a ‘wall of...

Taliban speak out after taking over Afghanistan

Zabihullah Mujahid said that the group would look to establish ties with other countries and announce the formation of a new government.
Read more

Searching your Gmail inbox is about to become way...

Gmail users will soon be able to filter email and search results on Android to easily find exactly what they're looking for.
Read more

Workers in Thailand's Covid-hit tourism industry talk about their hopes and fears for the future.
Read more

A year after Mary Johnson’s disappearance, federal officials are...

Mary Johnson was on her way to a friend's home in Oso, Washington, the day before Thanksgiving, but she never made it. A year later, her disappearance remains a mystery.
Read more

Police are searching for three gunmen who fired into a crowd, killing two, in Miami-Dade county.
Read more

Protected areas cover a sixth of Earth’s land and...

"Tens of thousands of good jobs will be eliminated. We are protesting against that," the head of a Solidarity union chapter said.
Read more

Eiffel Tower to Reopen in Mid-July After Suffering Heavy...

Want the lowdown on European markets? In your inbox before the open, every day. Sign up here. The Eiffel Tower is getting ready to...
Read more

An executive with Discovery Inc. says the U.S.-owned company will fight hard to keep control of a television network it owns in Poland, a $3 billion investment that is threatened by a new media bill that passed in parliament this week
Read more

Carmen Hernandez was given a standing ovation as she left hospital in Colombia.
Read more

The U.S. intelligence community is more than halfway through a 90-day review of the origins of COVID-19.
Read more

The Papers: Foreign travel hope, and ‘no Indyref2 before...

An Austin, Texas man who was charged for his role in the Jan. 6 attack on the Capitol has died in a motorcycle collision, ...
Read more

Tensions emerged in Minneapolis on Thursday evening after police fatally shot a suspect while attempting to serve an arrest warrant. Members of a U.S. ...
Read more

The Sacramento Kings have fired coach Luke Walton after getting off to a disappointing start in his third season in charge, a person familiar with the decision told The Associated Press on Sunday.
Read more

Technology suppliers can be slow to inform customers when they are the victim of a cyberattack. Breach-notification laws in the U.S., Europe and other jurisdictions generally require companies to notify people if their personal data is exposed but don’t say m…
Read more

This weekend we are celebrating 66 years of magic at the Disneyland Resort, and 66 years since the opening day of Disneyland park. This year may feel a bit more poignant than previous years as you join our cast members in continued rejoicing for the legendary…
Read more

Hong Kong’s Apple Daily board may stop publication this...

The Jackery Solar Generator 1500 is an excellent way to power electronics and other gear when camping or going off-grid. It can also offer reassurance in the event of a power emergency at home.
Read more

Daniel Craig’s era as Bond comes to an end

As Craig takes his final bow as the iconic British spy, speculation continues to mount around who will succeed him in the next installment.
Read more

One of Our Favorite Standing Desks Just Got Cheaper

The 55-inch adjustable desk is one of our favorites. It has three height presets and is well made.
Read more

Several Black police officers say they faced racism by colleagues during their time at the University of Washington, ...
Read more

Rolling blackouts for parts of US Northwest amid heat...

As the Pacific Northwest swelters in an unprecedented heat wave, an electrical utility in the Washington state city of has announced that there will be more rolling blackouts that will cut off electricity and air conditioning
Read more

Ghana is positioning its busiest port to become a hub in West Africa with a $1.5 billion expansion project.
Read more

UK arrests over 100 in protests against policing bill

This Sony patent could one day see AI play...

A new patent from Sony puts forward a way to train AI to play games for their players.
Read more

The Taliban have ordered all female city workers in Kabul who cannot be replaced by men to remain at home, an indication that the militant group now in control of Afghanistan is bringing back its extreme interpretation of Islam that it employed...
Read more

After student says she was assaulted, alleged confession leads...

Shannon Keeler is looking for her day in court after eight years.
Read more

Tornado rips off roofs, knocks out power in New...

The National Weather service has confirmed an early morning tornado pounded parts of New Orleans, ripping off roofs, knocking down trees and utility poles and causing other damage
Read more

Two gang members snatched the child at knifepoint as they returned home from school.
Read more

US backs Philippines in standoff over South China Sea...

The United States is backing the Philippines in a new standoff with Beijing in the South China Sea, where Manila has asked a Chinese fishing flotilla to leave a reef
Read more

The Court unanimously sided with the Catholic adoption agency, but a narrow ruling leaves an unclear precedent. The post The Supreme Court’s Mixed Defense of Religious Freedom appeared first on The American Conservative.
Read more

CBS’s ‘The Talk’ goes on hiatus amid review

CBS's "The Talk" will go on hiatus for a couple of days as the network continues its review after co-hosts Sharon Osbourne and Sheryl Underwood got into a heated exchange during an episode last week, a CBS spokesper...
Read more

Massive dust cloud headed toward US

A cloud of dust kicked up from the Sahara Desert traveled across the Atlantic and hit central Florida, WFTV in Orlando ...
Read more

Biden to go to Tulsa to mark 100th anniversary...

It's been 100 years since a white mob burned down a Black neighborhood in Tulsa.
Read more

Johnson & Johnson is asking the Supreme Court to review a $2 billion verdict in favor of women who claim its talc powder products caused them to develop ovarian cancer, The Associated Press reports.The multinational corporation is arguing that...
Read more

The House Ways and Means Committee on Monday released legislation aimed at paying for Democrats' $3.5 trillion in social spending priorities, including by raising the corporate tax rate to 26.5 percent.The l...
Read more

Environmental advocates are shifting their focus to a multi-trillion, Democrat-led spending package after seeing that a smaller bipartisan infrastructure deal is unlikely to include many of their priorities.The bipartisan agreement is expected to...
Read more

Roughly 35,000 people took to the streets in Belgium on Sunday to protest tighter COVID-19 restrictions as the country again grapples with a surge of new cases this fall.Demonstrators set garbage...
Read more

Gov. Greg Abbott, the Texas Republican, criticized state Democrats who fled to Washington, D.C., on Monday in an effort to deprive the Legislature of a quorum, thus the ability to vote on the GOP's sweeping elections overhaul bill.
Read more

Garena Free Fire collaboration with Attack on Titans is...

A new update is now live on Garena Free Fire that brings characters and outfit from Attack on Titan to the game as the collaboration goes live.
Read more

Singapore to Donate Vaccines Via Covax, Urges Others to...

Puerto Rico to lift face mask requisite for those...

Who gets a seat on Pelosi’s Jan. 6 commission?

Trump Praises His Relationship With Kim Jong Un for...

Despite criticism that he was overly friendly with Kim, Trump has defended his relationship with the North Korean dictator.
Read more

Taking over Afghanistan was the easy part. Now the Taliban must figure...