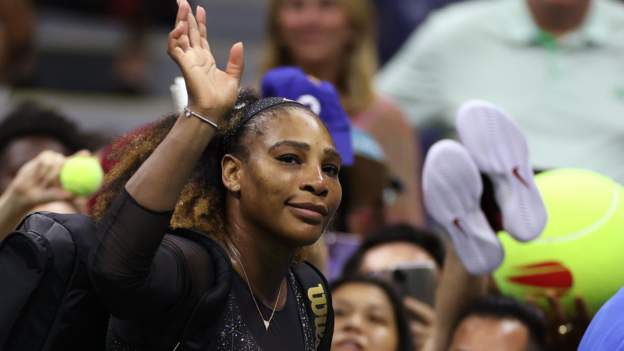 Serena Williams has won 23 major singles titles, one short of Margaret Court’s record, but is still considered by many as the greatest player of all-time

From the glowing video tributes and an array of A-List stars in attendance, everything on a celebratory night at the US Open pointed towards Serena Williams’ impending retirement.

Williams’ first-round match on Monday – which could have been the final of her storied career – was the centrepiece of an emotional fanfare on Arthur Ashe Stadium in New York.

The 23-time Grand Slam singles champion recently announced she plans to “evolve away” from the sport and her home major is expected to be a farewell.

But after beating Montenegro’s Danka Kovinic in the first round, 40-year-old Williams continued to play a guessing game.

Asked if this was definitely her final tournament, she smiled and said: “I’ve been pretty vague about it. I’m going to stay vague because you never know.”

Night matches on Ashe always create an electric atmosphere, but this was another level to many others and provided a sense of theatre and drama not often seen at a tennis event.

It started with a video montage paying homage to Williams’ achievements as a player and a person, while she waited backstage before arriving in a caped glittery dress and diamond-encrusted trainers.

A string of big-name celebrities from fashion, film, television, music and politics were watching from the crowd, before tennis legend Billie Jean King and television icon Oprah Winfrey paid tribute in another post-match celebration.

That came after Williams showed she could still win at the highest level, overcoming a scrappy start to beat world number 80 Kovinic in straight sets.

Asked if nights like these had changed her mind about her retirement plans, the former world number one said: “It’s extremely difficult still because I absolutely love being out there.

“The more tournaments I play, I feel like the more I can belong out there. That’s a tough feeling to have, and to leave knowing the more you do it, the more you can shine.

“But it’s time for me, you know, to evolve to the next thing. I think it’s important because there are so many other things that I want to do.”

Williams living in the moment – but what’s next?

With this potentially Williams’ goodbye, it was not surprising the US Open – which she has won six times – wanted to honour one of their greatest champions in front of an adoring crowd.

But her victory also begs the question what will happen after when – or perhaps if? – she does lose in New York this fortnight.

“It was so loud. I just was overwhelmed in a good way,” Williams said about the reception when she walked out.

“I was just thinking, like: Is this for real? At the same time, I’m also thinking: I still have a match to play.”

At the 2021 Australian Open, Williams said she would not tell anyone when it was time to retire and became upset when pressed further in Melbourne.

Many thought that day had already arrived with her having not played for almost a year, but then she returned to the tour in preparation for this year’s Wimbledon.

Then came last month’s announcement in Vogue of her plan to “evolve away” from the sport.

Sources close to the former world number one have told BBC Sport it is definitely the end for Williams, who wants to extend her family with husband Alexis and give four-year-old daughter Olympia a brother or sister.

Many players, including Williams, have successfully returned to the sport after becoming a mother but none as old as a player who turns 41 next month.

Perhaps the US Open’s plan was to celebrate her career in the glow of a victory? And then leave Williams – who says she was “really emotional” following recent defeats in Toronto and Cincinnati – to slope off relatively quietly following any exit at Flushing Meadows.

On Wednesday, she will face Estonian second seed Anett Kontaveit, who has struggled for consistent form this year in spite of her ranking.

“At this point, honestly, everything is a bonus for me I feel,” Williams said when asked about the second-round match.

“I mean, I think every opponent is very difficult. I’ve seen that over the summer. The next one is even more difficult.

“It’s good that I was able to get this under my belt. I don’t know, I’m just not even thinking about that.

“I’m just thinking about just this moment. I think it’s good for me just to live in the moment now.” Opinion | The News Industry Gets a New Pope

Murder-accused father did not call 999 as baby turned...

Half in new poll say they’re frustrated with Biden’s...

Musk to hold first meeting with Twitter staff this...

Biden mocked for story about leaving dead dog on...

White House warns it has to cut back virus...

A break in the storm clouds – Reuters

California bill would let children 12 and up get...

Lawmakers in both parties see limits on US help...

Greene ‘Tired’ of Candidates Like Mandel Who ‘Learned to...