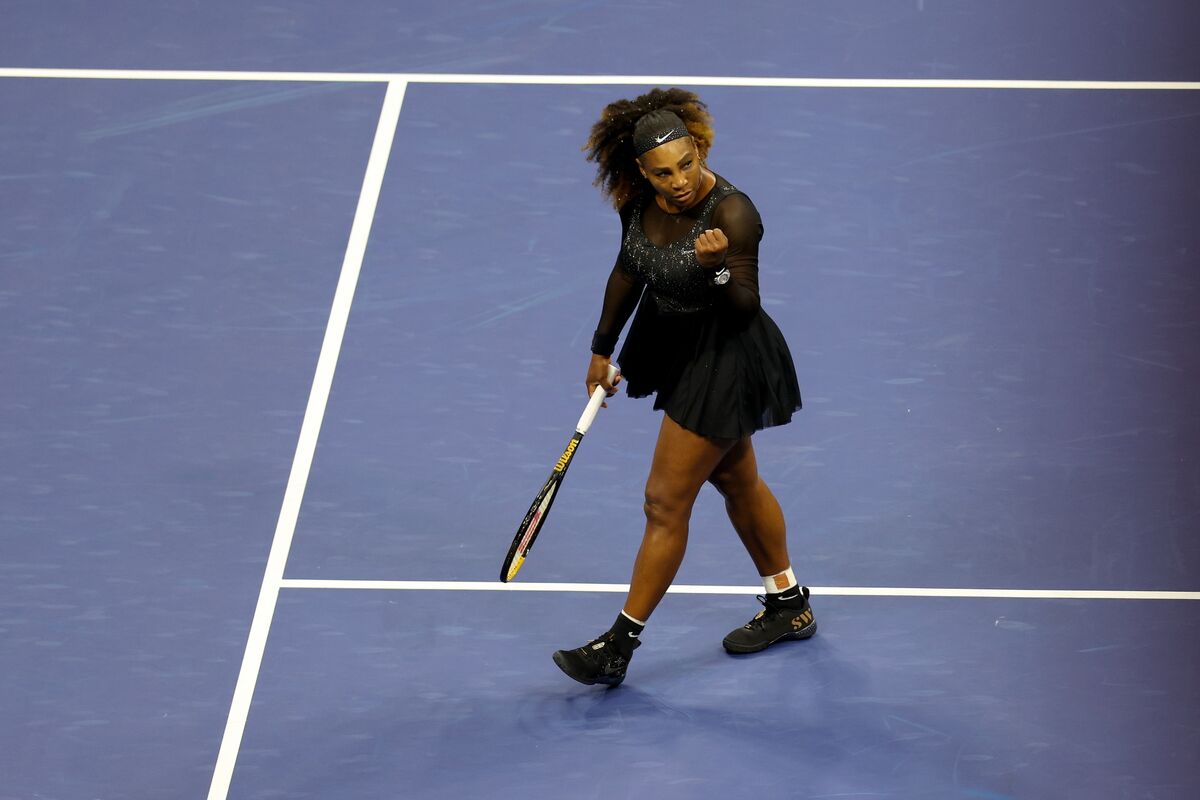 New York (AP) — They came from far and wide for Serena no last name required, befitting someone as much an icon as superstar athlete to see her practice and play and, it turned out, win a match at the U.S. Open on Monday night, turning out in record numbers to fill Arthur Ashe Stadium and shout and applaud and pump their fists right along with her.

Serena Williams is not ready to say goodbye just yet. Nor, clearly, are her fans. And she heard them, loud and clear.

In her first match at what is expected to be the last U.S. Open and last tournament of her remarkable playing career, even if she insists that she won’t quite say so, Williams overcame a shaky start to overpower Danka Kovinic 6-3, 6-3 amid an atmosphere more akin to a festival than a farewell.

What memory will stick with her the most from the evening?

When I walked out, the reception was really overwhelming. It was loud and I could feel it in my chest. It was a really good feeling, said the owner of six U.S. Open championships and 23 Grand Slam titles overall, numbers unsurpassed by any other player in the sport’s professional era.

Its a feeling Ill never forget, she added. Yeah, that meant a lot to me.

This opening outing against Kovinic, a 27-year-old from Montenegro ranked 80th, became an event with a capital E. Spike Lee participated in the pre-match coin toss. Former President Bill Clinton was in the stands. So were Mike Tyson and Martina Navratilova, sitting next to each other. And sitting with Dad and Grandma was Williams’ daughter, Olympia, who turns 5 on Thursday, wearing white beads in her hair just like Mom did while winning the U.S. Open for the first time at age 17 back in

Williams is now 40, and told the world three weeks ago via an essay for Vogue that she was ready to concentrate on having a second child and her venture capital firm.

Asked after her victory Monday whether this will definitively be her final tournament, Williams replied with a knowing smile: Yeah, Ive been pretty vague about it, right?

Then she added: Im going to stay vague, because you never know.

The night session drew 29,000 folks, a high for the tournament more than 23,000 were in Ashe; thousands more watched on a video screen outside the arena and the place was as loud as ever. Certainly louder than any other first-round match in memory.

Both players called the decibel level crazy.” Kovinic said she couldn’t hear the ball come off Williams’ racket strings or even her own.

Early, Williams was not at her best. Maybe it was the significance of the moment. There were double-faults. Other missed strokes, missed opportunities. She went up 2-0, but then quickly trailed 3-2. Then, suddenly, Williams, looked a lot like the champion she’s been for decades and less like the player who came into this match with a 1-3 record since returning to action in late June after nearly a year off the tour.

At this point, honestly, everything is a bonus for me, I feel, Williams said. Its good that I was able to get this under my belt. … Im just not even thinking about that. Im just thinking about just this moment. I think its good for me just to live in the moment now.

She rolled through the end of that opening set, capping it with a service winner she reacted to with clenched fists and her trademark cry of Come on! That was met with thunderous cheers and applause as was the ending of the 1-hour, 40-minute contest, as if another trophy had been earned.

Instead, there is plenty more work to be done. Williams will play in the second round of singles on Wednesday against No. 2 seed Anett Kontveit of Estonia. And there’s also doubles, too: Williams and her sister, Venus, are entered together in that competition, with their initial match slated for Wednesday or Thursday.

Just keep supporting me, Williams told the spectators, as long as Im here.

They surely will. They were there to honor her and show appreciation for what shes done on the court and off. After watching the victory over Kovinic, spectators held up blue, white or red placards that were distributed at their seats to spell out We (Heart) Serena.”

After Kovinic was introduced simply by name, making clear to even her what an afterthought she was on this muggy evening, Williams entrance was preceded by a tribute video narrated by Queen Latifah, who called the American the Queen of Queens. The arena announcer called Williams the greatest of all time, and intoned: This U.S. Open marks the final chapter of her storied tennis history.

She means a lot to a lot of people. As a tennis player. As a woman. As an African American. As a mother. As a businesswoman.

When she started out, female athletes werent getting recognized. Shes done so much, said Quintella Thorn, a 68 -year-old from Columbus, Georgia, making her eighth trip to the U.S. Open. And now, shes …

Which is why Monday mattered more than the usual Day 1 at a major tournament. And why the daily program did not make mention of any other of the dozens of athletes in action, showing instead a montage of six images of Williams holding her six U.S. Open trophies above the title: Serena Williams, A Legacy of Greatness. And why there was a sense of less importance for matches involving wins for other elite players such as past U.S. Open champions Bianca Andreescu, Andy Murray and Daniil Medvedev, or French Open finalist Coco Gauff, an 18-year-old American.

After her own 6-2, 6-3 victory over Leolia Jeanjean earlier in the day, Gauff looked forward to sitting in Ashe herself to watch Williams, someone she credits with inspiring her to play tennis. Gauff’s original plan was to tune in on TV, but then she decided this was too important to miss.

Everybody is going to be on her side. Im going to be cheering for her, Gauff said. Its going to be probably one of the most electric matches that will ever happen in tennis.

Lived up to the billing.

Now there is more to come for Williams and her supporters. Scenes of sickening violence at the Capitol open January...

China’s gamers will lose World of Warcraft as Blizzard...

What is causing the baby formula shortage?

Colorfulkoala and more: The best yoga pants on Amazon...

US, NATO seek to shore up defenses as Russia-Ukraine...

Workers clash with police at iPhone factory in China

Our struggle creating lasting relationships is not our fault,...

Planning to use your startup equity as collateral? Good...

Dahle tries to get his digs in

After weeks of review, Adidas concludes it ‘does not...

Making room at the cap table: A new plan...

Biden plan to spend $725M to clean up abandoned...

Why Singapore’s gay sex law change is a double-edged...

Cold showers as German city of Hanover reacts to...

Inside the Octopus, the Luxury 414-Foot Superyacht With a...

Milley: Russian strategic objectives in Ukraine ‘have been defeated’