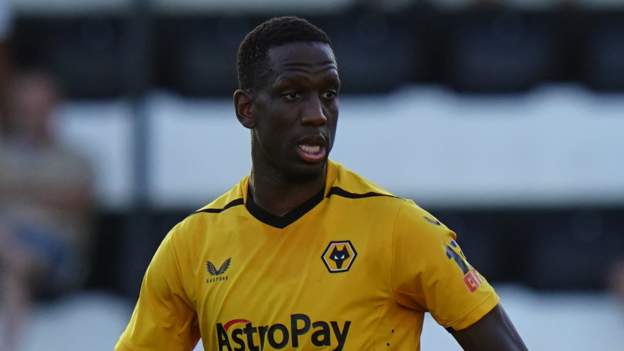 I’m very proud of what Wolves did – Lage

Wolves boss Bruno Lage has revealed defender Willy Boly failed to report for Sunday’s game against Newcastle despite being told he was picked for the matchday squad.

Nottingham Forest have already had a £1m bid for the Ivory Coast centre-half turned down by Wolves and it is expected Boly will leave Molineux before the transfer window closes on Thursday.

Nevertheless, Lage wanted Boly’s experience on the bench for the draw with Newcastle.

“He has been a great professional but in the end he wants to force something,” said Lage.

“They have to be professionals. I take my decision to put him in the squad list and he takes his decision.”

Lage’s squad reported for the Newcastle game on Saturday night. Boly did not join the squad and did not contact his manager to explain why.

“He has a proposal in his hands and he wants to go, that is my feeling when I talk to him,” said Lage.

Boly’s future is one of a number of issues to be resolved at Molineux before Thursday’s 23:00 BST deadline.

Lage confirmed young defender Luke Cundle is likely to join Swansea on loan, while the futures of a number of fringe players will also be decided.

Wolves are in the hunt for a new striker, with Stuttgart’s Austria international Sasa Kalajdzic among the players being discussed.

Ironically, Kalajdzic asked not to be considered for his side’s Bundesliga draw with Koln on Sunday afternoon because of the uncertainty over his future.

“I am waiting for another striker since my first day here,” said Lage.

“The way we play we need to have at least two good strikers in our squad and I have plenty of confidence the player will arrive.”

Schar should have seen red – Neves

There is at least some certainty over skipper Ruben Neves, who put Wolves ahead against Newcastle, only for the hosts to be denied victory by Alain Saint-Maximin’s brilliant last-minute equaliser.

Neves has been linked with a move away from Molineux, with Manchester United understood to be among the interested parties.

However, the Portugal midfielder, who has replaced Conor Coady as captain, now seems set to remain with Wolves.

“Ruben is playing very well,” said Lage. “You can see he is in a good moment and I am 99% sure he will stay with us one more year.”

Neves complained about the second-half tackle by Newcastle defender Fabian Schar on Pedro Neto, which he was adamant should have led to a red card.

Referee Peter Bankes opted not to send Schar off for the challenge, which left Neto needing treatment. The incident was reviewed by VAR but Bankes was not asked to look at it again on the pitchside monitor.

“Everyone saw it – I truly can’t believe,” Neves told BBC Match of the Day. “He was really lucky to be fit after that challenge.

“Like I said to the ref, there is no chance of him to not go to the screen and watch the images because he almost broke the leg – I spoke to Schar as well, he said it was not on purpose, of course it was not, but when it is so dangerous, someone needs to see it.” Crypto contagion from FTX’s implosion threatens other companies: ‘There are...

European peace seems as fragile as ever

Iran blames US for delays in reaching nuclear deal

Caught in an avalanche? You’ve got 30 minutes to...

Meta’s Horizon Worlds quality is so poor, not even...

Climate protesters rally in Brussels ahead of COP27 –...

Disney Leader Empowers Cast to Give Back to Community

The Failure in Uvalde Was Societal

‘Traumatizing’ Buffalo massacre strikes a chord with families who...

Digimon Fans Still Exist—and They’re the Keepers of Its...

Africa Has a List of Climate Demands, But Little...

My experience of restrictive avoidant eating and ADHD

Ne-Yo Under Fire for Saying He Listens to R....

First They Purchased House. Then Bought Up Entire Town…