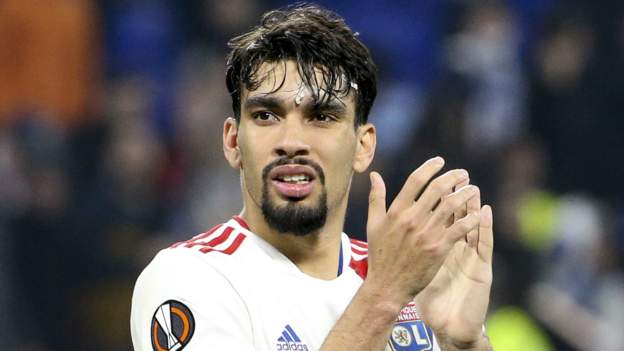 West Ham are on the brink of completing a £36.5m deal for Brazilian midfielder Lucas Paqueta.

The 25-year-old is due to have a medical on Sunday before completing the switch from French club Lyon.

The deal for Paqueta also includes a potential £14.4m in add-ons which, if triggered, would turn the transfer into a club record for the Hammers.

He is expected to be part of the Brazil squad for this year’s World Cup.

He has scored seven times in 33 games for Brazil and played for Lyon against West Ham in last season’s Europa League quarter-final, which the Hammers won 4-1 on aggregate.

He has scored 21 times and contributed 14 assists in his 80 appearances for Lyon.

Hammers boss David Moyes spoke this week about the difficulties he has encountered signing players this summer as he bids to maintain momentum at a club gearing up for another European campaign, although Paqueta would be the club’s eighth signing of the summer. Elon Musk threatens to back out of Twitter deal...

Nearly 100 out of Mariupol steelworks plant, but soldiers...

4 reasons the Dolphins should be concerned about the...

Manchin’s side deal on brink as GOP seeks his...

They Were ‘Calling to Help.’ Then They Stole Thousands

Syndicate raises “informal” round from over 50 partners to...

Fred Savage was ‘quick to anger’ while on TV...

NASCAR’s regular season finale moved to Sunday due to...

New Space For The Engine and North End Outdoor...

Jamal Edwards: ‘Make sure you believe in yourself’

The Medicine of Mercy