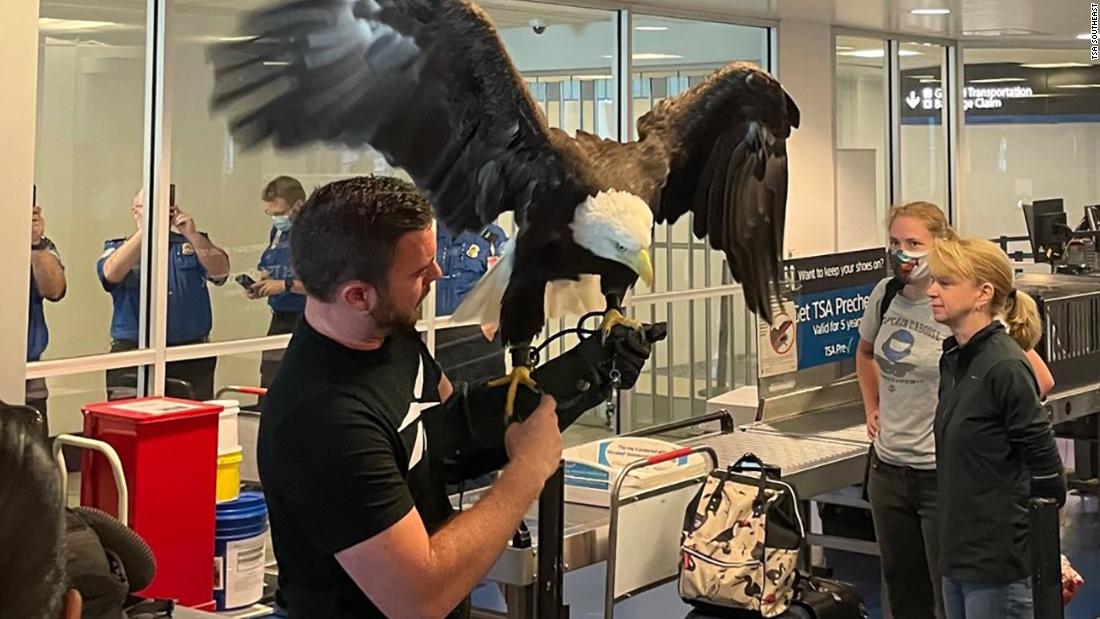 (CNN) Turns out eagles have to fly commercial sometimes, too.

Passengers at the Charlotte Douglas International Airport in North Carolina had an unexpected interruption to the tedium of the Transportation Security Administration checkpoint when a bald eagle, perched on its handler’s arm, spread its wings in the security line on Thursday.

“His airline notified us and we screened him and his handler,” wrote the agency. “Clark is trained to spread his wings, and even showed off a bit during screening.”

The agency also posted a video to Instagram of Clark showing off his impressive wingspan.

High Point University, a Methodist university based in North Carolina, reported that Clark was returning home from a trip to their campus when he was spotted at TSA. He flew over the heads of 1,600 freshmen students at their convocation ceremony, the university wrote on Twitter.

The World Bird Sanctuary where Clark lives cares for over 200 animals outside of St. Louis, Missouri. It treats and rehabilitates injured birds in its wildlife hospital and also permanently hosts a number of non-releasable residents — like Clark.

But he was born with scale deformities on his feet that made him non-releasable, according to the sanctuary. So, instead he became one of the organization’s “flying ambassadors” and travels across the United States to fly at different events, like High Point’s convocation ceremony and professional baseball games.

How to Watch December 3 NBA Games Online and on TV

The secret’s out: Pentagon unveils its newest stealth bomber

BOJ upgrades view on most regional Japan areas as...

Congress races to get bills passed before recess

Suffering from Long COVID headaches and brain fog? Another...

Texas-Alabama: A wild end zone play, KD on the...

US Is Weighing a Terrorism Label for Russia’s Wagner...

‘We demand wages for housework’

A video game industry veteran on making the art...

Trump jokes US should ‘put the Chinese flag’ on...

U2’s Bono, The Edge do surprise concert for Ukrainian...

Twitch will launch an improved reporting and appeals process...

Jason Clarke on Going ‘Too Far’ With Jerry West’s...

A Look at the Markets, Ukraine, and Meta (Podcast)

Ezekiel Elliott has knee injury, uncertain to play vs....

Warren ‘very worried’ the Fed will cause a recession

‘The Most Successful Extremist Group in the Digital Age’

NRA says it is “committed to making schools secure”...