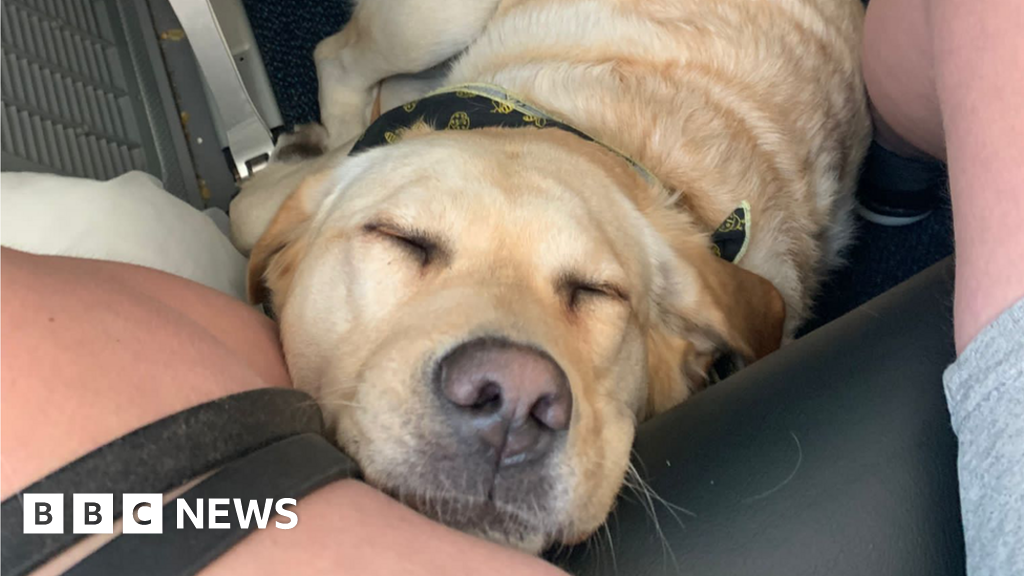 A blind woman has criticised an airline after her dog was left “squashed” in a cramped space for two transatlantic flights.

Chloe McBratney’s labrador Emily was confined to a footwell on her flight from London to Canada and back.

Ms McBratney accused WestJet of discrimination after it failed to move them to a seat with extra leg room.

WestJet has apologised, but said arrangements were not made with the required notice of 48 hours in advance.

Ms McBratney, a goalkeeping coach at Barry Town United’s pan-disability team in south Wales in the UK, said she was “incredibly worried” for Emily’s welfare.

“Emily was at my feet the entire time, however for anyone travelling on a plane it’s not enough space anyway and then put a dog at your feet it’s even less space,” she said.

She said that when she sat Emily down on the outbound flight she “couldn’t turn around properly, when I took her harness off I could tell by her demeanour that she just wasn’t comfortable at all”.

The pair were then placed in a similar seat on the way home on Wednesday.

Image caption, Chloe McBratney says her request for extra legroom was denied by the airline

Ms McBratney said she was told the airline could only help if she cancelled her booking with a third party and rebooked a full-price ticket.

“I booked my ticket five months ago and then rang the airline… I requested there and then for extra leg room,” she said.

Ms McBratney said the airline told her they could not provide this at the time and was told closer to the time there was nothing it could do because she booked through a third party.

“It was an eight-hour flight, which for anybody is a really long time. It made it incredibly hard for both her and me as well.”

Image caption, There is no obligation to provide spacious seats for passengers with guide dogs, but the Civil Aviation Authority said many airlines do

John Welsman from Guide Dogs UK said it was a “very complex” situation, as there were various regulations airlines have to comply with.

However, he added, it was “at the airline’s discretion” if they provide additional floor space for guide dogs.

“But they do need to demonstrate that they have done due diligence in the booking process to show that they’ve gone through all the things they need to.”

“It’s down to the airline what they think is adequate space for the dog when they are booking me on to the flight.”

While there is no obligation for airlines, the Civil Aviation Authority said “many airlines” would seat passengers with guide dogs in the front row, when possible.

Westjet said “all guests travelling with service dogs provide us with at least 48 hours advance notice before their flight departs”.

It said the third party the flight was booked through did not contact it to make special arrangements, meaning Ms McBratney’s options were limited to “purchasing an additional seat or upgrading to a seat with additional leg room”.

The company apologised “for any confusion or inconvenience this guest experienced during their travel”.

‘Political Malpractice’: Inside the Fall of the Levin Dynasty

Christian Population of England and Wales Drops Below 50%

UN alarm as Iran cracks down on anti-hijab protests...

World Cup’s 101 Most Memorable Moments: Game of the...

Mask mandates to ease, sort of

Trump defends praise of Putin even as he calls...

Do not intervene with Just Stop Oil protests, Met...

Putin, Xi to meet at in Uzbekistan next week,...

They once fought to defend South Korea. 70 years...

The Google Pixel 7 has an official launch date...

How to help those affected by California wildfires

Inflation is so bad you may want dine out for...

Amazon to limit purchases of Plan B and other...

Iraqi merchants struggle on amid series of strong sandstorms

Twitter is testing a ‘CC’ button that will let...

Judge tells Giuliani to appear in Georgia, by “train...

Is ‘Under the Banner of Heaven’ Based on a...

Pivo powers up Nigerian freight carriers with a bespoke...

Can Biden capitalise on legislative victories?

Dispute at mall ends when woman pulls out gun; no injuries