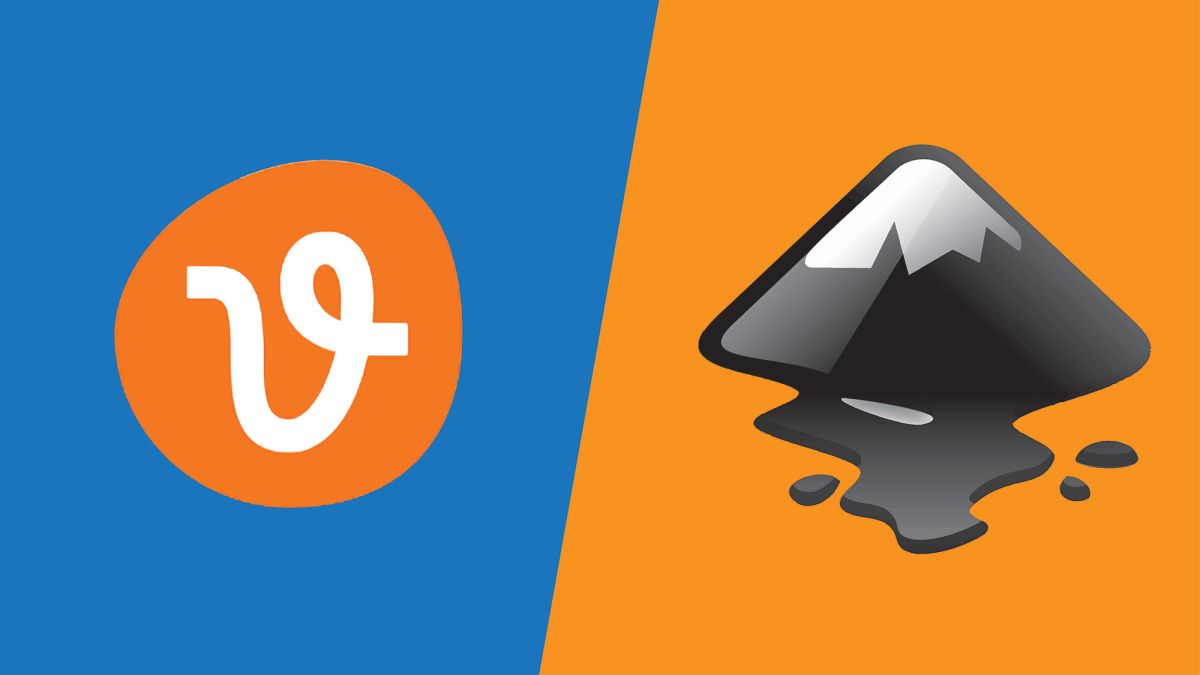 The programs that are available for making vector graphics are numerous. Out of those, Adobe Illustrator is the most popular which has also led to it becoming the industry standard.

However, it comes with a fee and, apart from using the free trial version of it, you’d have to pay some bucks to be able to make use of its features. Fortunately, there are some great free options available, out of which, Vecteezy and Inkscape are often considered as two of the best free Adobe Illustrator vector alternatives around.

Founded in 2007, Vecteezy is an online platform for creating and editing royalty-free vector graphics and stock footage (opens in new tab). Inkscape, founded in 2003, is primarily a vector art editor (opens in new tab) in the SVG (Scalable Vector Graphics) format but offers other formats as well, but as a downloadable program to run locally on your PC.

So how else do the two vector art programs stack up? Let’s dig in and see.

Vecteezy vs Inkscape: Platforms and support

Both programs are currently available for desktop use and have not been designed for other devices as of yet. Inkscape is an open-source application which means it has multiple advantages for users but comes with its fair share of cons as well.

Being open-source means it has greater chances of being affected by bugs, hence its users are advised to keep saving their work to avoid any kinds of unexpected losses. Vecteezy, on the other hand, isn’t open-source and doesn’t offer a public API, and so is a bit more stable in its application.

Inkscape is regularly updated, offering up to three to four updates in some years with a total of 17 updates since its launch. Vecteezy releases updates quite often as well.

Out of the various tools that the program features, the Selection Tool, Type Tool, Illustrations Tool, and Pen Tool are the most common. The Selection Tool allows users to select items and perform actions on them. These actions include deleting, resizing, modifying, and moving.

The Type Tool is used for changing the color, size, transparency, etc. of the font. To look up and add illustrations to the design, the Illustrations Tool is used. Lastly, the Pen Tool enables users to draw lines, curves, and shapes.

Inkscape also allows users to create objects by providing various tools. The program allows editing simple shapes such as rectangles and circles, creating objects such as grids and curves, and enhancing objects with color and patterns.

It also enables users to manipulate objects, including moving, rotating, resizing, and skewing objects and paths. Users can also make changes to text by tweaking text color, style, spacing, and so on. The layers feature enables users to stack various objects on a canvas and make certain objects visible/invisible.

Vecteezy vs Inkscape: Professional use

We have already seen how Inkscape is useful for a variety of tasks and offers excellent platform support. Considering you don’t have to pay for its service, it sounds like the ideal software to work with. However, it features one major drawback. It does not support CMYK as a color mode. Since SVG is its default file format, it only works with RGB.

The disadvantage of this feature is that it no longer renders Inkscape to be suitable for print. This includes all your brochures, business cards, flyers, and so on. The software is only recommendable if it’s used for online graphics. Hence, if you’re looking to print professional marketing material, Inkscape would not be a wise choice.

Apart from this certain shortcoming, Inkscape is generally a decent option for professionals. However, given its no-cost nature and the advanced features of other similar vector programs such as Adobe Illustrator, it usually takes a back seat when being considered for professional use. It stands out more to hobbyists or to someone requiring software for very basic vector graphics.

Vecteezy can be considered a little more professional than Inkscape. Offering a wider range of services and even more with the paid version, Vecteezy is often used professionally. It also doesn’t feature the CMYK drawback that Inkscape does, making it even more well-suited for professional use.

It’s fairly easy to download both programs. For Inkscape, all you have to do is visit its Inkscape download link (opens in new tab) and follow the necessary steps required to install the program on your desktop.

You can do this by clicking on the tab that says ‘Download’ and then choosing ‘Current Version’ from the drop-down list that appears. Next, select which system (Windows, Linux, etc.) you’re downloading for, and then follow the necessary steps for the download to start on your device. Similar to how we see with most programs, you can choose between downloading either a 64-bit or a 32-bit version of this software.

(opens in new tab) in order to avail its services, but signing up will grant you access to millions of free resources that you can make use of for vector art. However, if you wish to take things a step ahead and gain extra rights on the platform, you must sign up for a Pro account.

While this option requires you to spend money, it will grant access to unlimited downloads, priority support, an ad-free experience, and exclusive access to bundles among a couple of other perks. Simply visit their signup link America at the Tipping Point

Cindy McCain on her new U.N. ambassador role and...

The 19th Century Divorce That Seized the Nation and...

Steinbeck’s letter to son on love, ‘the best thing,’...

Is There Anywhere To Buy Kid’s Toys Anymore?

Internet Blasts Woman Who Tried to Breastfeed Granddaughter and...

3 killed in shooting at Copenhagen mall