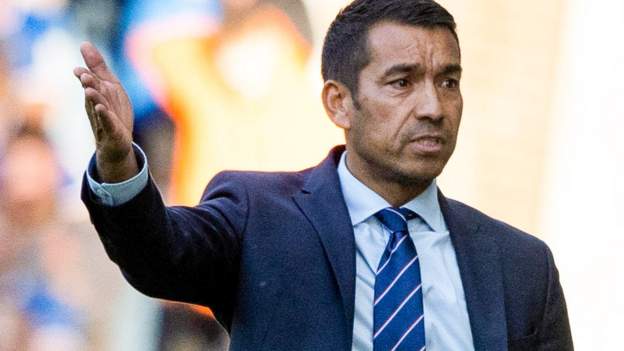 Manager Giovanni van Bronckhorst says Rangers are ready for “crazy things” to happen as the transfer deadline looms on 1 September.

Talks are “ongoing” with players such as Alfredo Morelos and Ryan Kent, who are in the final year of their deals.

“Especially when you get to the latter stages of the window, crazy things will happen, we’ve seen that everywhere and in the last windows as well.

“But so far nothing is happening with ins or outs.”

Rangers, who this week secured captain James Tavernier on a new long-term contract, bid to extend their 100% Scottish Premiership start at Hibernian on Saturday before travelling to Eindhoven for Tuesday’s Champions League play-off second leg with PSV.

Croatia striker Antonio Colak, signed from PAOK last month, scored for the fourth successive game in the 2-2 first-leg draw and is currently keeping Alfredo Morelos out of the side.

“It’s obviously a good start for him and he’s settling in really quickly,” Van Bronchorst said of Colak. “He’s giving us important goals.

“I think all the new players have settled in really well and fit into our style of play so we just need to continue developing them and make sure performances become stronger and stronger.

“We can pick so many players that can start games and that’s the kind of competition you want.”

“They have new players coming in, a new coach and a new style of play,” he added.

“We have quite a good view on their style so we’re going to make sure we’re ready for everything they throw at us.

“It’s a period we are used to with big games in the league in between European games. I think we have a good squad to cope with these games so we will be ready.”

Google Photos takes another step towards solving its screenshots...

TikToker Says This Hack Could Get Your Amazon Order...

Hisense Laser TVs got a Dolby Vision upgrade. Other...

UN body says violence against Syrians in Lebanon on...

Voice Tech Is Part of the Future of Doing...

Video of Nancy Pelosi’s Gestures During State of the...

This is what happens to your pillows when they...

Don McLean looks back at his masterpiece, ‘American Pie’

Romney on Capitol attack anniversary: ‘Ignore the lessons of...

Cheetahs from South Africa go to parks in India,...

Japan investing in stem cells to help cope with...

What It’s Like to Give Up Air Travel to...

McDaniel acknowledges that the RNC was helping ‘gather contingent...

Shot dead by Sri Lankan police while trying to...

The average ransomware group only lives for two years

Slovakia says it would give Ukraine its air defense...

Transcript: Eva Beylin On eGirl Capital, The Graph, And...

Ukraine: ‘Russian soldiers raped me and killed my husband’

I took up running to cope with my dad’s...